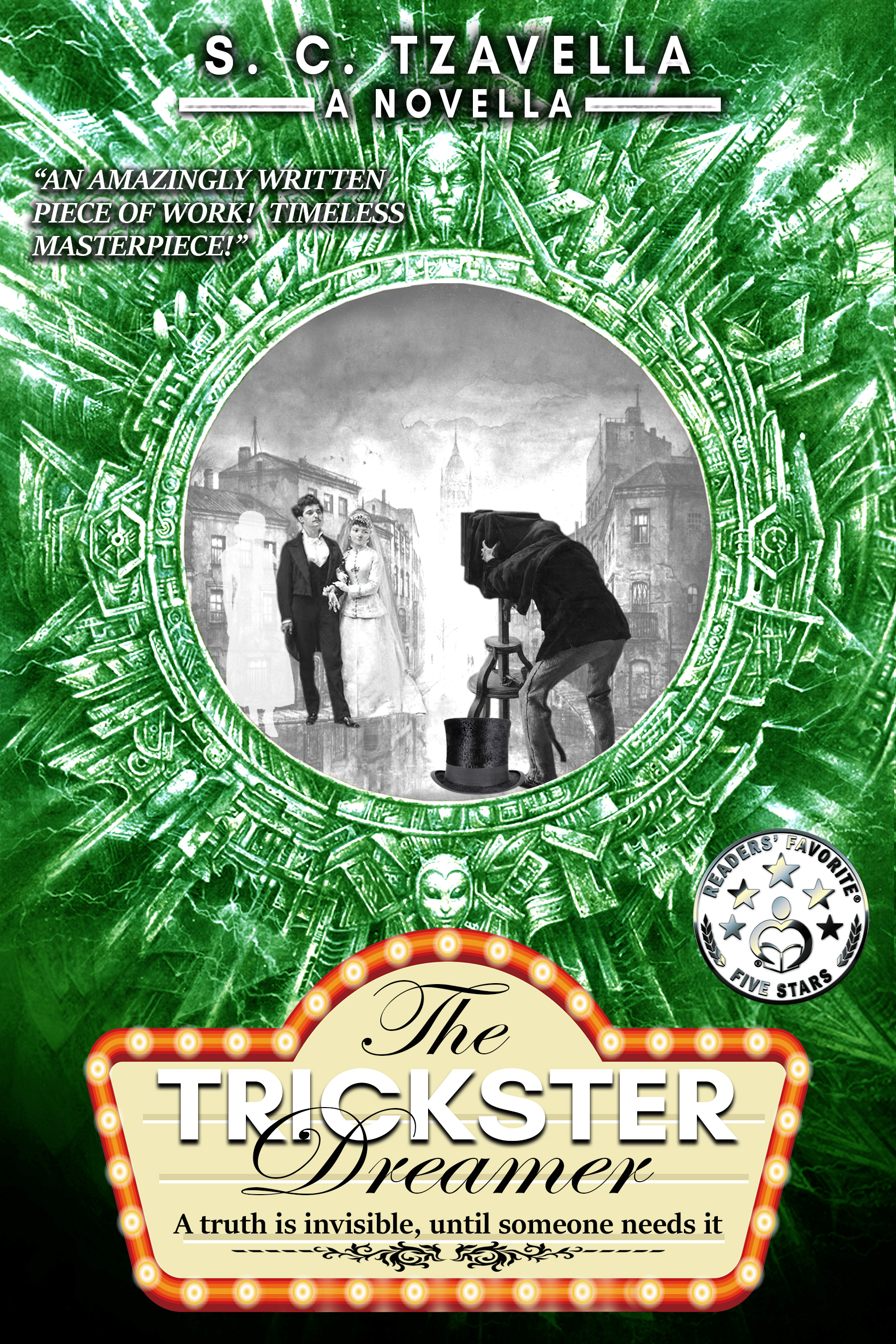 In a magical world called Shallowland, an eccentric spirit photographer, the Man in the Stovepipe Hat, and his wife, Magiana, struggle to prove that ghosts not only exist, but the dead can be captured along with their living relatives. Facing skeptical foes, rationalists, and an insidious beau, they are forced to reveal a profound mystery in a sensational trial for fraud and larceny.

Magiana arrives on the shores of Shallowland to meet her future husband, The Man in the Stovepipe Hat. But all the men on the quay are wearing stovepipe hats. Eager for happiness, she follows a spirit photographer, a man with a mission that life does not understand.


When Potupko, the real object of Magiana’s love-letters appears unexpectedly eager for revenge, he is tempted to expose the spirit photographer as a trickster. The Man in the Stovepipe Hat and Magiana sacrifice their love to defend a mystery that transforms sensationally their enemies into dreamers.

Name: The Man in the Stovepipe Hat

A truth is invisible, until someone needs it. The Trickster Dreamer is a surreally imagined inquiry into a human's dream of immortality on the edge of a precarious love, the supernatural and fraud. This timeless tale is inspired by spiritualism and the inventor of spirit photography in 1860's postwar Boston and New York, William Mumler, one of the most important historical figures in American spiritualism. We fictionalize and bring for the very first time on the big screen the life and struggles of Mumler who died a poor man, ridiculed, and at the same time, copied by his enemies. "An amazingly written piece of work! Timeless masterpiece! Amazing characters. This is a journey that you will never forget, a trip to Shallowland that will make you view life in a whole new light with an ending that will send shivers down your spine." -- Readers' Favorite "Poignant, vivid, irreverent, this masterful treatment of magical realism reveals the complexities of 19th century American science, spirituality, and society. It would make a magnificent film!" -- Robin Gregory, author (22 awards and nominations) "A most unique work of art! An extraordinary way of expression by the author made my reading experience a sensational one!" -- Demetra Gerontakis, author

S.C. Tzavella is an award-winning documentary filmmaker, screenwriter, creator of TV formats, TV host, visual storyteller, researcher of human consciousness, and writer of magical realism, based in Vancouver, Canada. In the last 5 centuries many members of her family were war generals, government leaders, revolutionaries, writers and directors, interacting with historical figures like Lord Byron, Ali Pasha of Ioannina, Catherine the Great, Pushkin, King Otto, Amalia of Oldenburg and many others. As a creator, S.C. Tzavella was born in her belief that ancestors and descendants lead concurrently their lives, changing the circumstances constantly in them throughout time and space. S.C. Tzavella’s quantum-physics inspired TV show, The New Files, has been described unanimously by some of the brightest spiritual leaders and researchers on planet, participants in the show, as "truly astounding and fascinating with an amazing grasp of the material, and the professional approach".

the Man in the Stovetop Hat and his wife, Magiana, struggle to prove the existence of ghosts with concrete photographic evidence. When the court calls their methods into question they must prove the unprovable. Magiana fell in love with her husband thinking he was someone else and this comes back to haunt their marriage.

The Book Profile identifies the man as the real world character of William Mumler who died innocent but destitute. The connection is not apparent in the book and helps add context to the spiritual realm the narrative focuses on to make the rising actions easier to follow.

The Man in the Stovetop Hat is employing new technology and new beliefs in one issue by using photography to prove spiritualism. Having to prove ghosts exist this way is a compelling court case.

The analogies add to the eccentric tone and voice of the story, but if stripped as would be the case in a visual adaptation, many of the scenes do not have much plot development and the elaborate character descriptions and emotions when reduced to a screen's frame rather than a paragraph shorten the narrative arc. The initial lack of context about the spiritual realm and Shallowland make the court case and real world development separation somewhat confusing.

The hook is that the Man in the Stovetop Hat must prove that ghosts exists with photography in an open court to show that he is not a fraud in his spiritualism. It is a compelling conflict to prove the unprovable.

As this is a piece of historical fiction and somewhat set in the fantasy of dreams and other realms this may have a smaller fanbase as a prestige drama. Period pieces generally have a smaller audience than a normal courtroom drama unless the case is well known to the public.

The characters are quite restrained as per their time period and thus their emotional range is likely not to garner acting nominations. This may get notice for design elements such as costume or props due to the research needed in reproducing old photography and film manipulation techniques.

THE PRESTIGE, MAGIC IN THE MOONLIGHT, VELVET EVENING SEANCE, ALICE IN WONDERLAND, A GHOST STORY

The originality stems from the notoriety of the Man in the Stovetop Hat's photography and his subsequent court case trying to prove his ghosts are as real as his developing techniques. Focusing less of the initial story on the love triangle and more on the consequences of the Man's spiritual convictions both with public reactions of believers and skeptics could help centralize the case and make the innocent decision more meaningful and surprising as the climax.

The Man in the Stovetop Hat is devoted to his wife and his work. The couple is loyal to their convictions even in their downfall. Magiana is dreamlike and dependable but too susceptible to others' influence.

The real life use of William Mumler and his court case as a premise is a rare gem but the execution of making the main conflict a love triangle lessens the originality of what the Man in the Stovetop Hat has to prove and what his proof will save.

Mumler is a fascinating character tied to Mary Todd Lincoln and so many more. Using his identity less fictionally, such as the focus in Shallowland, could help make the courtroom case easier to follow and allow a main conflict outside of a love triangle. Showing the consequences of his convictions before his court case could also help add investment to the verdict.