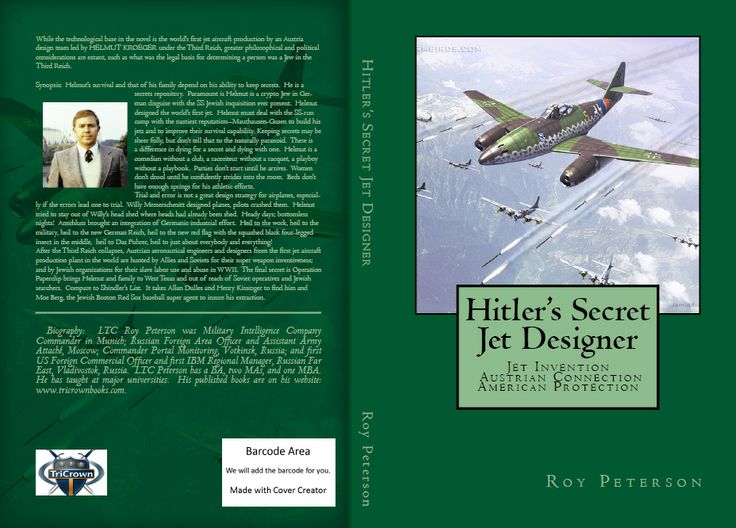 Helmut Kroeger invented the first jet aircraft in the world. Hitler acquired the invention and inventor, that if he had earlier might have defeated the Allies in WWII. The complete story is true. US intelligence background facts are provided. Only the name and dialogue make it historical fiction.

Helmut Kroeger is a crypto-Jew in German disguise with the SS Jewish inquisition ever present. Helmut designed the world’s first jet aircraft, then had to move it underground in WWII.


After the Third Reich collapses, Operation Paperclip brings Helmut and family to West Texas and out of reach of Soviet operatives to develop US jets. The Soviets sent agents to kill or kidnap Helmut, but were beaten by a US agent.

Helmut Kroeger’s survival and that of his family depend on his ability to keep secrets. He is a secrets repository. Helmut is a crypto-Jew in German disguise with the SS Jewish inquisition ever present. Helmut designed the world’s first jet, then moved production underground next to the SS-run camp where he tried to secretly help his Jewish compatriot prisoners used to build the early jets. Trial and error is not a great design strategy for airplanes. Messerschmitt designed planes, pilots crashed them. Anschluss brought an integration of Germanic industrial effort. After the Third Reich collapses, Austrian aeronautical engineers and designers from the first jet aircraft production plant in the world are hunted by Allies and Soviets for their super weapon inventiveness. Operation Paperclip brought Helmut, just as it did Von Braun to West Texas. Soviet agents hunting him had to be killed in the end to secure Helmut and his family. Events are true!