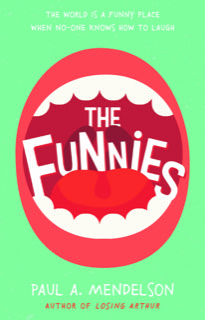 A 12-year old boy, who lives in an Orwellian state that deprives its citizens of their sense of humor at birth, to keep them compliant, has somehow evaded the 'zappers'. He finally has to flee to the forest where he's captured by The Funnies - a bunch of subversives determined to keep humor alive .

A young boy flees into the forest, away from the authorities of an unnamed state who are trying to deprive him, as they have all their citizens, of his sense of humor.(He has managed to keep this under wraps until now, but humor will out!) But he is captured by manic outlaws called The Funnies.


12-year old Marius has discovered that humor-removal can in fact be reversed. He and The Funnies use this knowledge to trick the powers who are in charge of ensuring their entire country is humorless (and thereby malleable and subservient) to roar with laughter. Fun is restored to the country.

I believe this has a sufficiently compelling plot, with a host of appealing characters, both child and adult, to be a great family movie. With a possible spin-off into a continuing TV series. (I am also a BAFTA-nominated comedy writer and screenwriter) It is both exciting and very funny, and would appeal to kids as a terrific adventure with characters they'd love and with whom they could identify. Yet for adults and thoughtful young people it has a more Orwellian message, as an allegory about totalitarianism and the suppression of the individual. (Think North Korea) Reviewers of the book and readers in UK and US have all found it very funny and exciting, but also that it made them think about the value of humor in our lives and the Orwellian dangers of its suppression. As a celebration of humor, the casting of fine comic actors could make this really stand out from the crowd.

I am the BAFTA-nominated creator of several long-running BBC TV comedy series, shown all over the world, as well as a TV and radio dramatist and multi-optioned screenwriter. I am the author of four acclaimed novels, the first of which was bought - along with my script - by LA producer Elizabeth Fowler - and a book of short fiction. (I have scripted three of the novels and two of the stories).