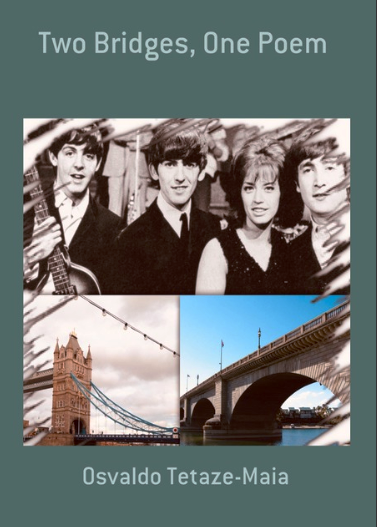 The story involves a business man and his Real Estate Agent, when they discover that the city of London would auctioned the famous London Bridge, so, they planned to win the auction and install it in Arizona, regardless all obstacle that they was about to face in this unthinkable journey.


The story ends ten years later with a total success of the unthinkable purchase of the London Bridge that created one of the biggest tourist sites in the USA, and revealed a hidden passion of one character with one of the Beatles.

I see this story as a film with scenes of comedy and drama that describes the true story of the purchase and sale of the London Bridge, as well as all the true historical episodes of World War II, however, it was adapted with a pretense novel to give life to the other characters. Still today, anybody else who is not a Londoner, when thinking in the London Bridge, imagine the famous bridge with the two towers, but it isn’t, that’s the Tower Bridge, and this simple misunderstood fact made an entrepreneur in the 1960’s undertake a tremendous journey to promote his real estate development in the middle of the desert of Arizona, purchasing the London Bridge, dismantle it and transport it by cargo ship and trucks to the site of his development. Across the ocean the two protagonists find themselves involved in a complete different atmosphere, and they had to work together to dissimulate their mistake when they arrived in London to buy the London Bridge. Robert McCulloch, Barbra McCulloch, Robert Plummer, Ivan Luckin, Gilbert Inglefield, Peter Studd, are real characters, the rest is work of fiction, created by the author. The establishments and cities described in the episodes are real. The whole story has innumerous historical facts that will be narrated to the viewer through the characters, some real and some fictitious, but involved with the real person brought to the story. It’s a novelty even nowadays and that’s why this story is so captivating for all ages.

Lawyer, amateur tennis player, 'compulsive' traveler; Osvaldo Carlos Pereira Maia is my first name and the “nickname TETAZE” came from childhood, and according to my Mother, my younger brother called me that and the nickname stuck, and today I incorporated it as a ‘pseudonym’ in my writings; I was born in Porto Alegres, RS, I lived in Curitiba from 10 to 25 years old; In the USA I lived for a year in 1985 and spent several seasons of two to three months between the 1980s and 2000s; I have also lived seasons in Argentina and Spain, always on business and tourism; I have lived in Santa Catarina for 35 years, in Balneário Camboriú; I am 65 years old, I am married, a lawyer for 30 years, practicing in the civil, international law and foreign trade fields, as well as working as a translator and interpreter of English and Spanish languages ​​in the judicial districts of my region; oh, and in my spare time I write my chronicles and memories, and ‘hit a tennis’ on the courts of my Clube Itamirim in the city of Itajaí, SC.