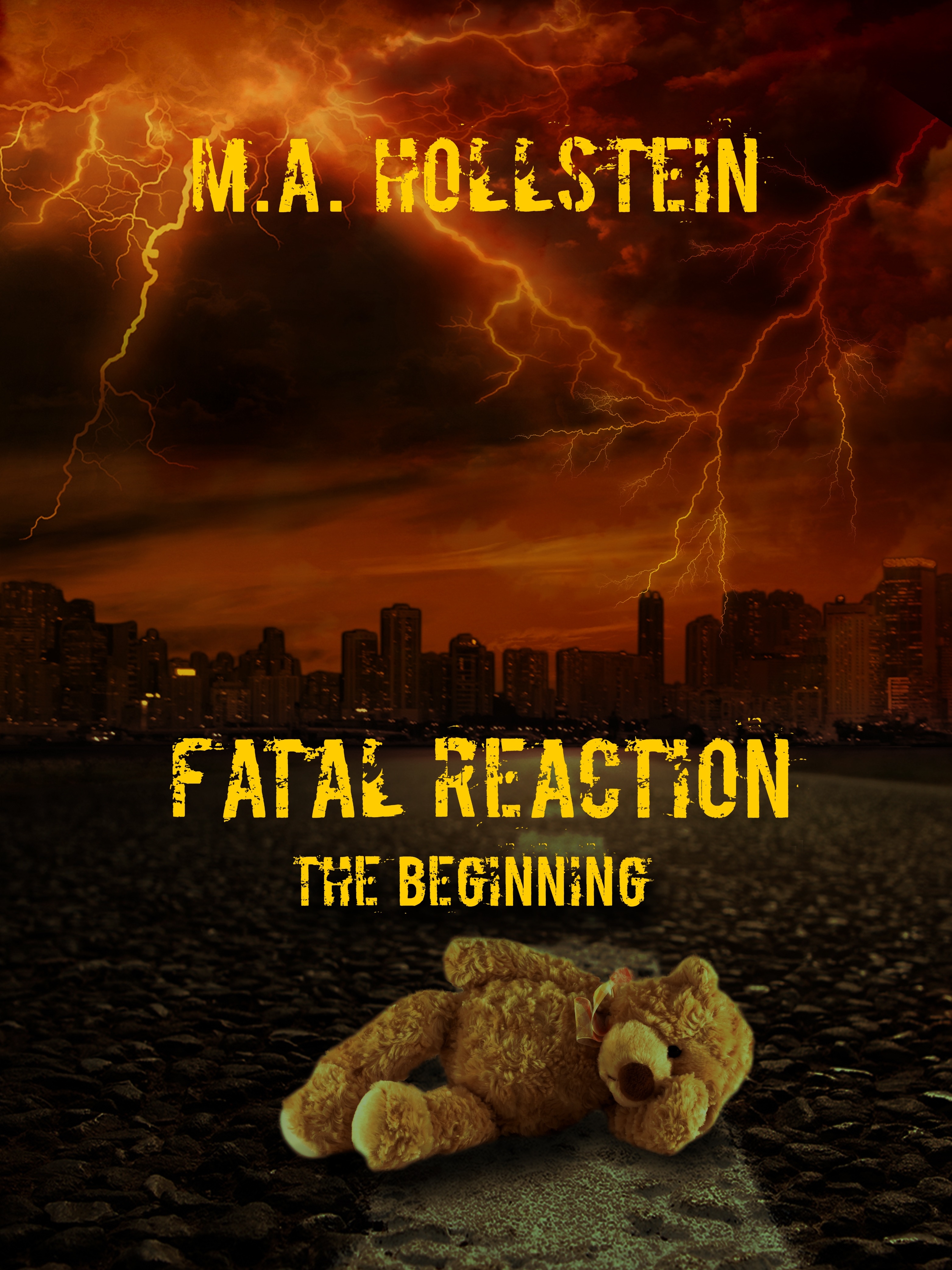 An virus is spreading throughout the world causing people to become violent and attack one another. The series follows several main characters as they do what they need to survive.

Ellie is driving home to Oceanside after spending a weekend in Las Vegas. She cuts through the desert taking back streets when she stops for gas. A young woman who appears to be having an allergic reaction enters the gas station store and violently attacks the man working there, killing him.


The lights flicker and the electricity comes on after being out for over a week. Ellie's dog runs out the front door growling and barking. Ellie chases after him and stops to look upwards. A spacecraft is hovering in the sky blocking out the sun. She now knows that this is just the beginning.

Fatal Reaction is a suspense horror series with a sci-fi twist. Characters from different backgrounds come together to help each other as they learn to survive not only a virus but an alien threat. The audience follows the characters that behave like real, everyday people as they battle the unknown and forge new relationships. The characters in the story are relatable to the audience. They're not superheroes with superpowers, but ordinary people trying to survive. They're your grocery store workers, teachers, electricians, police officers, office workers. They're parents, grandparents, and children. Their families are being torn apart by this fast-spreading illness that is causing mayhem and destruction all over the world. Several groups of characters are followed throughout the series as they learn more about the virus and the aliens. Eventually, the different groups of survivors find each other and pull together to conquer the alien threat with the help of a good alien race, who are also in danger of extinction, saving humanity. Fatal Reaction has the ability to be adapted either as a television series or a movie series.

M.A. Hollstein resides in Southern California with her two wonderful children and her spoiled kitties. Under the name, Michelle Ann Hollstein, she’s the author of the paranormal mystery series A Vienna Rossi Paranormal Mystery, the quirky and comical Aggie Underhill Mysteries, the Fantasy Trilogy, The Niburu Chronicles, and the new nonfiction series, Who Says You Can’t Paint? You can visit her website at www.MichelleHollstein.com to learn more about her books and to view book trailers.

A mysterious virus breaks out all over the world causing severe illnesses. The infected begin attacking and killing innocent people. Ellie, Amanda and Bill all find themselves fighting to survive, meeting up when the stumble on a hospital. They are contacted by an alien species that confesses to having infected Earth and their rough group decides to help humans from becoming extinct.

The story begins with an exciting encounters with the main characters learning about the outbreak. Ellie is stops to get gas and the attendant is attacked by an infected person. Amanda is taking care of her sick boyfriend and gets caught at a hospital when all the sick turn. The dire circumstances are present from the beginning, setting the tone of the story and creating suspense.

The story feels redundant towards the end. The characters continue to have near death encounters with the infected. The point when the characters begin to meet up could happen sooner as well as when they meet the non human allies. Some parts feel dragged out when a resolution to the story could be tied up by the end.

The hook is that a deadly virus is turning the global population into zombies and a rag tag group of survivors is contacted by the alien species responsible to give aid. I would watch this movie for the sci fi elements including the cross between zombies and aliens. This story also alludes to a cure which isn't common with zombie type stories.

This could have a large fanbase as stories surrounding the ideology of zombies are still very popular. The lead characters are mostly woman and it comes from a civilian perspective instead the government trying to find a way to stop the virus.

This does not have some awards potential for cinematography. The post apocalyptic world can be unique with many iterations possible. Amanda's first encounter with a infected person is in the barren desert where she comes across an old gas station. There is room for amazing shots of the landscape and then barren cities as the story progresses.

The story is not very unique. There is a global outbreak of a virus that turns humans into something resembling zombies. Most are infected but a few survives. This is the basis for all zombie stories. The unique element is that another species from a distant planet are responsible for bringing the virus to Earth. It is a mild inconvenience for them but is devastating to humans. The main characters are female which is unique as well.

The lead characters stand out because they are women in a science fiction/action story. There are male characters as well but not as featured. The woman survive well on there own until the characters begin to link up. The woman aren't overly qualified for the situation but are relatable, strong female characters.

This is not a rare gem but a well written story that is entertaining. It presents some unique elements but are not explored as this story highlights the start of the outbreak. I assume it explores the revelation of the alien species that is responsible for the virus in a sequel. That would set the story apart from others in the zombie genre.

This is a consider because it is an entertaining story filled with suspense, gore and action. This is a true science fiction story with aliens and zombies with many heartfelt, human moments that enrich the storyline. It introduces some interesting plot twist with another alien species being responsible for the outbreak. Visually, there would many great post apocalyptic scenes that could be exceptional.