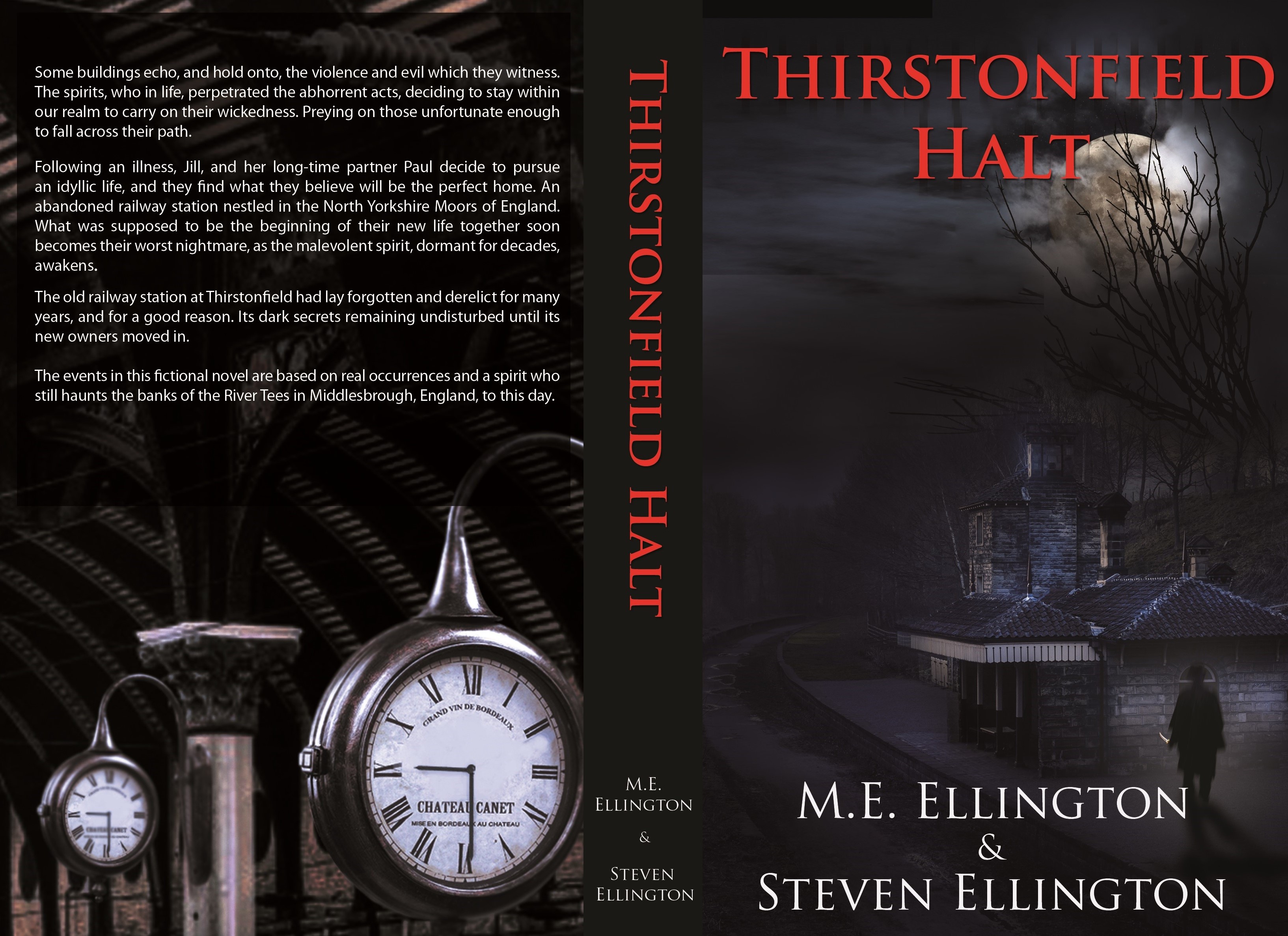 After moving into their new home – Thirstonfield Halt- a formally disused and derelict rural railway station, Jill and her fiancée Paul begin to encounter strange and unsettling events.When Jill begins to investigate the Halt’s past, she uncovers the family secrets of the previous owners.

Thirstonfield Halt is a supernatural thriller spanning two-time lines, and lives. The main protagonist of this story, Jack Bright, is first introduced to us as he commits another murder and flees the scene. We then follow him through through World War Two, and eventually to his death, and beyond.


The story ends on two open beats which will lead onto a prequel and sequel. Jack is exorcised from the Halt, but not before revealing another revelation about its past. Jill & Paul abandon the Halt believing that to be the end of their problems.

M.E. ELLINGTON BIO Martyn Ellington (Pen name M.E. Ellington) is the author of two published novels, and the author of two Amazon best-selling titles. In addition to these titles, Martyn has also written movie reviews for the online anti-newspaper, Dafty News. As well as Tomorrow’s Flight, a project which is the final stages, and recently became a finalist in the Book Pipeline competition, his published and current projects include: The Martialis Incident—a novel: (Science-Fiction/ Thriller) Three NASA scientists, and a British reporter, stumble upon a conspiracy which goes to the top of the U.S. government. As the first manned flight to Mars begins, they discover that the propulsion system was rushed through its development and not fully tested. During launch it damages the earth’s magnetosphere beyond its capacity to repair. following an unprecedented solar storm, a tear forms in the earth’s atmosphere. Now the rush is on to prevent the death of all life on earth, and of the planet itself. Devolution of a Species—a novel: (Climate-Fiction) Planet Earth fights back against mankind’s rampant abuse of our planet, and the animals we share it with. Based on the Gaia Hypothesis, it tells of the earths retaliation against humankind. In order to save itself, and all other life, our DNA begins to change. All humans carry a small percentage of dormant Neanderthal DNA, and using our own pollution against us, the earth resurrects this dormant strand. As our species begins to de-evolve, the World Health Organisation scientists, led by Joceline Mercier, must uncover what is happening, and if it can be stopped. Thirstonfield Halt—a novel: (Supernatural Thriller) A young couple buy an abandoned train station on the North Yorkshire Moors of England only to find that it’s inhabited by a malevolent spirit. As Jill, the main character, begins to research the truth, a family secret is unearthed throwing everything she believed in, in to turmoil. Told from both the spirit’s POV (While alive and dead) and the living POV, and co-written with a professional spiritualist Medium, and is based on true events he has witnessed first-hand. This is a collaboration between, M.E. Ellington, and his older brother, Steven Ellington, a professional spiritualist medium. Though this is a fictional tale, the character of Jack Bright is based on a spirit Steven encountered in the Newport area of Middlesbrough, North East England, and the events described are based on actual events Steven has witnessed during his time working as a medium. You can see Martyn’s social media pages here: YouTube: TheBritAuthor Twitter: @MartynEllington Website: www.martynellington.com Instagram: meellington67 Facebook: facebook.com/BritAuthor www.thirstonfieldhalt.com www.stevenellington.co.uk