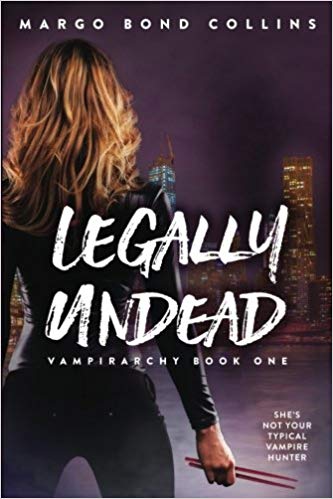 A reluctant vampire hunter stalks New York City as only a scorned bride can. When Elle Dupree's lawyer fiance becomes a real bloodsucking fiend, the bride-to-be joins a makeshift vampire-hunting team determined to rid the city of vampires in this action-packed urban fantasy.

Graduate student Elle Dupree has her life figured out: a wedding, a PhD, swank faculty parties. Until she walks in on a vampire draining the blood from her fiancé Greg. She screams and runs—not away from the vampire, but toward it, brandishing a wooden letter opener. Then Greg's body disappears.


Having killed Greg's vampire mentor, Elle thinks she and the team can focus on hunting Greg. But he retaliates by turning Elle's mentor Nick into a vampire. Elle is left to take over the vampire-hunting team, knowing she'll now have to hunt and kill not one, but two men she loved.

A reluctant vampire hunter stalks New York City as only a scorned bride can in this action-packed urban fantasy that will appeal to fans of horror and vampire films and films featuring women who become badass warriors. Comparable films & series: Underworld, Buffy the Vampire Slayer, Terminator 2. New York bride-to-be and graduate student Elle Dupree’s life falls apart when she walks in on a vampire draining the blood from her fiancé Greg. Horrified, she screams and runs—not away from the vampire, but toward it, brandishing a wooden letter opener. As she slams the improvised stake into the vampire’s heart, a team of black-clad men bursts into the apartment. Turning to face them, Elle discovers that Greg’s body is gone—he’s been turned into a vampire. When she’s attacked on campus soon thereafter, Elle is forced to admit she needs to join the vampire hunters to track down Vampire-Greg—especially once Greg figures out that she has a new love interest, Malcolm, and kidnaps him. Elle and the leader of the vampire hunters, Nick, must work together to save Malcolm from Greg and his seductive vampire leader, Deirdre, who has long-term plans for Greg. In a blood-soaked scene, Elle decapitates Deirdre. The team assumes the leaderless vampires must regroup—but Greg retaliates by turning Nick into a vampire. In the end, Elle joins the team permanently, planning to hunt down both Greg and Nick, completing this story but also leaving room for a sequel.

USA Today, Wall Street Journal, and New York Times bestselling author Margo Bond Collins is a former college English professor who, tired of explaining the difference between "hanged" and "hung," turned to writing romance novels instead. (Sometimes her heroines kill monsters, too.) You can learn more about her at www.MargoBondCollins.net