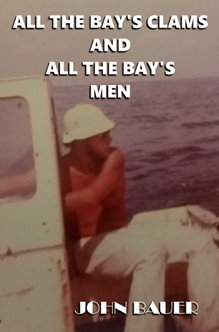 His best and worst days were those bay days, the ones that shaped his future.

Peter Halstead dreamt of a life full of political grandeur and solid achievements. He refuses to make his old man’s mistakes, nor will he dig clams forever. Moments in Peter’s young life soon steer him away from Clayport, his first love, and his buddies. He never returns to his halcyon bay days.


A forty-year high school reunion brings Peter back to encounter former classmates. He wants to showcase himself. Instead, he compares his life to theirs, re-discovering his own existence. A crumpled napkin channels him toward an uncharted destination. . . altering his remaining days on earth.

This is a unique, original story which lends itself to a low-budget, but meaningful drama. The movie's first part would be portrayed by hopeful, youthful baby boomers, recent high school graduates spending the summer of 1969 digging clams for money from their native Great South Bay. The bantering dialog between the boys will be highly entertaining, and there are a number of life-changing events for the protagonist, Peter Halstead. Think "American Graffiti" on small boats not hot rods, fast-forwarding to a forty-year class reunion. Serious drama with comedy mixed in. The reunion begins another brief, but event-filled journey for Peter as he compares his life to those of his former buddies. He makes choices, searching his soul. The reunion, his reflections, and subsequent actions lead to a bittersweet ending. Viewers should be moved by the story where a kid who worked to achieve the American Dream didn't quite get there.

John Bauer read, lived, worked, loved, won, and lost, well before he ever wrestled with words. In 2007, fired as county manager for no good reason from a place he’d previously managed for six productive years, he mistitled, and under-achieved with a textbook/cathartic memoir—boats, knots, other things. Undaunted, John sold health insurance and stocks and bonds, and then served five (5) twelve (12)-month tours in Iraq and Afghanistan as a Senior Governance Advisor for the US Department of State. Since 2013, Scribes Valley, Stone Canoe Literary Journal, AnotheRealm, the Magazine of Speculative Fiction, Andrews UK Limited (House of Erotica), WildSound Novel Writing Festival, and Stringybark Stories have published his scribblings. Thrice, he’s successfully participated in Nanowrimo. In November 2013, he drafted All the Bay’s Clams and All the Bay’s Men. Seven years and multiple re-writes later, this second novel was published on 22 AUG 2020. His genres are literary fiction, satire, drama, dark comedy, farcical, horror, erotic, and non-fiction. A believer in pre-destination and Divine Providence, John opines the endings to each of his manuscripts are not entirely his own. Born in Brooklyn, and raised on Long Island, New York, where he dug clams for eight summer seasons, John was schooled at Notre Dame and Syracuse, with detours to Mexico City, Mexico, Raleigh, NC, and Little Rock, Arkansas. Since 1979, he has worked as a public servant in southeastern North Carolina. There, he and his wife raised three children and currently have six grandchildren. Oldmanwrite—website and brand—reflects by any quantitative measure, John is old. Qualitatively? That part of his BIO has yet to be written.

Peter longs to fulfill his potential outside his small Long Island community. A summer job digging for clams gives him a lot to think about in what to do about the future. Peter decides to follow his ambition as far it is can take him. Yet a high school reunion forty years later makes Peter change his mind and pursue happiness instead of expectations.

The logline is too vague to be enticing. Comparing where Peter was versus where he ends up would be a better reflection of the logline or stating what lesson Peter learned. The short summer notes that Peter left behind his first love and this claim seems like a stretch. Shasta was more a random hookup so omitting this will focus the story to seem less like a romance because it is more about his friendships. The location Halcyon Bay is also a proper noun so should be capitalized.

The premise of a clam digger looking to live up to his potential in Long Island is a highly specific setting that makes the story seem hyper-realistic. Because it is so specific, the period piece feels more intimate. At the same time, the interest comes from the setting's unusual nature given most people don't live like they did.

It is unclear what the shift was in Peter's feelings about Wolfgang outside of his health crisis. Wolfgang wasn't the nicest after high school and continued to seem like the same non-evolved person years later so for Peter to abandon everything to be near him seems odd. It is also unclear why Jocelyn was worth marrying as their relationships seems strange and frigid.

The hook is that Peter spent decades following his dreams only to realize he never stopped to check if his dream was still what he really wanted out of life. He then makes big changes in order to find himself again outside of his work.

This could definitely have a large fanbase. The drama is solid with relatable themes for baby boomers and anyone taking inventory of their past choices and future options. The dialogue is fresh and the setting is engrossing.

This could have awards potential depending on if thematic focus and how much the adaptation focuses on the reunion rather than the flashback. This potential is due to the strong and semi-unique existential crisis themes of an older male which is catnip to Hollywood elite.

AMERICAN GRAFFITI, EVERYBODY WANTS SOME!!, THE BIG CHILL, MANCHESTER BY THE SEA

The originality of the story stems from Peter's discoveries about how he wasn't happy with his current life after make changes for success so he simply changes his life. By focusing less on Wolfie and other characters or the flashback story, the transformation will have more time to develop.

Peter is undeniably smart and ambitious but constantly doubts himself. He is also brave is following his heart outside of his obligations.

The setting and characters are delightful but there are some pacing issues in the beginning that cause the flashbacks to feel slower.

The setting is very engrossing and the characters are dynamic and likeable. The theme is strong and somewhat unique. There are some pacing issues where the beginning seems longer than the end.