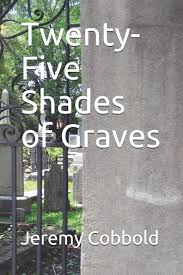 This a novel, told in the first person, about a man, disaffected with life and work, who enjoys walking around graveyards wand who hates all forms of authority. Various factors collide to create a perfect storm, propelling him to perpetrate an act of revenge for all the years of pent-up hurt.

Christopher Jones is sitting in his favourite place, the local cemetery, talking directly to the reader about his favourite topic of conversation: cemeteries. This is the springboard from which we then learn more about his past, which informs his worldview, which takes the story forward.


Things do not go according to plan. Christopher's hatred of his employer, combined with his love of practical jokes will prove his undoing.

This is a story about a man, to whom most readers will be able to relate. He hates his job, he hates all forms of authority he has ever encountered, but, unlike most people, encouraged and egged on by another, he resolves to do something about it. I think it will appeal to people because the central character is refreshingly open and honest. The settings are also very evocative. The book has not sold many copies, but has received very good reviews, eg mopcrop wrote: 'Found this an engaging read, finished in two sittings which is unusual for me with regards to fiction. Very, very dark, sad and funny at the same time. If you are a fan of Inside Number 9, like me, you may just enjoy this. Hope to see more from this author in the future.' Someone else also said that they 'loved the book' and that 'anyone interested in psychology would love the book', although that wasn't my intention when I wrote it. Interestingly, enough, this second person also advised that the book was potentially dangerous and should not be read by impressionable people. It's told in the first person because I wanted to create a sense of immediacy, of putting the reader in direct touch with the central character. I think it would make a brilliant film or TV series, but that is only my opinion. I can only advise you to read the book. You won't be disappointed. It's unlike any book ever written before. If adapted for film or TV, it would, I am sure, gain a cult following. .