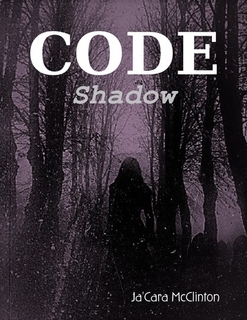 Revenge is all she wants in this life. A vendetta against the man who caused her fathers death. Kat Long who has amazing electrical powers works for an organization called the S.S.O with her dark wing partner. As her greatest enemy returns, her revenge plan is put into motion.

Kat Long is doing her normal check in at her job the Supernatural Spy Organization. Several flashes go off on her watch, she taps it and see its a code red. She dashes off in a hurry to her mother who is in danger, thinking she can not lose her like she lost her father. Kat runs, will she make it?


Kat's senior prom will never be described as normal. After nearly risking her life to defeat her greatest and most powerful enemy, she has now put him to rest and her revenge has been fulfilled. She has gained a new perceptive on life and as she continues to grow,her father can now rest in peace.

When I see Code Shadow, I see a book that has action, comedy, and adventure. It gives the mind something to picture when read. It is like the old animated series Totally Spies except with rated-R action involving the supernatural world and a duo team who cannot stand each other but secretly love each other too. Here in Colorado Springs, Colorado in the year 2040, a young woman is working hard to protect her state and the world from harm. Kat Long a hybrid who is part ghost part human. Striving to do her best in making sure the human world is protected at all times. Even though this can be rough, juggling high school and her spy job, she knows the effort is worth it. And though she may have an airhead partner who can't stop drooling over her, she knows that no matter the headaches their teamwork is always golden. As her senior year of high school begins, an old enemy to her deceased father organization emerges. This one enemy has the power to threaten all of mankind and it is up to her and her dark angel partner to stop him. While doing so, Kat's true purpose in life and this organization is revealed. Thus, will her status as a spy hero be put to the test or will her revenge bring out her true self as her identify is rediscovered? Follow Kat Long through this adventure filled with action, monsters, self-discovery and a crazy vendetta for revenge as her story is told in the name of Code:Shadow.

A young woman whose passion for writing warms the heart of readers. Ja'Cara writes to not only warm the heart but excite the mind too. Each novel she has written is filled with major action, adventure, comedy and romance. She explores the world of science fiction while also tying it together with supernatural charm. Ja'Cara may not be perfect but her writing fills the readers mind with vivid images of adventure and romance.