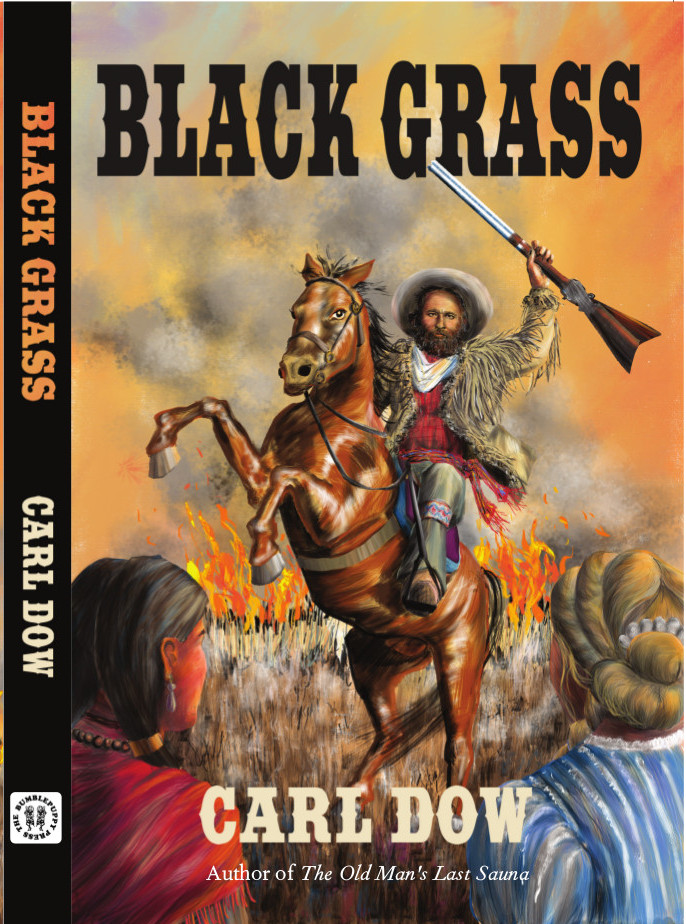 In 1866, Gabriel Dumont's Metis forge an uneasy alliance with Chief Sitting Bull's Sioux, while Susannah Ross adapts to life as a nomad. Black Grass is an epic tale that builds to a thrilling climax as the outnumbered indigenous allies defend their homeland against a vastly superior enemy.

The widow Susannah Ross, on the run from Halifax, is ridden to ground by 2 bounty hunters and a Fenian scout halfway between Saint Paul, Minnesota, and Fort Gary, Manitoba. Her horse broken, Susannah faces gang rape and a life as a bond-slave, but Gabriel Dumont sees the attack and must intervene!


Dumont leads a creative guerrilla-style defence against the invaders, including the sinking of an inland navy of paddle-wheelers and a deliberately-set prairie fire. On the domestic front, Dumont's wife absconds with the baby Susannah bore to Dumont.

At heart, Black Grass is a story of good versus evil, a western featuring outnumbered and out-gunned heroes - the nomadic Metis hunters in uneasy alliance with Chief Sitting Bull's Sioux - and dangerous villains. Our viewpoint character is the city woman Susannah Ross, who must learn to live among the nomadic, hunter-gatherer Metis - who are, nevertheless, a sophisticated people in their own way. Susannah's arc is both a coming-of-age, and a fish-out-water, story, set in a time of crisis. That crisis is war, an invasion of what will become part of Canada by an army of Fenians made up largely of veterans of the American Civil War. The story's climax - the battle between our outnumbered heroes and the invaders - takes place both on the open prairie, and on the Red River, as the Fenians come north by land and by water, supremely confident they will have little trouble from a few hundred buffalo hunters and their indigenous allies. On the personal front, the love story between Dumont and Susannah, and between Dumont and his wife, Magdalene, is a complex triangle that nevertheless treats all three protagonists with affection, respect, and no small amount of humour. Introduced as a damsel-in-distress, Susannah quickly learns - and masters - the ways of the prairies and soon begins to forge her own path, despite her passionate love for Dumont.

Carl Dow has been a journalist with such publications as The Globe and Mail, The Toronto Telegram and the Montreal Star, and was nominated for a National Newspaper Award. While writing for national magazines, Alan Walker, then managing editor of The Canadian, said he was one of the top ten writers in the country. Carl Dow has edited tabloid and broadsheet dailies and weeklies, and monthly magazines, and has written for television and radio. As Youth Editor of The Montreal Star he was the first newspaper columnist in North America to praise The Beatles. Outside of journalism, he has worked in farming and new-housing construction, as a cost accountant and truck driver. His all-time favourite employment was the eight years he spent as a part-time school bus driver while writing what became The Old Man's Last Sauna, a collection of short stories. Black Grass is his first novel.