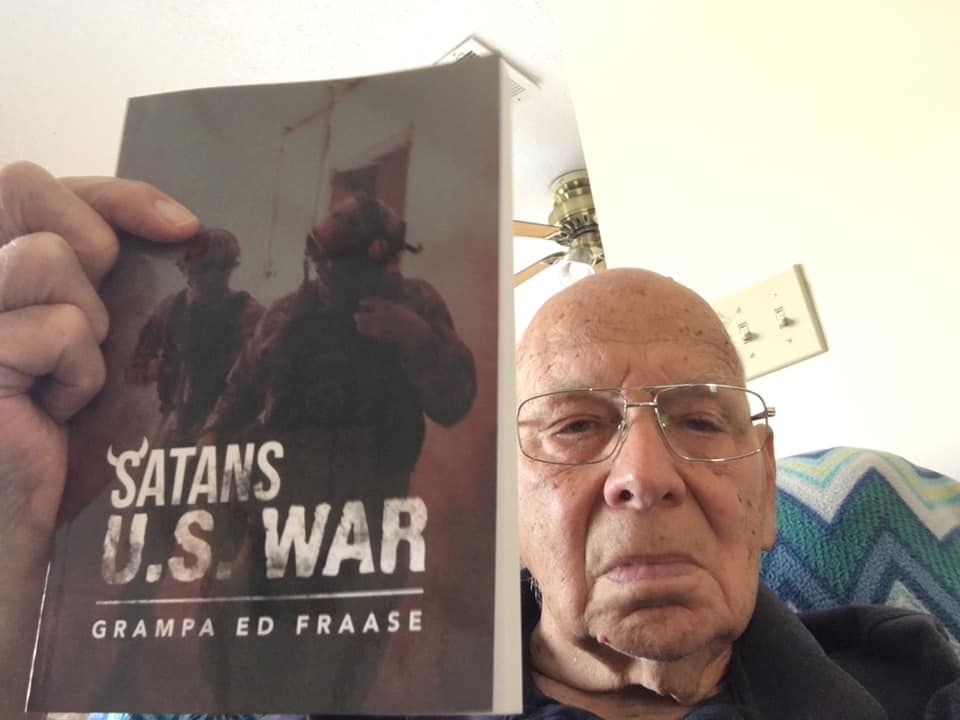 Satan starts a war with the US and these two p[people fight him the best they can and do very good work. God is well pleased with them and helps them somewhat. Both men fall in love with a women.

The war is just starting and two men are pulled into the army. This is their first meeting in the very small village of Alden Illinois. The story tells about what Satan does to go through Canada, then into the United States. Not just one direction but four different direction.


Two men and one very young man get married together with there wives, in one ceremony, and God has them do different items to restart the U.S. all over again

This story starts on Christmas eve as Satan's troops come down through Canada to attack the US during the holiday of Christman. Fancy equipment to carry the troops over snow, ice, water, very quiet and very fast. Satan has his people in high places so things keep moving. He does not like our country as we are God-believing people. Our two main characters, Mark and Peter, meet each other in their first battle against Satan, but they were completely overwhelmed by Satans troopers. Mark escapes where they were at and later finds Peter with his arm badly shot up. A woman came upon the area to help bandage and take care of other wounded soldiers. When she was just finishing she tells Mark if he needs her how to reach her, but he already has his plans and takes her in his arms and kisses her. But why did she kiss back, Mark will never forget that kiss, for she belongs to God and is an angel of his. The story then continues, with Peter finding a woman he falls for and how they both fight Satan with their special ways, using a BIgfoot, a Thunderbird, and a couple of other unknown creatures to Satan's troopers. Their is Angelica, Sue, old Doc, Patty, Paul, and his parents all working on the farm or staying there, until the wedding day, a three some wedding all together.

I have taught the Bible to many people. I am using references to the Bible throughout this fictional story. The author is an 85-year-old gentleman who has published eight other books, although you may not find some of them as the publisher that was being used just closed the doors and left. Many authors were stuck as he owns the manuscripts. I am a widower of 30 years, have three children, six grandchildren, and three great-grandchildren, and have moved just recently to DeWitt Iowa, so I can watch them grow up. I served in the US air force from 1952 to 1956 I have taught Sunday School to third graders, sixth graders, adults, and have also taught the Bible to small Bible classes in people's homes.

Satan and his forces start a war in the United States. Some try to fight against them but the U.S. is failing. Mark and Peter try to bring down Satan's troops where they can.

The story drew me in because it is set in the future.

This book is very black and white. It is Satan against God, good against evil. That can be uninteresting because there is no nuances. The story is formatted incorrectly and the grammar is juvenile, making it difficult to comprehend at times. There is little depth in the story. The world is battling against supernatural beings and that is not explored at all. The use of the word "oriental" to describe Asian people is not welcome. The women could have a bigger role in the action but there primary role is as love interest or home makers.

The hook is that Satan has infiltrated all forms of government around the world and activates them to start a war against the U.S. I would not watch this movie as is.

This could have a large fanbase with the Christian community. It is definitely geared towards them as it deals with Satan and God and quotes scriptures from the Bible.

This does not have awards potential. The grammar and dialogue do not facilitate character development or deepen the world building.

The story is original because it uses Christian dieties in a modern war. The ideology and technology hasn't changed in 600 years, however. The story doesn't represent the future.

The lead characters do not stand out. They are very 2 dimensional with their only objective being fighting Satan's troopers and women.

This is not a gem but could be reworked into a great story. The fight between the ultimate good and evil on a supernatural plane would translate well on screen. It needs to be palatable for a wider audience than it is. This will appeal to Christians and more left leaning ones.

This story has potential. The final battle between God and Satan after Satan takes over the U.S. could be interesting, especially because of the U.S. complex history with religion. The presentation that God and Satan are real would be an interesting topic to explore. And that the battle is playing out with mankind would work well on screen. There needs to be more open minded characters. There were some degrading labels used and some disparaging comments about immigrants. The story is set in 2666 and the world would have changed in ideology.