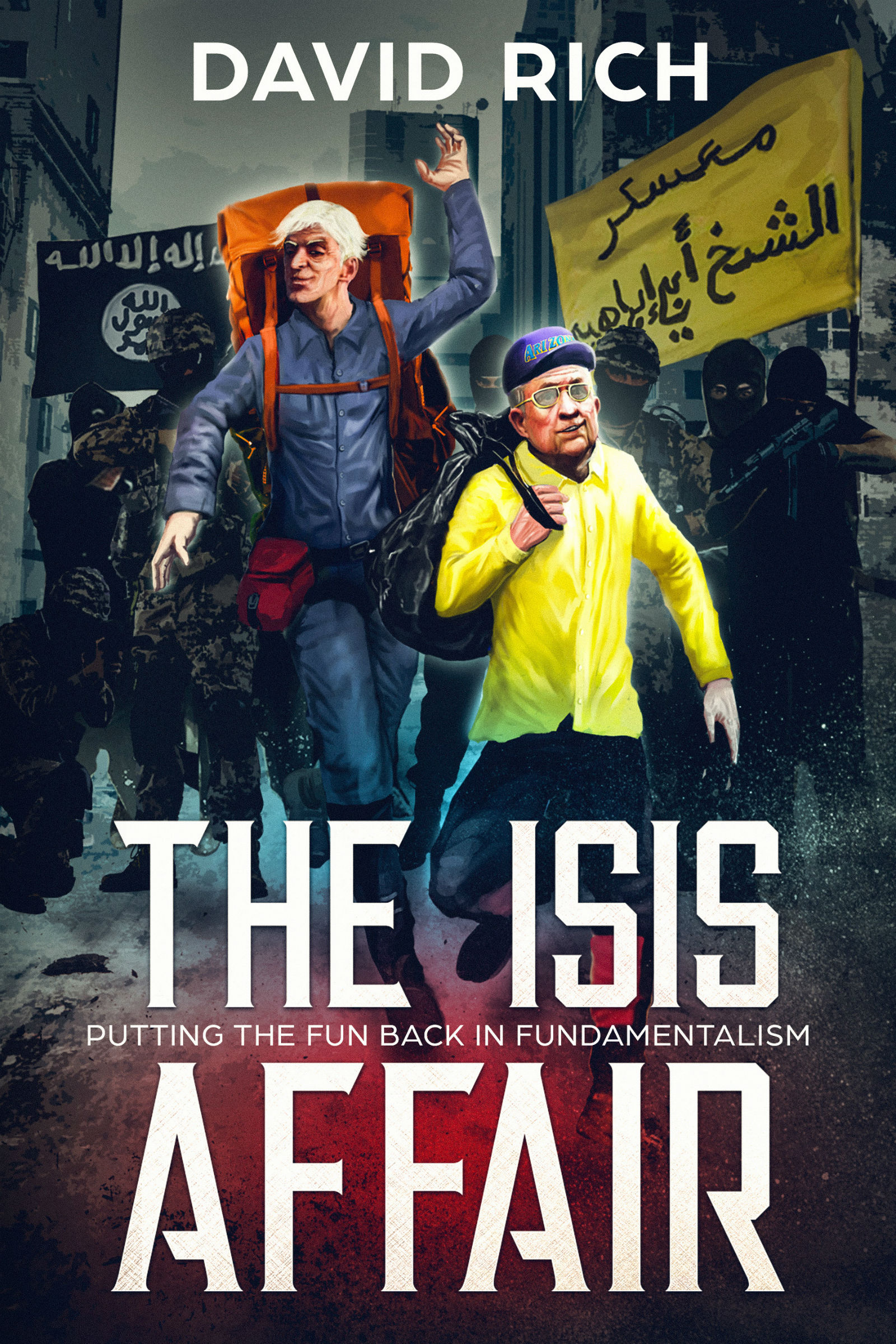 The ISIS Affair is a wicked comedy featuring a few of the worlds' over 4000 religions as their infallibility collides in Syria. Two crotchety old curmudgeons, in the satirical tradition of Gulliver's Travels, outwit ISIS and themselves at every turn, putting the fun back in fundamentalism.

Two ancient backpackers, Brit Doug and American Ralph, board a van for Aleppo where Ralph is writing an article on the bombing of the Aleppo Museum. The van is full of of ISIS recruits including Marcy, an American law grad, recruited by the Caliph, to run the Raqqa women's prison.


Doug and Ralph disarm a doddering guard at Marcy's women's prison in Raqqa, racing to the local airport, with Marcy in hot pursuit, where Ralph flies a Piper airplane to escape with a priceless Ram in a Thicket from the Aleppo museum, two ISIS defectors, and the Yazidi Joan of Arc.

Two ancient curmudgeons board a van filled with ISIS recruits to Aleppo, where Ralph, an American writer and religious expert is writing an article on the bombing of the Aleppo museum. Atheist Doug makes fast enemies with Marcy, an American law grad recruited by the Caliph to run the women's prison in Raqqa. They escape the ISIS invasion of Aleppo while carrying the priceless Rams in a Thicket on a motorbike, but are soon captured by ISIS in Dabiq. They escape to the Turkish border and try rescuing Narin, the Yazidi Joan of Arc, but capsize a hobey cat on the Euphrates and are recaptured by ISIS. Ralph, Doug, and Narin are thrown in Marcy's prison where she plans their public crucifixion. Ralph and Doug outsmart the Caliph's father and escape the prison with Marcy in hot pursuit. Ralph pilots an overweight Piper 4-seater with the surviving Ram in a Thicket on Doug's lap, two ISIS defectors, and Narin, learning that religions are less than the epitome of morality.

[none] David Rich grew up on a ranch in Colorado. His dad introduced him to tractors and cattle, and his mother to music and travel. He toured the country with an amazing group of fellow misfits in the fighting 529th Air Force Band, attended the University of Colorado in Boulder and the University of Chicago Law School, and by some fluke began practicing law in Phoenix with Lewis and Roca, the firm that handled the Miranda case (which he had nothing to do with). David tried private practice but found the cushy job of assistant attorney general more to his liking. (His appointment as judge pro tem by the Maricopa County Superior Court was a resounding success because attorneys immediately settled any case to which he was assigned.) He and his third wife decided they’d rather travel than work, so they saved every penny on a ten-year plan that took eleven years. Since retiring in his forties to become a full-time traveler, David has lived in almost every country on the planet. He has written dozens of travel stories for publications ranging from International Living to GoNOMAD.com. In Myths of the Tribe (1993), he examined the influence of organized religion on ethics, government, and economics, second edition August 2019. RV the World, now in its second edition, combines his seventeen-year tour of 170 countries with lots of practical advice. David also wrote The ISIS Affair, a satire on religion and nationalism in Syria. In 2019 he published Myths of the Tribe, 2nd ed and Scribes of the Tribe. All books are available on Amazon and wherever books are sold online. His latest book, Antelopes, a modern day Gulliver’s Travels, will be published in 2020.

Two rather senior American men engage in a heist of a very valuable middle east artifact. Along the way they manage to anger an important ISIS leader and and the chase is on. Hijinks ensue.

The dialogue seems on the nose at times,and the lead characters age doesn’t always work in their favor. The main problem, however, are xenophobic and racist undertones to the story. Something to watch in today’s climate.

The pace draws you in quickly.

The dialogue seems on the nose at times,and the lead characters age doesn’t always work in their favor. The main problem, however, are xenophobic and racist undertones to the story. Something to watch in today’s climate.

It is a madcap adventure a la "It's a Mad, Mad World" with two "fish out-of-water" adventurers.

As a comedy, some people who are drawn to humor in any form may go see it but I don't see this having a true broad appeal.

No. This goes for quick aughs. It's not an "awards type" film.

IT'S A MAD, MAD WORLD. ISHTAR. RAIDERS OF THE LOST ARK

What's original is the age of it's main characters - both senior citizens.

Their age makes the main characters stand out, and how it plays against the current world.

This is a better than average story in terms of plot. It could be molded into something compelling for adaptation if it is pared down and its language is scrubbed to be a bit more PC at times.

The world is there, the characters are there, the only thing that is needed really is more attention to tone to weave everything together. That would help the author in determining how to effectively convey the goals and motivations for the characters and figuring out how to handle the exposition for the complex world they operate in.