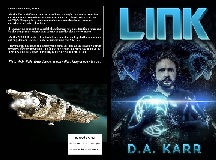 A devoted military captain and his hand-picked team of specialists hunt his nemesis, a terrorist with an appetite for blood, across time and space in the hopes of stopping him.

In the year 2799, Earth has suffered a major catastrophe after a meteor crashes in Europe, which resulted in all of the continents either turning into small islands or merging into larger landmasses primarily comprised of desert or ice.


After the Phoenix and Captain Garrick hunts down Menser, Captain Garrick's crew gets badly injured where they are turned into androids. Garrick finds Menser and kills him, then Garrick's android crew takes over the N.S.T.E.A.

“Red Crater City” Logline: In the far future, A tough gun-slinging female starship Captain uncovers a sinister plot to give time jumping technology to her nemesis, a fearless bloodthirsty outlaw. They must steal back the tech at all costs even if it means their lives. In the future, the Earth is hit by a massive meteor the size of a small planet, splitting the continents apart. Only smaller landmasses comprised of desert and ice is left, forcing the remains of civilization to live in desolation. A notorious criminal, Afanas Menser, has other ideas of survival, as he becomes a sworn enemy of the Space-Time Enforcement Agency, namely Captain Jana Garrick and Captain Orius Becker of the starship Phoenix. A year later, Captain Jana Garrick is overseeing the construction of an S.T.E.A. military base, Ferris-1, in new Antarctica, when Menser attacks, hoping to get his hands on Phoenix. Jana’s forces fend off the attackers. Returning to San Francisco Prime, the crew regroups and starts to revamp its fleet. Little do they suspect that Menser has other ideas to take over the entire timeline. Captain Becker is contacted by Prime Minister Watkins, who divulges Menser has the time-jumping technology. Jana assembles the old crew from Ferris-1, to search for the ship. Reaching the ship, they encounter, Menser, and is ultimately severely injured in a warp accident. Becker sanctions a new mission to go after Menser and stop the S.T.E.A’s plan once and for all.

"LINK" was rewritten into the female version "Red Crater CIty". With over a decade’s experience writing books and screenplays, D.A. Karr’s ‘Red Crater City’ blends a ‘Mad Max of Fury Road’ with ‘Battlestar Galactic’ style, exploring what it really means to be human. Captain Jana Garrick is the woman of the hour (and possibly the millennium), an ever-brave maverick who uncovers time jumping as the only hope of humanity surviving the work of an equally-fearless outlaw. Prepare yourself to become embroiled in a war of survival and time, in a bold adventure sure to impress sci-fi fans. While post-Apocalyptic stories have become something of a literary staple, readers and critics are currently crying out for wholly-unique new narratives that don’t succumb to recycling of the ‘same-old’ concepts. D.A. Karr has stepped up to plate with gusto inhaling those concepts in a new version.