CODE OF THE RUNNING CROSS 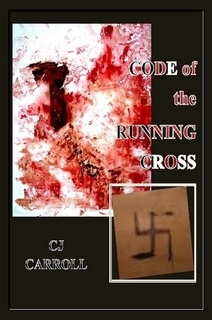 In 1922, a Bauhaus' French-Jewish artist's secretive action in Europe on the edge of war; in 2002, two transatlantic lovers, CLAUDIA KELLY, a New Mexico based travel and fine art nudes photographer, and FRANÇOIS ROSEN, high-end entertainment magazine publisher in Paris, France, caught up in a tangled web of Nazi confiscated art, are pursued by the ruthless, neo-Nazi, bad seed FERNANDO de la SEVILLA, German-Spanish grandson of a high ranking SS officer before WWII.

PROLOGUE (PART I...1927-33 something), could be a flashback): LOCALE: Geneva, Switzerland; the modernists painter, to become father of FRANÇOIS , is detained by SS officers, to whom major characters in the BODY (PART II & III – Denouement) are related.


FERNANDO, threatening to kill CLAUDIA & FRANÇOIS, is shot by the youth, CINCO, whom FERNANDO had tried to seduce into a neo-Nazii plot to bomb a local Jewish center, in Taos, NM, just one of many world – wide tragedies happening due to FERNANDO'S followers. DAVID has, having been stopped by a sheriff he knows, for speeding on the north road leading to CLAUDIA'S house, alerts others to the danger. Ultimately, Fernando, injured but alive, is apprehended, and with him, the plots and plans and players of his neo-Nazi global organization. In PART III (Denouement), CLAUDIA & FRANÇOIS, later that year, still investing the reasons FERNANDO wanted FRANCOIS' father's paintings, will find them, and in Geneva, will, with the help of SWISSBANK LORENSEN, and connections to those in the PROLOGUE, unlock the last clue, which will lead to their opening the bank account established in 1930-something, worth, in current time several million dollars. Back in Paris, FRANCOIS finally proposes, CLAUDIA closes the box containing the ring and shoves it in her pocket.... “There below us, lay Paris, the Paris of my dreams, the Paris I would leave soon, the Paris, like a powerful mistress, always separate me from the one man I'd ever really loved. ….'” You're still worrying love?” Francois asked. “About all that's happened?” ….I shrugged. “Just thinking how lucky we were, like your father, Ely, to have survived the mindless hatred that others did not. I can't help feeling, though, that a tsunami of viciousness, in some form, from some unsuspected corner of the globe, is yet to come.” ….Trembling suddenly....I reached into my pocket and touched the box containing the diamond ring, knowing I would leave it behind when I left Paris.....Francois reached for my hand. We walked down the funicular steps into streets that were waking, not beneath the shadow of a blood-red and black neo-Nazi swastika, but to the sounds of a free people beneath the bright colors of the free French flag.....Looking up, I saw the first pale, hopeful rays of dawn arc across a cloud-streaked sky. I felt homesick for Taos' sunrises and sunsets. Inhaling the aromas from flower markets and the boulangeries preparing for the day, I glanced in the window of a bakery about to open....”Love?” I said, “Cafe au lait and a hot croissant would be good.”

Primarily Taos, NM and Paris France, but this is a global story. Details of other locations (Berlin, London, Acapulco, etc.) are attached.