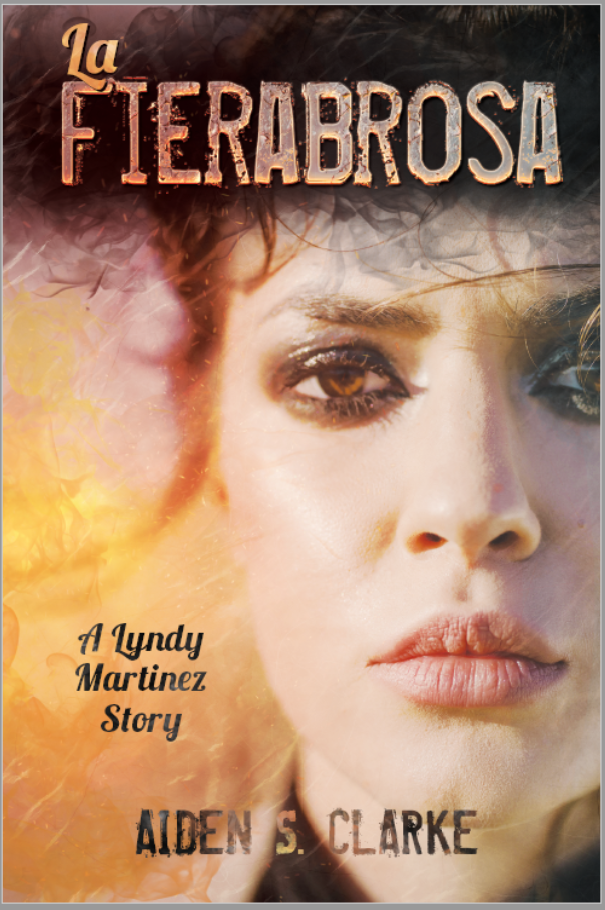 Lyndy is tasked by a bounty hunter to pursue a fugitive who vanished into the wilds of the Mojave. Along the way she crosses paths with a strange older woman, traveling alone. Lyndy faces outlaw bikers, cattle thieves, treacherous roads, a jealous ex-lover and competes for a date with a cowboy.

In the 1970s: Lyndy Martinez is bi-racial. On her 26th birthday she's tasked by a loan shark, also her boss Chan, to pursue a fugitive who disappeared into the desert. She's trying to focus on the manhunt, but struggles when she discovers a cowboy she has a secret crush on is trying to reach her.


Ending: A racist biker gang abducts her, chains her and takes her to a remote dry lake to kill her. She forces their truck to crash, unearths her pistol from the wreck and fights the gang. She chases down their leader with a rock and walks miles--chained-- until she's rescued by the mystery lady.

Lyndy Martinez is a young woman who straddles a cultural divide, her Latin upbringing and her newfound freedom in seventies Southern California. This ability to relate to people, plus creativity, have given her a talent for finding missing persons. Lyndy has broad appeal because she represents a powerful female protagonist who's assertive and proud, but also thoughtful and humorous. She's originally from East LA, growing up an orphan. She's earned the nickname The Spitfire due to her success. She may be young and stubborn, but she learns quickly from mistakes. Set against the backdrop of the US southwest, each self-contained story line features a romantic subplot, some good-natured comedy with either her boss or a friend, along with a smart and dangerous villain who is attempting to conceal themselves. I'd like to see this in a style or nod consistent with eighties action movies (but not cheesy). Kodachrome-like effect on the production would give it the attractive visual of an older film, but the shine of new film. So period muscle cars, clothing, good sharp dialog and a lot of outdoor shots (good bars too). I envision storyboards at the beginning of La-Fierabrosa, maybe in the title cards which given some back story and then it materializes into film with the vibrant colors of kodachrome. I understand there are a lot of lead characters like this, but not many I've seen are Hispanic. I've got literally a dozen stories in various states of polish. Please visit my blog.

As a teenager, Aiden S. Clarke was inspired to become a writer by a class trip to Wonder Valley. His greatest love became the Mojave National Preserve and the East Mojave Scenic Area. He also nurtured a strange affection for the crossroads town of Barstow. Since those early days he has been actively researching and working to preserve the history and culture of the desert. Aiden’s creative fiction is intended to be a humorous tribute to his muse, Barstow, and the rich environment that surrounds. Generally his cast of quirky characters inhabit the desert, and their adventures take place in the 1970s, a time of rapid evolution on the backroads of America.

Lyndy is a bounty hunter whose reputation has earned her the nickname “spitfire” (English translation). She takes on a contract from her boss to find a fugitive in the Mojave desert in an attempt to generate some much needed income. During her contract she takes on a side mission for a cowboy she has a crush on and also manages to get in the bad side of the fugitive’s family member who had connections to a biker gang. Lyndy ultimately sets a trap for the fugitive, completing her task and is saved in the desert by a woman after a final showdown with the biker gang.

The author’s writing style deftly draws you into the mind of the humorous, vulnerable, and slightly crazy mind of the protagonist Lyndy.

There was nothing in particular that warranted me considering putting the book down.

The protagonist is the draw. Lyndy is fun to read in every scene and compensates for a premise that seems a bit familiar.

I could see this potentially have a large fan base if audiences connect with the protagonist.

I don't see the adaptation of this story garnering awards/acclaim unless themes are explored in the future and this is connected to the protagonist in a profound way. Otherwise, I just see this as an entertaining story.

FILMS AND TELEVISION SHOWS SUCH AS ”BREAKING BAD”, ”SICARIO”, AND ”JESSICA JONES” COME TO MIND AS SIMILAR STORIES. THE FORMER TWO EXAMPLES SHARE THE SETTING/WORLD AND LATTER HAS A SIMILAR PROTAGONIST IN PERSONALITY AND OCCUPATION.

The protagonist is refreshing, however, the plot of the story can be spiced up to stand out more. While the protagonist is investigating the bounty the author could throw in some more red herrings and plot twists to keep the story fresh.

The protagonist stands out for her great combination of humor, vulnerability, and bounty skills to make for an intriguing character. The deputy is interesting for his complicated past with the protagonist and how he deals with it.

This story is not quite a rare gem, but it is an entertaining story that can be improved by a more thoughtful and introspective narrative concerning the protagonist’s past and how it ties to her present motivations.

The story features a magnetic and entertaining protagonist that has an occupation and background that is perfect for episodic storytelling. This is an action-driven story that audiences will primarily tune in for the protagonist but with improved an original storylines that explore her character and universal themes, has the potential to be a good show.