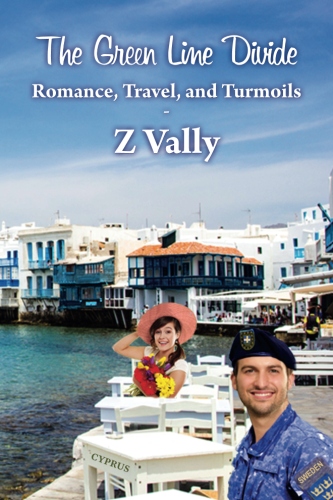 Part romance story, part travelogue, and part history book, The Green Line Divide is a charming and engaging book that should appeal to readers who enjoy a good coming-of-age story; a touching, hilarious, romantic journey of a United Nations Swedish officer with a feisty college girl in Mediterrane

On arrival in Cyprus, Alexis is being mistaken for a celebrity ‘Alexis T’ but she is found out, and quickly gets vacated out of a posh hotel. She is shaken but later giggles while on her way in a taxi to her student accommodation.


Alexis was a gamophobia sufferer. However, agrees to marry. Alexis’ bridal cart breaks down and she hitches a lift from her past odd encounter. Both depart to live in Sweden. At the airport, Grandma Cordelia’s secret is revealed. Grandpa Pierre is relieved that he was not the only one with secrets!

Greek islands of Cyprus and Rhodes Island in the Mediterranean.

Yes, there is a message. Hard work produces results. It can be accomplished if one is determined and strives for it. This is what Alexis does after she fails her exams. Sven too makes an effort towards his relationship with Alexis. Andreas is a mini version of Danny DeVito and Alexis is a mini version of Erin Brockovich. Sven is a bit reserved due to his respectable role as a United Nations officer. He is a bit like Richard Gere at home with Julia Roberts, in Pretty Woman. The employments would create the most amusements for the audience. An Italian diplomat who did not speak English forces Alexis to become an expert at miming. Dodgy George interviews Alexis in a car at night. He later is shown on the TV news as a rapist. A daft babysitter makes an appointment with Alexis, thinking Alexis was advertising as an employer! A German eco warrior is on a mental warpath with the chemical industries; singing Susan who was an animal and bird enthusiast sang at her feathered and furry friends. It has not all been all fun loving with this story. On Troodos Mountains, Sven came across his ex-girlfriend and this nearly broke off the relationship with Alexis. This story would work as a movie if made into a fast paced semi-musical, like Mama Mia or La La Land. Some real Island sights interwoven with romance, humour and turmoils would create a buzz. This is why it should be adapted for a movie. It will be a movie that will keep one wanting to find out “what and where travelling next to?"

In the 1980s, Z. Vally lived in Cyprus near the Green Line (buffer zone). She enjoyed living there. She travelled to Rhodes Island, Greece, on a cruise liner, Princess Marissa, which does not exist now. She now lives in the United Kingdom. She studied business and finance at a British college. Cyprus has been mentioned as it stands in reality. The boundaries have been laid down by the United Nations. For the purpose of clarity for reading: • Greek side or Greek-speaking side of Cyprus, in the south of Cyprus. • Turkish side, Turkish speaking, or Turkish occupied, in the north of Cyprus. The author has no political interest in Cyprus. She is neither Cypriot nor Turkish. The tales surrounding the buffer zone are fictitious, as are others. But some of the narratives are true, though. The towns, villages, sites and drinks are real.

Alexis Theodorou goes to Cyprus to complete an exam. She fails the exam and has to stay in Cyprus to retake it. This requires her to be creative in how to fund her studies. Eventually Alexis falls in love with a UN soldier named Sven, and they decide to get married and move to Sweden.

No, the book summary talks about how Alexis is mistaken as a popstar, that her grandparents have secrets and that she has commitment fears about marriage to her Swedish boyfriend. However, the ‘Alexis being mistaken as a popstar’ story is only a couple of pages rather than a subplot, her grandparents are not part of her adventures or even characters with dialogue until the end of the story. Also Alexis's relationship with the Swede does not come into the picture until late into the book and relationship commitment issues are not a source of conflict aside from a couple of sentences. By either adjusting the summary to better reflect the adventures that Alexis has and her purpose for living in Cyprus or changing themes within the story to further develop the ideas within the summary, the story and the summary will better match each other.

What is the draw into the story is not that Alexis was mistaken for one time as a pop star, but how she has to adapt to life when things do not go as planned. Because all of Alexis' plans rode on the one test and she fails the exam, her transformation while she is forced to wait to retake is interesting because the path she could take is unknown and unplanned.

The character motivations change rapidly with little segway and it can be confusing at time which goals those characters are trying to achieve. For example, Alexis is set on studying to retake her exams and then nothing is mentioned about school until the next time she takes the test. By not introducing themes or focusing on theme or plot points that don't bring about transformation in the characters, there will be more space to focus on the journey and define a purpose of the story. Or when themes are developed, making sure to fully develop the idea throughout the story rather than focusing on introducing many characters that leave no lasting impact due to their temporality.

The initial hook is that Alexis is mistaken for a famous Greek pop star when she arrives to go to university and visit her grandparents in Cyprus. The real hook is finding out how Alexis will support herself after unexpectedly failing her important exit exam to get certification for a job that requires a college degree.

This could have an indie film base that enjoys privileged coming-of age movies in exotic locations.

This does not have a lot of emotional range so its lack of drama would be unlikely to win acting awards as the characters are mostly happy.

The original location of Cyprus during Turkish dispute and a student having to figure out how to support herself on borrowed time in a semi-foreign country is original. By taking themes that are already laid out, such as cultural conflict and commitment issues, and integrating them into the characters' conflict throughout the story, readers will be better able to see the thematic development and uniqueness of the situation and setting.

What makes Alexis stand out is that she is self-made and assertive in a country that she did not grow up in. She is returning to her roots, but as an outsider and trying to secure an education in a language she is not fluent in, but she is still able to navigate love and find her own community of support to achieve her goals.

It can be improved that instead of following a disjointed travelogue format by developing themes and characters that recur throughout the stay in Cyprus then the story will have more emotional impact. When too many characters are introduced within too many situations it becomes confusing what the journey of the protagonist is, and when the goal has been completed.

Changing things like creating character arcs and themes developing throughout the story rather than episodically will create payoff at the end for all of the reveals and wedding. Because the character is not familiar beforehand with audiences, the format of a travelogue like teen movies in the travel genre struggles because it is hard to figure out the character's overall goal and thus get to know them through only their interactions.