My Man, My Boyz 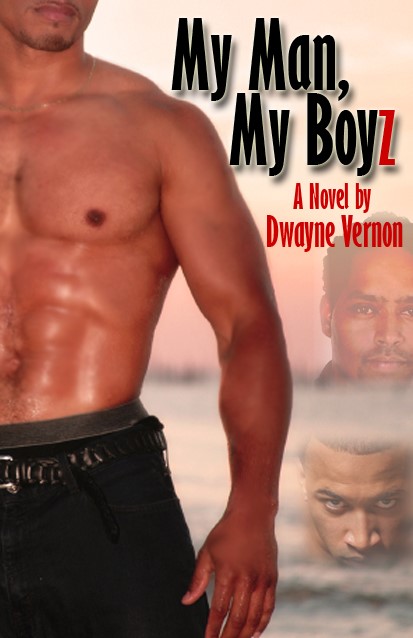 My Man, My Boyz is an intriguing story about men coming together as family. Their shared lifestyles and compassion for each other is the back drop for this fast pace drama filled with emotional moments and suspenseful plot twists. A group of black men and their biggest fear Homophobia.

James a black man is looked at as weak by a group of straight men and becomes a casualty of their ignorance.


The Character Chuck was part of the guys that killed James in the beginning of the novel falls in loves with one of James' best friends. Nobody knows the connection and in the end the connection is revealed.

Will Chuck's past destroy his relationship and have a major impact on the friendships shared by the close knit group. How far will Mike's career go once the secret is out about his sexuality and Will Reese's father ever be able to accept his son being gay especially after the death of his wife.

I am a author of 7 novels in the Washington, DC and Maryland area and 2 written movie scrips

Story of a group of homosexual friends who live their lives surrounded by fear of homophobia. Each one has a history with the discriminatory side of society, and together they try to go through the difficulties and be happy.

It is accurate, but I feel that Tariff is the protagonist of the story, despite the numerous subplots and countless characters. He is the central figure who suffers a massive tragedy initially and, by the end of the book, forgives one of the causes of this catastrophe. Despite the other plots running in parallel, Tariff's story is central. Reese appears twice in the characters' profiles.

James' murder is a punch to the stomach. We can see a happy couple, James and Tariff, about to meet for a celebration, talking over the phone, and in the following moment, James' life is taken by a group of homophobic thieves. It's a sad reality that produces a significant impact on the scene.

The large number of characters going to meetings, dinners, celebrations, breakfasts is a little confusing. The subplots are all exciting and relevant, but the amount of characters and their partners takes some of our attention.

The hook is the insecurity that surrounds these characters. One of them hides from his father that he is gay for fear of losing his family, the other tries to forget about his boyfriend's murder. Another character tries to leave behind a criminal and oppressed life and start again. Everyone is trying to be happy amid homophobia.

Yes, the dramas and conflicts could be intensified, but the relationships of these men are relevant and have the potential to attract fans.

The theme is relevant for the current moment, and the conflicts presented are significant to be discussed. The narrative would need further development, but its conflicts and characters could have the potential for awards.

THE L WORD: A SERIES THAT RECOUNTS THE STORY OF THE LIVES AND RELATIONSHIPS OF MANY LESBIAN AND BISEXUAL WOMEN. POSE: THE LGBT SCENE IN NY IN THE '80S

Tariff and Chuck, one of the gang members who killed James, meet and become friends. Their relationship ends up changing them both. Usually, the two would be on opposite sides in other films, but the two end up meeting and helping each other in this story.

Each character has its own story, involving a conflict resulting from society's homophobia, and that's why each one works individually. At the same time, they all work together as a group of friends, where each one enters with their own fears and conflicts. However, the characters could be more distinct from each other. It is sometimes challenging to keep up with the large number of different names and information. With more distinct voices and better-defined styles, it would be easier to visualize individuals within the group.

It is not exactly a rare gem, but it has the potential, if further developed, to delve into the gay universe and the results of homophobia poignantly and lightly at the same time.

For this amount of subplots and characters, the ideal would be an adaptation to a TV series and a more significant development of characters and subplots. It's difficult to keep up with each character who dates or starts dating another member of the group, with own conflicts, fears, problems, and subsequently, new problems and conflicts that arise from the very relationship between them all. Each character would need a more defined arc, more defined goals, more time for us to get to know each one. If the idea is to adapt to a movie, I would suggest reducing the number of characters. Even though the group works well in numerous ways, it is pretty challenging to tell the story of almost a dozen characters in two hours. Due to his better-defined arc, Tariff is a strong character who could play a leading role. The inciting incident impacts him initially, and he ends the story leaving this sad chapter behind and giving love a second chance. The dialogues are consistent with the discussions and situations, despite too straight to the point. However, the narrative could be dramatically enhanced. We are following the routine of all of them, however, everything seems flat from beginning to end, with exception of some conflicts and more impactful scenes. They have problems. They talk about their problems. They meet and have fun. It seems like real life, what ordinary people would do, but the actions and the plot could be a little more dramatized for a TV show or a movie. We could see how all these problems impact them deep inside, how these problems impact the group as a whole. The theme is relevant. The characters carry with them conflicts that are the result of homophobia. The relationship between them is exciting to see, but the plot lacks more purpose, more focus, and objective.