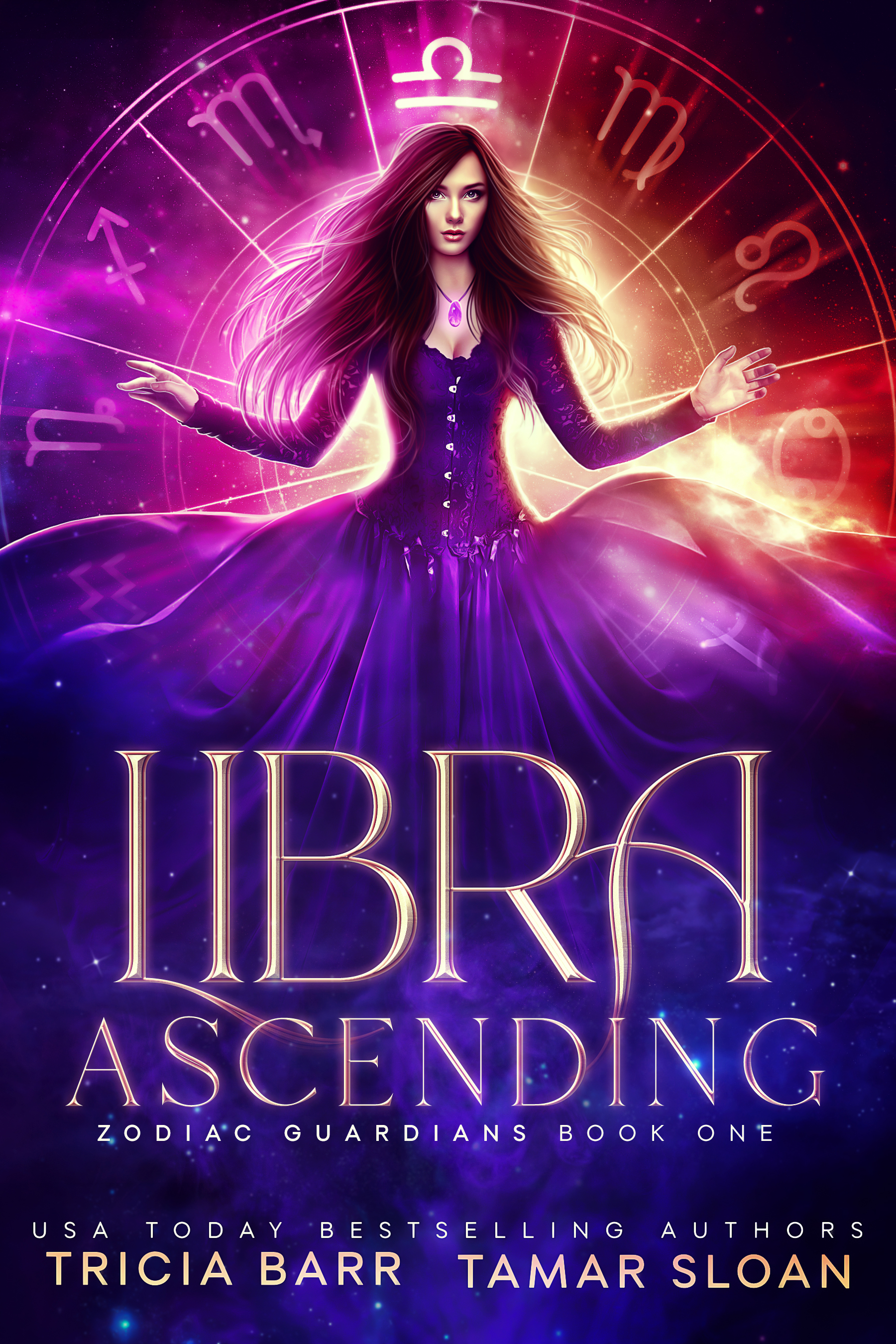 On the brink of adoption, Brielle tries hard to ignore her visions and be normal. Then Tristan shows up, and she's drawn to him like a moth to flame despite him talking about alien royalty and Universal destruction. Is she his missing princess? Will she have to give up her dreams to save the world?

Brielle is a quiet orphan of 17 about to finally be adopted, but she feels her freakish visions will ruin it--she can sense when someone is lying and see the truth. She tries to act normal, but new guy Tristan is brooding, mysterious, gorgeous, and has eyes only for her. She can't resist.


After lots of chemistry between Tristan and Brielle, she can't deny she has powers and is one of 13 Zodiac Guardians destined to save the Universe from an ancient evil. But, sadly, she's not the exact princess Tristan was looking for, and both are crushed as they move forward to find the other 11.

Twelve teens. One task. Save the Universe. Fans of the Marvel Universe and Twilight will love this first thrillingly romantic installment of the Zodiac Guardians Series. Brielle is an orphan with visions that terrify her, and she wants nothing more than a family and a normal life. Tristan has grown up knowing he's an alien prince sent to Earth with the other 12 Zodiac Guardians (alien royals just like him), and he's on a mission to reunite them and fight against the greatest evil the Universe has ever seen--Chardis. But there's one princess he wants to find the most, his missing Gemini Twin, his soulmate. He finds Brielle, and thinks his search is over. But despite her undeniable attraction to him, she refuses to believe the crazy things he says. In the end, she has to find the confidence to use her powers and stand up against the most powerful being in the Universe.

By day, Tricia is a full time mom to two beautiful girls and a wife/business partner to a handsome hard-working husband. By night—and nap times—she’s a USA Today Bestselling Author of unique and thrilling teen and adult fantasies inspired by her vivid, somewhat creepy dreams and her own adventures around the world. Tamar hasn’t decided whether she’s a psychologist who loves writing, or a writer with a lifelong fascination with psychology. She must’ve been someone pretty awesome in a previous life (past life regression indicates a Care Bear), because she gets to do both. When not reading, writing, or working with teens, Tamar can be found with her husband and two sons enjoying country life in their small slice of the Australian bush.

Brielle is an orphan teenage girl with a special power: she can read people's minds and discovers people's past. This power ends up giving her a hard time when it comes to being adopted. She will discover she is one of the 13 Zodiac Guardians when she gets in touch with other guardians.

Brielle is a 17 year-old-girl living in an orphanage, still trying to find a family. It's an interesting plot to open the story.

Not really. The story flows interestingly, and there are subplots that keep the narrative from being repetitive or boring.

The story of the teenage orphan who ends up discovering she is one of the zodiac guardians that could save the world.

I think so. It's a series for a young audience that mixes superpowers and romance. I do believe this audience would engage positively with the protagonist.

I don't think so. It's a story created to entertain the audience. It could have a chance, though, if it focuses and intensifies Brielle's internal conflicts while trying to be adopted.

THE UMBRELLA ACADEMY - SEVEN SUPER POWERFUL KIDS ARE ADOPTED BY A BILLIONAIRE AND END UP HAVING TO SAVE THE WORLD. THAT'S SO RAVEN - A TEENAGE GIRL WHO HAS VISIONS THAT CAN CHANGE OTHER PEOPLE'S LIVES.

The plot that a 17 year-old-girl is still trying to have a family and the fact that her unique superpower is what makes this search so hard.

Brielle is a standard girl who only wants to be loved. The fact she has superpowers doesn't change the fact she is this regular girl with a normal goal.

Not a rare gem, but if the story focuses more on the internal conflicts the girl have because she can "see" people's real intentions, it could end up being a beautiful drama.

It's well written and has well-developed characters, a protagonist that evokes empathy, and lines that work efficiently with the target audience. It has a good pace since things happen in a course we can follow easily, and despite having different subplots, the story feels uniform. The structure is solid, and it brings a hook for a second film, or a second season, so it has big chances of becoming a franchise. It also has commercial potential and appeals to the target audience. The premise is engaging and catchy, and it has a defined theme that helps the whole story, and its different subplots, to feel consistent. The author has good ideas, and despite not being tremendously original, the story mixes romance, superpowers, zodiac signs, the goal of saving the world, internal conflicts, an orphanage, and the adolescent struggles. These different elements improve the story and keep it from being repetitive and monotonous. It's a book to be considered, but obviously, it's a work to be further developed in order to reach a higher level.