The Substance of Things Hoped For: A Novel 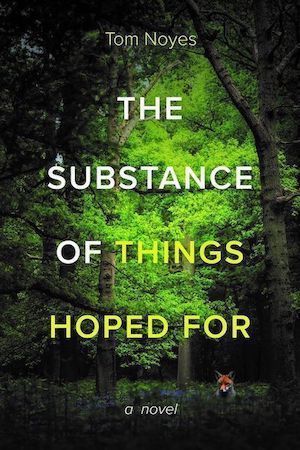 For a brief time in mid-19th century Oneida, New York, two of the most eccentric and fascinating figures in American history crossed paths when troubled soul and soon-to-be presidential assassin Charles Guiteau threw in his lot with John Humphrey Noyes’s utopian community of “free love” believers.

CHARLES GUITEAU, a new resident of the Oneida Commune, follows the commune’s founder and leader, JOHN NOYES, into the woods one morning to interrogate him about a sermon Noyes has delivered. Guiteau’s words and actions unnerve and intrigue Noyes, who carries in his pocket two fateful letters.


Guiteau's sister, FRANKIE, and President Garfield’s widow, LUCRETIA, endure the circus-like murder trial in Washington D.C. After sentencing, Guiteau vacillates between denial and acceptance. Meanwhile, Noyes, on his deathbed, is visited by ghosts of his past.

In The Substance of Things Hoped For, Tom Noyes—a distant relative of 19th-century religious leader John Humphrey Noyes—deftly imagines the dynamics and consequences of the controversial figure's brief but ominous relationship with presidential assassin Charles Guiteau. Over the course of the novel, John Noyes works through personal tragedy and trauma in attempting to realize his vision of a perfectly free social, sexual, and spiritual paradise, but he is ultimately undermined in his efforts by rivals, detractors, and, above all, his own hubris. Meanwhile, the haunted and desperate Charles Guiteau, who comes to Oneida as a young man seeking direction, companionship, and respite from his abusive father and his own delusional mind, instead stumbles further into madness and eventually achieves infamy for his murder of President Garfield. Over the course of the novel, joining Noyes and Guiteau in their parallel narratives, is a chorus of other characters—family members, lovers, rivals, strangers, notable historical figures—whose haunting voices complement, undermine, complicate, and enhance Noyes’s and Guiteau’s versions of events, while also homing in on the novel’s most pressing, timeless questions, including those related to revelation, delusion, loyalty, leadership, and love.

Tom Noyes's newest book is The Substance of Things Hoped For: A Novel (Slant, 2021). He's also authored three story collections, including Come by Here: A Novella and Stories (Autumn House, 2013), winner of The Independent Press Awards’ Gold Medal in Short Fiction. He directs the BFA in Creative Writing Program at Penn State Erie and serves as Contributing Editor for the literary journal Lake Effect.

While John Noyes creates a community based on free love, Charles Guiteau takes refuge in this community to exchange spiritual thoughts with the religious leader. The two start to relate, but Charles decides to end the romance and leaves the community at some point. After years, Charles will be responsible for President Garfield's death, while John leaves his own community and travels to another country far from his people.

The author describes John and Charles as the story's antagonists, but they are actually the protagonists, even if anti-heroes.

The early backstory sequence of John's life is touching and quite well written. We understand how that family works and how George's death actually affected John's psychological and life.

The structure is confusing and ends up taking away some of the emotion of reading. With each new chapter, a new narrator tells a part of the story from his perspective. This choice helps us understand the whole story without a single bias. However, it takes away the empathy we could feel for the main character and makes the narrative truncated.

The meeting of a religious leader from a hippie community and the murder of President Garfield is a fascinating premise.

If adapted more clearly, with a better-structured narrative and a character that we could follow without further interference, I believe so. The two personalities have the appeal to attract a larger audience.

If the story were even more loaded with drama, the meeting of these two emblematic figures could indeed have the potential for awards.

MIDSOMMAR: A GROUP OF FRIENDS VISITS A RELIGIOUS COMMUNITY, AND THEIR ENDS IS TRAGIC. THE COMMUNE: A COMMUNITY THAT TRIES TO SURVIVE PERSONAL TASTES, SOLIDARITY, AND TOLERANCE IN THE 70S.

The backstories of both make us understand a little of their personality and why they took the steps they did. The dialogues give them exclusive voices. While John is good at talking, Charles ends up becoming more and more lost in his dialogues. Characters are powerful in their developments.

It's not a rare gem. It has many good elements, but the structure in collective narration ends up taking some of the shine out of the narrative.

The author has a great premise. Characters are already well built, well written, with unique voices, good dialogues that even show the emotional state of each one. The meeting of two outstanding characters is exciting and attractive. Universes, shaped by faith and spirituality, are also attractive. And the way they both relate and end up influencing the other's future is also enjoyable. However, despite being well written, having good characters, having a premise that guarantees a great story, the narrative does not take off. When we start a chapter, we get in touch with the universe of that character and the problems and situations related to him. The first-person perspective helps us enter that character's private universe. However, when we are familiar with that universe, those rules, and characters, we are sent to another place, with new characters, a new perspective, and new rules. This coming and going makes reading more complicated and prevents the reader from feeling the story deeply. Having multiple points of view is interesting when we want to discover something, analyze a case without the bias of a single character. However, since the stories of these two characters are already popular, this artifice loses its impact and makes the narrative less intense, without drama. A change in the narrative structure, with a more linear story (not necessarily chronologically), would make the meeting of both characters more touching and impactful.