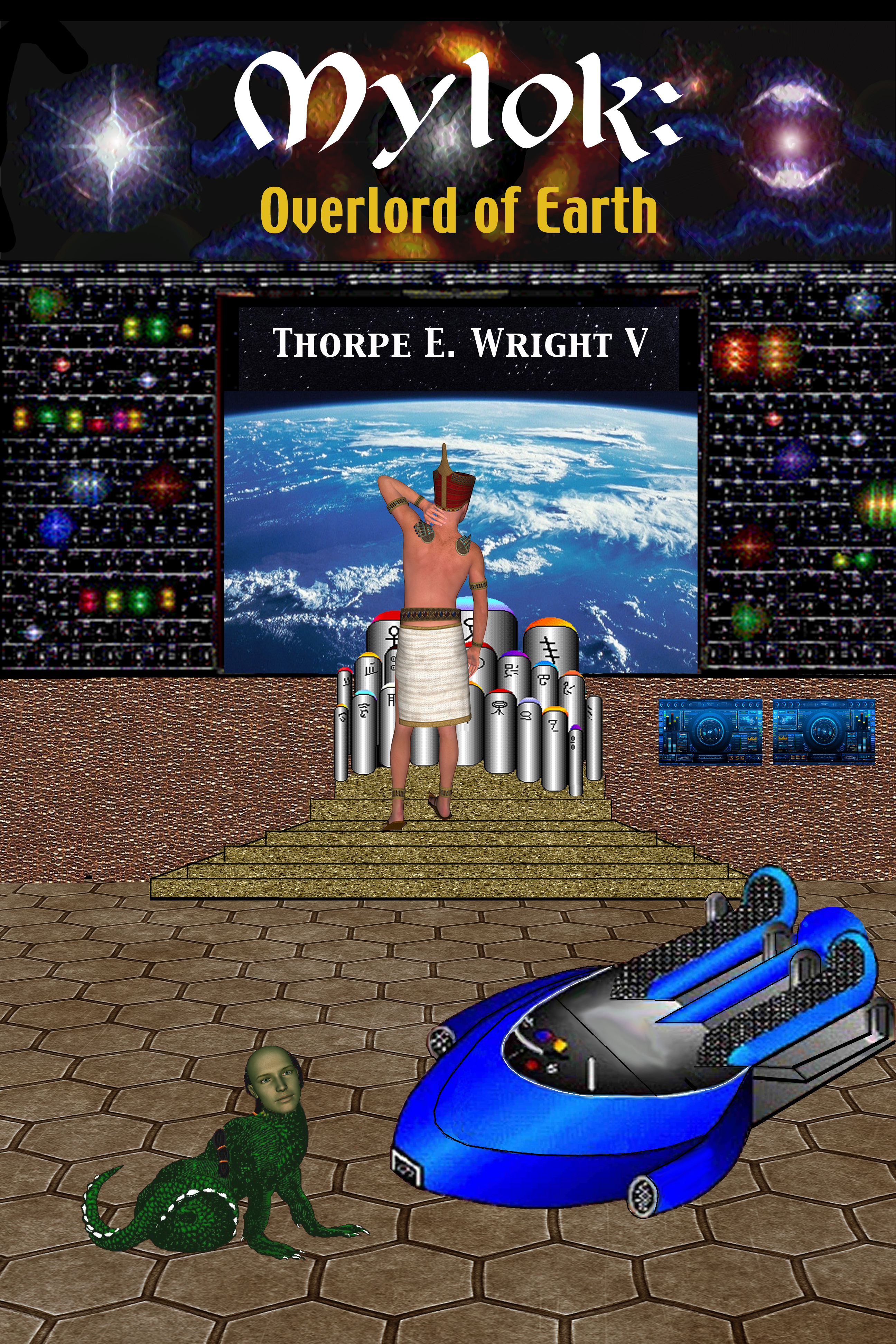 Born a pre-Egyptian slave, a man is given great knowledge and extended life after being abducted by aliens. Today, he rules a world beneath the Bermuda Triangle. An American woman holds the secret of the survival of the earth. Can the two save the world from certain Armageddon!

Born a pre-Egyptian slave, a man decides to run from slavery after the death of his father. After running in the desert, the end is near. The man is abducted by aliens - given great knowledge and extended life. 5,326 years later, it is now the 1980s. The man greets a woman in a restaurant.


The world is destroyed by an asteroid impact. Mylok's people restore the missing orbs and perform the Global Genesis. The earth's frequency is changed and the world travels back in time before the asteroid - the earth is saved! The couple marry and continue to protect planet, Earth.

Massachusetts, France, beneath the ocean's crust of the Bermuda Triangle area.

How did the pyramids around the world come into existence? Who can explain the mysterious vanishings within the Bermuda Triangle? Only one man knows the true answers and his name is Mylok. Abducted by a race of superior alien beings, Mylok learns to use his mind and body to go far beyond the limits of any human. Through technologies far greater than our own, Mylok is given the gift of remarkable life extension. By a computer of alien design, known as the Tzorb, Mylok gains access to all knowledge. Unbeknownst to herself, an American woman holds the key to the survival of the earth. In their desperate search, Mylok shows the young woman a world unlike anything she could have ever imagined. Mylok’s pet, a half man/half dragon creation with an IQ of 182, helps the woman to blend into Mylok’s futuristic world. In the hopes of saving the earth from certain destruction, Mylok and the woman fall in love. However, can the relationship last with a woman in her early twenties with a man of some five thousand five hundred years of age...and can the earth survive? Cover and illustrations by Thorpe E. Wright V

Thorpe (“Thor”) E. Wright V, is a descendant of British royalty from the House of Thorpe. Thor spent his early teenage summers as a cattle rancher. Being raised in the suburbs of Boston, Massachusetts, USA, he is a graduate of Assumption College with a B. A. in Business Management and a minor in Computer Science. For fourteen years, Mr. Wright worked as a motion picture operations manager/projectionist for the largest theatre chain in the Boston area. Thor obtained a CDL A license, and later drove a 53' tractor/trailer across the USA for two years. As an eclectic martial artist with over forty-eight years experience, Thor taught Kempo karate for ten years, and later co-founded the Cambridge Institute of Martial Arts (CIMA). He is proficient in many forms of eastern meditation, and is an astral traveler. As president of ThaiCat Productions, Shihan Wright hopes to someday syndicate his own TV show to educate people about the variety of martial arts and teach eastern philosophies. Thorpe Wright is posted on the Internet Movie Data base @ www.IMDb.com as an executive producer (2 credits), associate producer, and a technical advisor (2 credits), for three independent films. Thor had spent a year in writing this book – his first book. Currently self-employed and a bachelor, Mr. Wright lives near Boston, MA -- not far from the Boston Museum of Science and the beautiful Charles River. Cover and illustrations by Thorpe E. Wright V.

An Egyptian who has been abducted by ET's gains powers of longevity and full knowledge. He commands a civilization that seeks to save the Earth from imminent danger. Mylok, the Egyptian, discovers that an American girl holds the key to survival on the planet and goes in search of her in an attempt to save human existence by her side.

The half-human half-dragon Maxalavar appears duplicated in the character session. For the rest, it looks accurate.

The book already begins in a futuristic environment, positively impacting us on the adventure and sci-fi paths that the story can take.

The book repeats itself a lot, and the dialogues take away the opportunity for discovery. The author uses a technique based on questions and answers about the story's universe. The protagonist orally -through dialogues-explains this universe's rules, the risks, the possibilities, backstory, predictions for the future, new technologies, and his routine as a mentor. It is quite tiring because we could discover this universe little by little, but we are bombarded by pages and more pages of explanations about this environment, about these people, about how things work.

The hook is this "fantastic" world that coexists with our own world. This idea that aliens are trying to save the Earth through a 5 thousand-year-old Egyptian who still lives among us. At least, the book's adventure tone is a good hook to hold the audience in the beginning. We already start the story expecting a magical futuristic universe that mixes ancient history with sci-fi full of extraterrestrial literary references.

The narrative needs a lot of development to become a more attractive product for fans. Some choices are doubtful, and the sequence of actions seems to have been created more to make us believe in this universe than actually enjoy it.

No. The work would require extra conflicts related to the human race, conflicts linked to this man who carries a burden of living for over 5,000 years to save us, conflicts from this older man's relationship with a young woman, the distance of generations. Various conflicts and questions could be raised by this story.

THE MAN WHO FELL TO EARTH: AN ET WHO FELL ON EARTH, NEVER AGES, AND USES HIS ULTRA-TECHNOLOGICAL KNOWLEDGE TO SAVE HIS OWN PLANET. KNOWING: A PROFESSOR DISCOVERS THAT SOME NUMBERS FOUND IN A TIME CAPSULE PREDICT PAST AND FUTURE DISASTERS

The half-dragon half-man pet that assists Barbara on her futuristic journey seems unpredictable. The love between a 5,000-year-old man and a 20-year-old girl, from totally different places and generations, is also something that we don't see frequently.

The characters had the potential to present their diverse and disparate characteristics largely. A 5,000-year-old man who was born in the pre-Egyptian era is at least a curious character. However, this man sounds absolutely ordinary. Even though he lives in contemporary times now and knows how to behave properly, he has all the knowledge in the world and is a 5,000-year-old elder. At the very least, we would expect someone more out of the ordinary, more impressive.

It is not a rare gem. It would need significant development in dialogue, characters, conflicts, purposes, goals, and actions to become more relevant within the genre.

The author brings many elements, and maybe that's why the book sounds too short for so much explanation. If it focused on the most relevant elements, perhaps the story would become more cohesive and enjoyable. Some cliches also appear here, such as the aliens present in ancient Egypt, the aliens that offer extensive knowledge and longevity for a common person, the chosen one to save the planet, and the Adam and Eve romance that will help the reconstruction of a better world. Cliches are not a crime, but too many of them can be fatal. Trying to reduce the focus on these conflicts that are already widely used and give greater prominence to the story's original elements might help. The characters have extreme potential to bring complexity and drama to the story, but they are misused. A 5,000-year-old Egyptian is a great character, especially when he relates and falls in love with an American girl in her 20s. Both have very different experiences, motivations, ways of expressing themselves, ways of seeing the world, and backgrounds, which could generate conflicts, but this happens very little. The intentions could be better, as when Mylok says they'll never be able to see each other again, but after a couple of months, he shows up saying he was passing by and decided to say hello. If they were going to meet again (which was expected), why create a non-existent conflict that they would never meet again? This does not amplify the plot conflicts. It just gives the story a less realistic feeling. So, thinking about really relevant actions is crucial for this work that mixes adventure and science fiction.