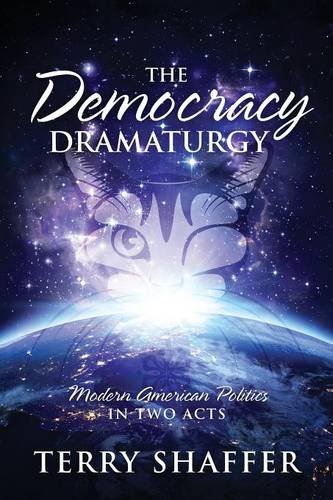 A disgruntled hippie is accidentally transported to the planet Murphid which has designed its society around American television programming from the 70's. He returns to an Earth run by women and led by de facto dictator, Audrey Clinton-Bush whose power is challenged by the last male moron.

Journalist Martin S. Cribler battles his demons as he attempts to convince his readers to understand how they've been used.


His former rival, now political ally, Ayn L. Fisher, describes Mo's passing after they have worked together from the Left and the Right to restore American democracy.

The Planet Muphrid and the future American southwest.

The Democracy Dramaturgy is actually two stories: one satirizing the nation's past and the second its future. In the style of Gulliver's Travels, it is divided into two "acts." The second act, Mudwat's Bodhi, could be independently adapted for film purposes and it is extremely topical. In it, Mo returns to a nation run with an iron fist by female dictator Audrey Clinton-Bush (who changes her name to Bush-Clinton after elections to leave the impression change is occurring.) Her nation is divided into walled units to ensure people only speak with others who agree with them. Mo and his talking, one-eyed cat are assigned to the unit called "Deadhead" where they meet conservative firebrand Ayn L. Fisher - Mo's political antithesis and future lover. Meanwhile, Audrey's authority is being challenged by a slovenly fake writer named J. Bryce Dupont (formerly Arthur Dungshortz) whose actions to undermine her government are being directed by alien stinkbugs. Together, Mo and Ayn tear down the walls while they discover that sometimes progressive approaches are best and sometimes conservative approaches work better. But they're both better than some feeble compromise in the center.

Terry Shaffer worked for fifteen years within the seedy realm of Pennsylvania politics and his debut novel, Random Notes From a Specific Deadhead, was based on those experiences. Like the Bronte sisters, his stories are largely inspired by his cats yet he still claims to be sane. The Democracy Dramaturgy, a satirical indictment of modern American politics, anticipated the emergence of a Trump-like usurper (and his wall) before his candidacy was announced.