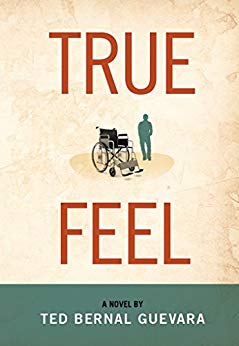 A paraplegic Chicago reporter investigates a murder in which the suspect is an exotic dancer, his love interest.

In the beginning, Marion claims: "I am a reporter for a major newspaper, capable of doing practically anything in my life. When I stumble upon a person whose face resembles a photo tucked in our murder file, the first thing I do is make my affection valid...and my investigation relentless."


The killer is revealed. Down a musty path, there would have been a procession of an upright person to join his better half.

True Feel is a scenic but buckled sidewalk Marion Rafino wheels through. He is casing a lurid killing in Texas, and the main suspect is exotic dancer Credence to whom he is attracted. The book is made up entirely of the characters' dialogs and their accounts--to which the storytelling and plot move in picturesque detail and stark honesty. Credence upon meeting Marion says: "While at a boutique, I see this man in a wheelchair looking for scented soap. I lend a hand, of course. But at a glance, he shies away. It is when I see him again at my workplace does he get into my business desperately." Marion notices her again, this time working at a Chicago nightclub. A fellow reporter with him thinks she looks familiar and asks Marion to anticipate where they may have seen her first. Snapshots taken from the butchery scene in Corpus Christi is reexamined. But it does not convince Marion. It just brings a dab of inquest every time he goes back to the nightclub. He discovers that Credence belongs to an entrepreneurial group that dances its way across the country. To make his urge whole, he travels down south and singlehandedly tries to solve the murder. But does he find the pitfall he fears the most? If Credence is the girl in the photo, what then? Does he lose all hope, even in a medical frontier that can make him walk again?

Ted Bernal Guevara resides in Speedway, Indiana, where he is a freelance writer. He is the author of two James Dean conceptual novels, Days of Slint and Lips of a Mastodon. His first novel, A Circle with Two Corners, won praises from Midwest reviews, including one from Fort Wayne's The Sentinel. The crime-romance novel, True Feel, came out in May 2013 and was revamped in its Second Edition in 2017. Although he delves in an array of themes, always looking for the unusual and the edgy, Guevara finds adherence in the plight of the disabled and all their "profound richness," as he has stated. At age 9, his family moved from the Philippines to Marion, Indiana—where all his physical challenges were realized and at same time, rewarded. His physician father never taught him how to dribble a basketball but had trained him to type a thousand words per day, from notable books, to increase his typing speed. Ted caught the literary bug instead in the exercise. How to Design a Threshold, a novel on clairvoyance, wish and reality, is coming out in 2020. Guevara has also published two volumes of poetry, Films and Birds on Elephant, from Anaphora Literary Press, 2015. Upcoming in May 2019 is the volume, Tonto and Destinata.