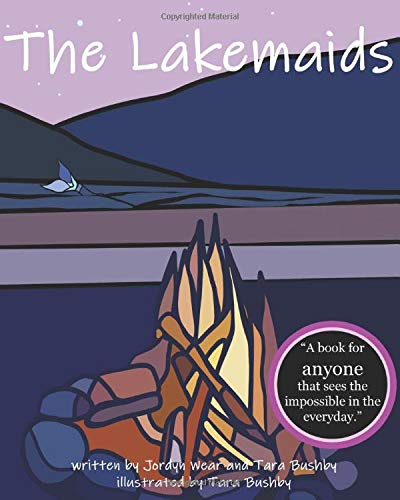 “I heard you wandering around last night,” grandma said. “I couldn’t sleep.” The little girl hesitated, then blurted out “and I think I saw a mermaid!” She expected her grandma to laugh, or tell her she was being silly. Instead, Grandma’s eyes twinkled, and she set down her cup.

In the middle of the night, a little girl could not sleep. So she got out of bed to get a glass of water, she looked out her kitchen window and to her excitement she saw something that looked like a mermaid in the lake right beside her dock.

This is a story based on a little community called "Lake Cowichan" on Vancouver Island. It is a story of wonder and imagination, diving into her grandmother's wise lake legend of the ancient Lakemaids that once filled the lake that they lived beside. This children's story will capture your little ones' imaginations and draw them in to the possibility of the impossible. After hearing this story, when the moon is high and the stars are bright, your children will look out over the water and dream of seeing a splash and flash of green.

Jordyn is a lifelong resident of Vancouver Island and a graduate of Vancouver Island University’s English program. When not writing, reading, or working as an office manager, Jordyn spends her time watching hockey, trying her hand at art, yelling/crying at reality shows, and forgetting to do her daily French lessons. She still aspires to be an X-wing pilot; failing that, she’ll settle for forest witch. Tara enjoys creating with both words and art. When she is not writing she spends her time painting abstract acrylic landscapes, and being both an entrepreneur and a mother to her two beautiful children. She lives with her family on Vancouver Island: her daughter Faith was the inspiration or her first children’s book “Faith and the Forest,” while her island home is the inspiration behind many of her paintings and stories.

A little girl wakes up in the middle of the night and sees through the window what seems to be a mermaid swimming on the lake nearby. Curious, she asks her grandmother about mermaids. Expecting an adult reaction that mermaids do not exist, she is surprised by a tale that fills her with hope.

It does, but the profile states that the target audience is 6 to 55. It is a tale that the whole family can enjoy together, but the story itself will draw children's attention more easily.

The story is straight to the point and beautiful. It talks about hope and imagination through a simple and entertaining tale.

No, the author manages to sustain our interest in what is about to happen. However, I think the tale could have more elements, twists, and more characters.

The hook is the child's innocence and the belief that the phenomenal, the fantastic exists.

If the authors expand the project and develop a series of fables for children whose protagonist is this little Canadian girl, the series would have the potential for a fanbase.

It depends on the quality of the cartoon, the animation itself. I believe that the fable could be further developed in order to increase conflicts and twists, and better elaborate characters. With good drawings and compelling stories, the narrative (as part of a series of tales) could have some Awards' potential.

MASHA'S TALES - A YOUNG GIRL RETELLS FAMOUS FAIRY TALES USING HER OWN IMAGINATION. FAERIE TALE THEATRE - EVERY EPISODE RECOUNTS THE TWISTS AND TURNS OF A FABLE.

The fact that the grandmother does not discourage the granddaughter's imagination. On the contrary, she is the one who makes the little girl believe that mermaids do exist.

The characters could be further developed to gain more striking characteristics. It works with a child audience as it is performed now, but grandma and granddaughter could be a little more unique and remarkable.

It is not a rare gem, but stories designed for kids are a consistent content model, especially those that stimulate the imagination. If better developed and expanded into a series of tales, it could become much more relevant in the genre.

A single story about mermaids doesn't have enough elements to become a feature film, nor enough content to become a TV series. It could become a short film, which is a good start. But as the story's foundations are exciting, the authors have the potential for a series of fables arranged in a season. The little girl is Canadian, the authors use real Canadian locations to illustrate the fable, and the story mixes children's reality with imagination. The little girl has the power to become a protagonist who lives different adventures in Canada. However, we would need extra narrative elements, twists, a better-designed conflict, a goal for the protagonist in each new episode, and character development that would give us a more complex and reliable relationship between grandmother and granddaughter. The authors’ style, the protagonist's desire to discover new things, and the story's progression are attractive, but they need development for a remarkable adaptation.