How to Escape an Arranged Marriage in High Heels 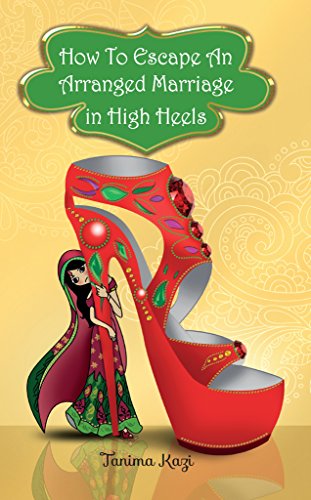 Maya Khan decides to run away from a marriage arranged by her Indian family. Now, she finds herself with no money, no job, and nowhere to live. Away from her family, she will finally live the life she desires, even if she has to confront her past and everyone she used to submit to.

Maya Khan wants no part of an arranged marriage. Unfortunately, she makes this discovery on the day of her wedding. Panicking, sweating, and swearing simultaneously, Maya escapes out the back window. She calls her best friend Angie who lives nearby and ends up crashing on her sofa.


The story ends with a wedding. Her best friend Angie's wedding. Maya also runs into the boy she has been in and out of love with for the whole novel. They declare their love for each other on New Years Eve outside of the wedding venue and live happily ever after.

Maya Khan wants no part of an arranged marriage. Unfortunately, she makes this discovery on the day of her wedding. Panicking, sweating, and swearing simultaneously, Maya escapes out the back window, scales down her parent’s two-story house in her big, flapping sari, and lands on her best friend’s sofa. She begins to piece her life back together by first working at a hookah lounge which turns out to be an undercover brothel, she then goes back to school and finds out that her arch-nemesis from high school is now her professor. The man who has been helping and guiding her is engaged to her arch-nemesis. She manages to get an internship at the Chicago Tribune where she is being manipulated by her boss to use unsavory tactics to get stories. All the while her family is still looking for her. By overcoming obstacle after obstacle she begins to cultivate an inner strength she didn't know she had. She also begins to figure out the elements of life that make her happy.

Tanima Kazi loves to read: her love of reading inspires her to write. Born in Dhaka, Bangladesh, she has had the pleasure of living in many different countries such as Saudi Arabia, Canada, and the United States, where she currently resides in Wheeling, Illinois. She is working on her second novel and avoiding the beckoning call of Netflix binge-watching. Traveling, writing, and eating are her favorite past times.

Maya Khan decides to run away from a marriage arranged by her Indian family. Now, she finds herself with no money, no job and nowhere to live. Away from her family, she will finally live the life she desires, even if she has to confront her past and everyone she used to submit to.

Yes, it does depict the book properly.

The fact that the protagonist, even though she was brought up in a really conservative environment, manages to be open-minded, funny, badass and ultimately able to free herself from all ties.

The protagonist's sense of humor sometimes feels a little off, especially at the beginning.

An Indian girl defying tradition and her own family in order to be herself and live by her own rules.

Possibly. Stories about people who rebel against nonsensical, restrictive traditions tend to attract some attention, especially from younger audiences.

Some adaptations and changes would be required, but the theme is very strong and dealt with in an unusual light, good-humored fashion, which could have some Awards potential.

RUNAWAY BRIDE - A FILM ABOUT A BRIDE WHO HAS RUN AWAY FROM MARRIAGES COUNTLESS TIMES. INDIAN MATCHMAKING - A NETFLIX DOCUMENTARY SERIES ABOUT INDIAN PEOPLE GOING TO ARRANGED DATES AND TRYING TO FIND A PERFECT MATCH.

The good-hearted way some strong themes are dealt with is very different. The humor itself, however, could be better developed at the beginning, when the protagonist seems to naïve to be realistic.

They are well-developed, have strong characteristics and mostly defy traditions in one way or another.

Not a rare gem, but with some improvements made to the humor of the book, the protagonist's actions and to some weird time standards (apparently too many things happen in reduced periods of time), it could become one.

Because the author has an interesting, well-developed voice, that could translate very well to the screen if adapted. Also, it is great to have a story so diverse, about an Indian girl fighting against a familiar and cultural tradition that simply doesn't make sense to her anymore, and written by a Bangladesh-born woman. The dialogues are also great, and the protagonist's sarcastic views eventually get sharp and really funny. Most characters are really well-developed, including her parents, who seem to have been inspired by real people and the writer's own experiences with her family. It is also a somewhat daring narrative, with the protagonist getting herself involved in a relationship with a married man and having sexual experiences without being married (still a taboo in many cultures, including the Indian one). However, to be adapted, the book would have to go through some changes. At the beginning, the humor feels somehow weird and misplaced, and the protagonist's point of view is to naïve, even though she has had some previous rebellious experiences. Furthermore, the passing of time is strange. She abandons her wedding and her family, goes back to college, rearranges her life, is hired as an intern by a large newspaper, finds a love interest, her best friend dumps her good-for-nothing boyfriend, all that in four months. It doesn't seem realistic. And, finally, some of the major events of the book, such as her running away from her own marriage, seem to happen too fast and have little emotional consequences for the protagonist. As a major turning point for the character, the occurrence should be more difficult for her and its description could occupy a bit more than just a few paragraphs.