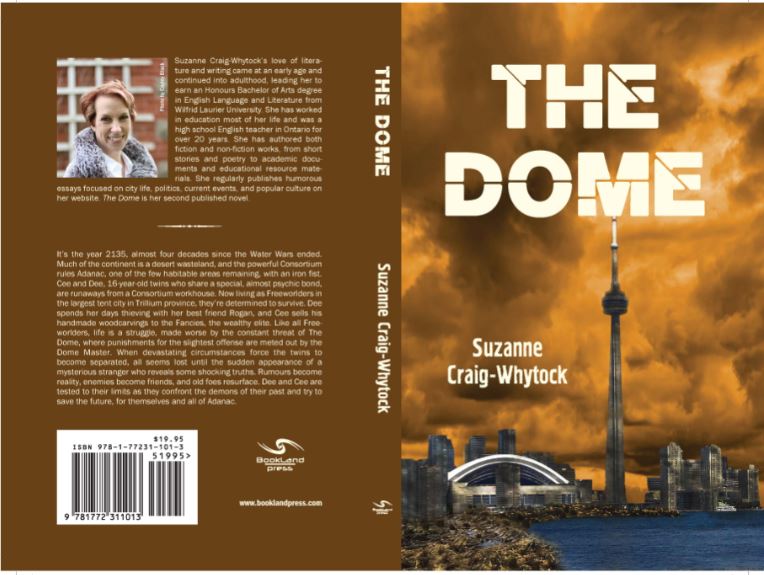 16 year-old twins Cee and Dee share an almost psychic bond. They struggle to survive in a post-apocalyptic world ruled by The Consortium. When devastating circumstances force them apart, they become involved in a rebel movement, fight personal demons, bring down The Dome and try to restore Adanac.

Dee, a thief, and her twin brother Cee, an artist, are orphans, surviving in Divinity, a tent city, in 2135, after the Water Wars. It opens with Dee and her best friend Rogan stealing jewelry from a rich Fancy, and then being chased by a locator drone, known as a Lobot. They narrowly escape.


The twins join a rebel faction who has come together to overthrow The Consortium. Cee uses his recently discovered powers but is injured by Songe, the antagonist who is obsessed with Dee. Dee discovers her own power and defeats him as the rebels, led by the twins' father, win back the country.

The Dome is a novel that would be perfect for the screen because it has an fascinating and immersive setting with complex characters that an audience can identify with. It takes place in a dystopian future ravaged by climate change and war, which are very compelling topics. While it has a fast-paced and suspenseful plot, the characters have depth and will appeal to both teenagers and adults. Dee is feisty, impetuous and fiercely loyal, but she's haunted by being abandoned to a workhouse and assaulted by one of the older Guardians, who later makes a surprise return as the main antagonist, still obsessed with her. Cee is cautious, protective, and dreams of one day being reunited with their mother and father, never losing faith that they will be a family again. They both have hidden powers that they're initially unaware of: Cee can create earthquakes through a sonic implant and Dee can harness the power of electricity. When they discover their abilities, the earth shakes and lightning crashes, in an Avengers-style climax. There's a rebel movement, led by the legendary Darv Bouchard, and their allies The Frags, fierce zombie-like creatures from what used to be the United States but which is now a desert wasteland. There's also a romantic arc for each main character that an audience will respond to emotionally. Despite the sweeping plot and unique characters, the underlying message is one of hope and the importance of family that audiences of all ages will connect with.

Suzanne Craig-Whytock’s love of literature and writing came at an early age and continued into adulthood, leading her to earn an Honours Bachelor of Arts degree in English Language and Literature (Wilfrid Laurier University). She has worked in education most of her life, and was a high school English teacher in Ontario for over 20 years. She has authored both fiction and non-fiction works, from short stories and poetry to academic documents and educational resource materials. She regularly publishes humorous essays focused on city life, politics, current events, and popular culture on her own website. The Dome is her second published novel.