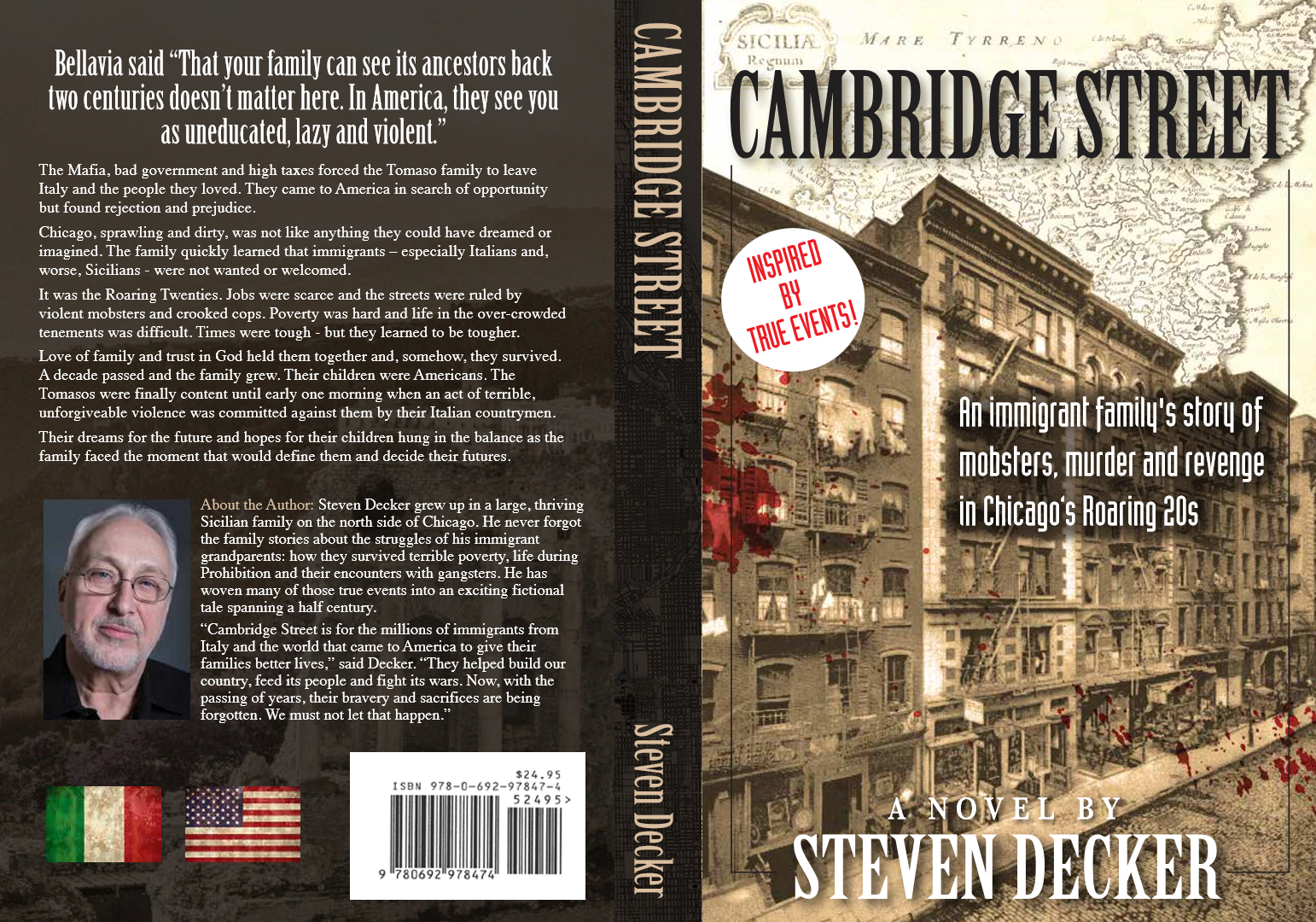 In Chicago’s Roaring 20s, where mobsters and crooked cops run the streets, an immigrant family relies on each other and their faith in God to survive. And then they came to kill him.

1917. On a small family farm in Sicily, the elder Tomaso tells his family that taxes and poverty have made it impossible for the family to stay together; that his three sons must go to America to start new lives.


1927. A terrible act of violence causes a defiant Paolo to swear revenge against local capo. The crime boss will not - cannot - tolerate such disrespect and sends men to kill the young immigrant. Paolo and wife Gianna must somehow outwit the thugs who have come to kill him.

Age: twenty five ish in the beginning, eighties at the end

Cambridge Street is a universal drama that will draw a wide audience. It's the story of immigrants who came to America a century ago with no money, no language skills and no support. The simple Italian farmers come to an ugly, squalid Chicago at the dawning of the Roaring Twenties. The sprawling, squalid city is beyond their wildest dreams. They are now the lower class, living in a fourth floor tenement apartment in Little Sicily, also known as Little Hell. The settings are cinematic, rich in texture and both beautiful and terrible as the family goes from a picturesque citrus farm in the rolling hills of Sicily to the big, cold, grey America city. Cambridge Street is classic in the sense that these are innocent people who, through no fault of their own, become caught up in a web of terrible violence with no way to escape. This story will take viewers on a roller-coaster ride of emotions. It's a passionate love story. It's a violent mob story. It tells of the plight of immigrants, then much as now, to stay together and to survive. It's about the glue that holds a family together and it's a story of the struggle to survive. The characters, both good and evil, the settings and the story are deep and fascinating and will translate to miniseries or film with color and intensity. It's a large part of our American story. Viewers will love the screen version as much as they love the printed version.

About the Author Steven Decker grew up in a large, thriving Sicilian family on the north side of Chicago. He never forgot the family stories about the struggles of his immigrant grandparents: how they survived terrible poverty, life during Prohibition and their encounters with gangsters. He has woven many of those true events into an exciting fictional tale spanning a half century. “Cambridge Street is for the millions of immigrants from Italy and the world that came to America to give their families better lives,” said Decker. “They helped build our country, feed its people and fight its wars. Now, with the passing of years, their bravery and sacrifices are being forgotten. We must not let that happen.”