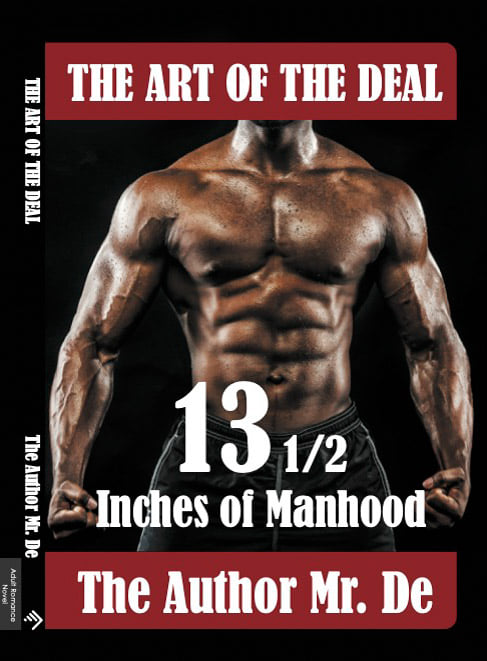 The story begins when a new neighbor moves in from across the street from where Nicole lives, being a wife and mother she is conflicted with her lust and desire to be a faithful wife. The book gets into more and more details about how the two started an affair. AWESOME READ!

Wife Nicole, witnessed a super fine and sexy black male who moved across the street. While husband (Dr. Kareem) is away at a conference, wife Nicole and the Super fine black male (Styles) becomes enthralled in a sexual relationship that goes from 0 to 100 in intensity.


Nicole shares affair with her bFF Tamera, because this is out of character for Nicole. Friend Tamera decides she wants in on the actions and meets Nicole's husband Dr. Kareem and they begin a Hot Sexual affair. Nicole finds out about it and she lover Styles flies to ATL to approach Dr. Kareem

STARTED IN CALIFORNIA... ENDED UP IN ATLANTA, GA

This book is a realistic story that captures the essence of what average people deal with on a daily basis. Unexpectedly a super fine black male arrives a his brother's home just across the street from Dr. Kareem and wife Nicole. Two beautiful, sexy and successful people. While the doctor was away on a medical conference, Nicole just happened to be looking out the window when this specimen of a man known as (Styles) arrives. This is the beginning of a Hot and sizzling sexual encounter of the 5th kind. Nicole was smitten with Styles and he took her places sexually she had never been both physically and mentally. Nicole is in disbelief and shares the affair and activity in detail with her BFF Tamera and they both are taken aback at the decision of Nicole to engage in the activity and the level of sexual action. Well! Dr. Kareem is a super find black male as well. Tamera betrays her friend Nicole, and begin sleeping with her husband Dr. Kareem... as she would travel to meet him at his various conferences. Nicole gets wind of it. She goes ballistic and decides to pay her husband an unexpected visit in Atlanta, Ga. while she and Styles plot her action to approach her husband. She realizes Tamera is in Atlanta with Dr. Kareem. Just so happened, Styles and Nicole was in the hotel room, they decided to engage sexually, and while doing so they heard another couple who was even more sexually engaged during the same time. Little did they know, IT WAS DR. KAREEM AND TAMERA. IT'S MORE

Book Summary/Synopsis (maximum of 100 words):  "The Art of The Deal" and Subtitle “13 1/2 Inches of Black Manhood" is an intense Sexual Romance Novel that promotes a safe place for a highly mental self-stimulation through fantasizing and mental imagery. The characters are so well developed and intertwined until the plot structure will transition the reader from an amazing commencement of sexual expectation to a physical and perceptual full-throttle climax.  Author bio or about the author (maximum of 100 words):  The Author Mr. De, Has written an Explosive mesmerizing romantic thriller! Mr. De is a well-rounded author who is very capable of stimulating the mental and sexual state of mind to a climaxing resolution. The Author Mr. De’s Scandalous emotional seduction is realistically tempting and appealing to both women and men. In the book “13 ½ inches of Black Manhood,” Mr. De transitions his readers from sex appeal to sensual seduction, to sexual satisfaction, ultimately to an intensive sexual climax. The four characters in this book are nothing short of “Aphrodisiacs” in their own rights. “The Art of The Deal” aka “13 ½ inches of Black Manhood” will surely satisfy any sexual urge or appetite. It is arousing and engaging, with certainty to bring pleasure and desire without any inhibitions. Very Highly Recommended!

When a new neighbor arrives in the neighborhood, Nicole feels attracted like never before. The problem is: She's married. But this detail won't stop her from experiencing multiple sexual adventures with her attractive neighbor.

It is accurate. However, Nicole could be presented as the protagonist.

The author wastes no time before getting into the action. In the very first scene, it is possible to see the attraction Nicole feels for her new neighbor.

The book could have more conflict, more moral dilemmas, inner conflicts. Nicole is already attracted right away and doesn't seem to feel guilty about wanting her neighbor. She could feel a little more doubtful before embarking on the sexual adventure.

A lonely woman at home, because of her husband's constant travels, decides to try new adventures.

No. By the detailed sex scenes, the book would attract a mature audience looking for sensual movies.

Not exactly. It would perhaps have some potential with awards destined for sensual stories.

FIFTY SHADES OF GREY: A SHY GIRL EMBARKS ON A MASOCHISTIC ADVENTURE WITH A MILLIONAIRE. NINE AND A HALF WEEKS: TWO STRANGERS TRY DIFFERENT WAYS OF HAVING SEX.

The lack of internal conflict is somewhat unexpected. It would certainly be more impactful if Nicole had some dilemma whether she should give in to physical desires or remain a faithful wife.

The characters are a bit shallow. We don't know anything about Nicole, Tam, Styles, and Dr. Kareem, apart from each other's profession and physical or sexual details. It would be interesting to know a little more about each one, their fears, their desires, their wishes. Styles could be built more a la Christian Grey. A very sexually active man, but at the same time, he has a past that has shaped his character that way. Even in more adult movies, it's interesting to get a little deeper into the characters' minds, to understand how they feel and react in some situations.

It is not. It would need more depth, character development, conflict formulation to reach that level.

The story would need a new narrative layer to achieve a desired effect: love, romance. The characters are sexually attracted to each other and indulge in fantasies, but there is no visible feeling during the narrative. Nicole is attracted to her neighbor but feels nothing for him. She claims to love Dr. Kareem, but feels nothing while constantly betraying him. Tam and Nicole are best friends, but that doesn't stop Tam from deciding to have sex with her friend's husband. Dr. Kareem seems very much in love with his wife but ends up cheating on Nicole without any significant dilemmas. The narrative would need an extra layer of genuine feelings such as friendship and love, which would generate personal conflicts. The dialogues need to be fully developed. Some dialogues even take the place of actions. For example, when Styles describe in conversation what we see in the scene. It doesn't make much sense for someone to say: "you're massaging my chest." This sentence should go into action description, even in books. We also need to know more about the characters to really care about them. In "Fifty Shades of Grey," the book also features detailed sex scenes, but there's a whole romance building around that. There are conflicts going on in basically every scene. Gray has a backstory that makes him more empathetic. "Nymphomaniac" is also an example of that. There are numerous explicit sex scenes, but the film has latent conflict, dilemmas, plot points. Even in adult films, this narrative layer is necessary.