Angelic Messenger A Man's Quest to Become an Angel of God 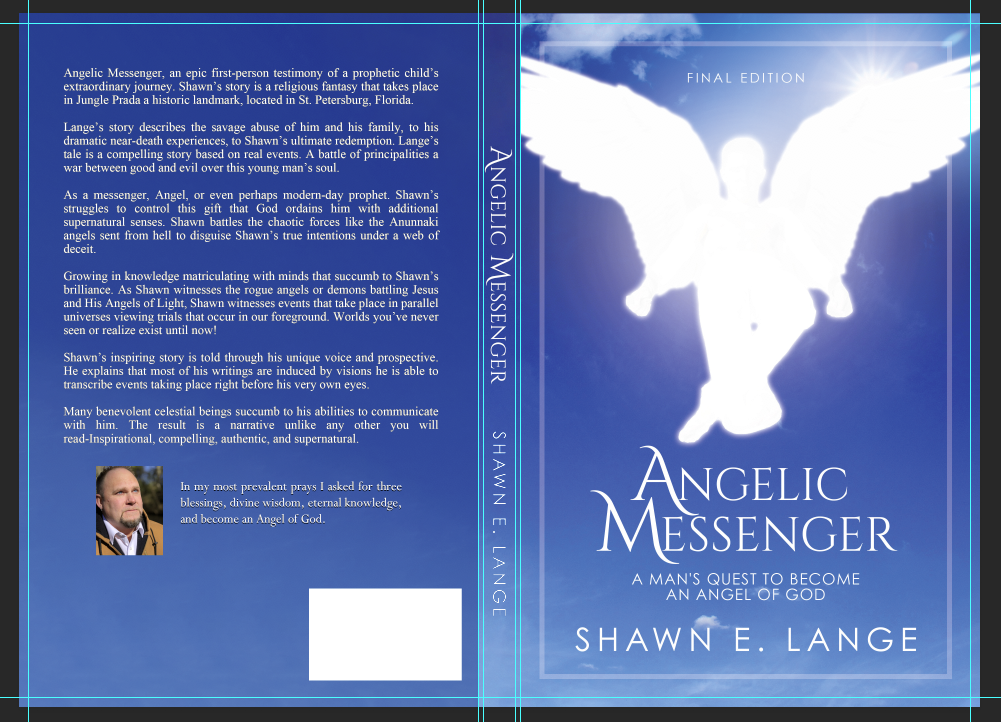 About a child with supernatural senses that view parallel universes. The child maybe a modern day prophet or an Angel of God, at the very least a disciple of Christ our Lord. We still have time as Shawn explains his patent for subatomic nuclear fusion, the antichrist has yet to be risen for ashes.

During the time of unrest and uncertainty this child's family brought from out of darkness, the plot to destroy all that gave Shawn hope. Jesus Christ communicates with him using telepathy giving to him messages from Heaven about hell regarding the apocalypse.


An Angel's Message precludes the prophecies of an Apocalyptic Son. Breaking down biblical verses to explain how the battle of principalities was won. Shawn explains how the timeline of the rise of Satan spawn is based upon our ignorance, prolonging that event with the evolution of mankind.

Angelic Messenger, an epic first-person testimony of a prophetic child’s extraordinary journey. Shawn’s story is a religious fantasy that takes place in Jungle Prada a historic landmark, located in St. Petersburg, Florida. Lange’s story describes the savage abuse of him and his family, to his dramatic near-death experiences, to Shawn’s ultimate redemption. Lange’s tale is a compelling story based on real events. A battle of principalities a war between good and evil over this young man’s soul. As a messenger, Angel, or even perhaps modern-day prophet. Shawn’s struggles to control this gift that God ordains him with additional supernatural senses. Shawn battles the chaotic forces like the Anunnaki angels sent from hell to disguise Shawn’s true intentions under a web of deceit. Growing in knowledge matriculating with minds that succumb to Shawn’s brilliance. As Shawn witnesses the rogue angels or demons battling Jesus and His Angels of Light, Shawn witnesses’ events that take place in parallel universes viewing trials that occur in our foreground. Worlds you’ve never seen or realize exist until now! Shawn’s inspiring story is told through his unique voice and prospective. He explains that most of his writings are induced by visions he is able to transcribe events taking place right before his very own eyes. Many benevolent celestial beings succumb to his abilities to communicate with him. The result is a narrative unlike any other you will read-Inspirational, compelling,

Shawn Lange was born in Jungle Prada located in Saint Petersburg, Florida. He was plagued by an ominous presence that coveted his demise. Shawn fought through strange and unforeseen forces that was attracted to steal Shawn's soul.

Shawn was abused by his father and stepfather during childhood. The negligent way he was treated led Shawn to get a vision problem and a head injury. According to Shawn himself, these problems were a godsend to make him see what other humans cannot see.

No, the author entered the same character twice and could use the segment to add more secondary characters.

The book's beginning is quite attractive, as it starts by defining the hostile environment in which Shawn was born. He tells the story from moments that precede his birth and the violent way in which his father treated his mother. It is a story that begins excitingly and engagingly.

The first part where Shawn was still getting in touch with this extrasensory universe is intriguing. The author presents the problematic events that he went through in his life and gradually introduces the idea of a supernatural environment in which he enters. However, when we already understand that he entered this "divine" universe, the story loses strength.

The hook is the parallel universe created, by divine force or by Shawn's own head, after trauma. Was it a way for Shawn's mind to be able to give a positive explanation to all the violence he went through or was it really a supernatural event? In both layers, the hook is somewhat exciting.

The book's content is entirely religious, so a Christian audience who believes in angels and supernatural forces would be more easily attracted.

If the plot was based on the parallel universes created by a boy's post-traumatic mind, I believe so. Shawn tells his own story, so he believes in the supernatural powers given to him through these traumas, but to reach a wider audience and win Awards, another narrative layer - the mind that escapes from its own universe to recreate less traumatic ones - would be needed.

HEAVEN IS FOR REAL: A BOY TELLS HIS FATHER THAT HE VISITED HEAVEN AND SAW ANGELS DURING HIS APPENDICITIS SURGERY. FIELD OF DREAMS: A FARMER IN IOWA STARTS TO HEAR VOICES ARE COMING FROM HIS CORNFIELD ASKING HIM TO BUILD A BASEBALL FIELD. IN IT, DEAD BASEBALL IDOLS RETURN TO PLAY.

The unique part is that even with God's guidance, Shawn ends up falling into earthly temptations, using drugs, and distancing himself from his children. It brings a more humanized look to this supernatural tale. The closer to the real world, the more interesting the story gets.

Shawn is likable, despite his own weaknesses. As we have followed his story since his birth, we are able to understand what led him to leave the "right" trail and fall into temptations. The violent father and the passive mother make sense for that period.

It is a story that borders on the absurdity that comes from a man's mind traumatized in childhood, and it has its narrative value for that, but it is not a rare gem. In order to improve the content and reach a larger audience, these parallel universes could be deepened, further explored.

There is a solid segment of religious films, and it is interesting to see that the author walked towards this way. However, Shawn's story gives room to a second (or even first) narrative layer that shows that these visions of parallel universes and angelic beings could also result from the traumas suffered by little Shawn. As the story is told by Shawn himself, we have a chance to understand how he observes his own story and the dramas he went through, including the reasons he found for a loss of vision and head trauma. According to Shawn, these events were a way for God to give him glimpses of universes and future facts that other humans cannot see. However, we cannot ignore that traumatic events can generate new universes' perceptions as an escape from reality. Adding a second layer to the story would not aim to take away the credibility of what Shawn believes, but to present other possibilities for the story, thus including a larger audience. One part of the viewers would attribute the visions to a divine force, while the other would attribute these visions to a post-traumatic psychological outcome. And both interpretations are valid as long as the narrative allows this personal interpretation by the audience. The story could thus gain more visibility, more audience range, and more complexity. Shawn's character is well developed, but the rest of the characters could also receive more attention. His father is credible, but he seems only violent. The mother is credible, but she just sounds loving and passive, with a single act of courage in the middle. Deepening the characteristics of secondary characters makes the main one look more authentic as well. The first part of the book and the second one seem quite different. The second part reports Shawn's journey at a time when he already accepted that he was chosen by God, receives divine messages, and seeks to spread these messages. The first part seems more attractive as an audiovisual product due to its potency of events (traumas, abuse, drug addiction, and human relations). It is a powerful memoir, but it needs to find its structural bases, goals and develop better secondary characters to have more chances of being considered.