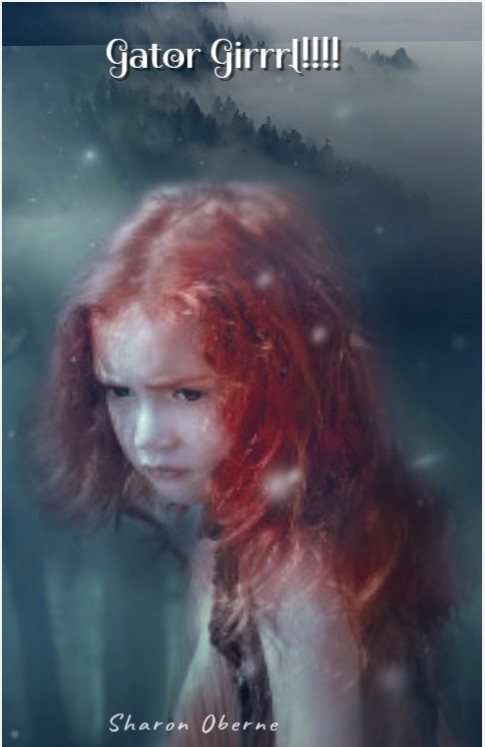 Lexie's mother was struck by lightning while giving birth to Lexie. Everyone thought that's why Lexie was different. But lightning had nothing to do with Lexie being different, nothing at all!

On a lonely stretch of road, during a thunderstorm,Al and Hannah are fixing a flat tire. Hannah, pregnant, goes into labor falling into a ditch. She's struck by lightning and Al believes she's dead. Al takes the infant home, only to discover she is already crawling.


Lexie and her shapeshifter (reptilian) lover, Smelly, Jr. have returned home to stay, after having an horrendous experience in what it means to be different and that family is family no matter what.

Gator Girrrl!!!! has been described as, "unlike anything one has ever read before." For it takes the reader on a journey with Lexie, part human/part Reptilian, who must accept being different. Lexie is raised on a Gator Farm owned by Uncle Bob. Besides killing snakes and taming the alligators, whom she considers her friends, Lexie is taken from her mother as a child and reared by The Woman. The Woman is a Reptilian shapeshifter, with magical powers, and is the sister of Lexie’s real father, Blue Eyes. Blue Eyes does his best to manipulate Lexie into becoming a special warrior, since she has inherited, “the power of light.” Lexie, along with Smelly, Jr., (The Woman’s son), returns to the Gator Farm, discovering her mother, Hannah, was murdered, and some creature has taken over her body. Lexie shows her skills as a warrior when she uses her ball of light to destroy the wicked creature, much to the satisfaction of Blue Eyes. Determined not to become a warrior, nor to allow Blue Eyes to train Smelly, Jr., Lexie leaves on a quest to find a special ring and hopes that this ring will give her the inner strength that she needs to succeed in the life she must accept. But, once she finds the ring, a door opens and Lexie falls into it with a host of other odd characters she must either befriend or confront, with Blue Eyes doing his best to control her. It’s having these experiences that helps Lexie to confront her father and to live her life with Smelly, Jr., her lover.

Mrs. Oberne has had a strong interest in writing science fiction/fantasy stories since the age of six. Before her retirement from teaching, Sharon wrote six-book, chapter series (Alien Bleepers) for AroBookPublishing, working with the renown, Bob Reese. Besides writing, Mrs. Oberne is the creator for TopstheMonkey educational resources.

Lexie's mother was struck by lightning as she gave birth to her in a ditch. She was crawling by the end of the day and her parents knew she was special. She had the gift of light, given by her real father, Blue Eyes, a being in the swamp. She grows up encounter the many magical creatures that live in the Everglades swamp.

The story starts with a mystery surrounding Lexie's birth. Her mother, Hannah, sees a man with glowing, blue eyes as they are changing the car tire. She is struck by lightening and presumed dead after she gave birth in a ditch. Lexie is crawling hours after her birth and they find her mother alive on the side of the road when they come to recover her body. There is a fantasy element being teased and it peaks the readers interest.

The story rambles without much of distinct plot. Lexie is special, she is tied to the magic of the swamps. She is learning about the creatures and history of the swamp. There is some magic, time travel and alternate universes. The story jumps around to many different ideas and it is not consistent. The dialogue is too on the nose and explanatory, leaving no room for mystery or revelations.

The hook is that Lexie is an unusual child after being born under unusual circumstances. Her true lineage makes her a child of the swamp and all it's magic and mystery. I would watch the movie to see the unique ideology tied with the Everglades. There aren't many stories surrounding this part of the world especially including magic and lore.

This would not have a large fanbase as is. There isn't a tangible plot and needs a central ideology. There are too many unique elements being introduced without fulling flushing out the previous idea.

This does not have awards potential. There is little character distinction or development and the plot structure is inconsistent.

FATE: THE WINX SAGA, THE PRINCESS AND THE FROG, GRIMM, HIS DARK MATERIALS

The story is original because of the setting in the Everglade swamps. There is a hidden world of fairies and magical creatures that do not appear to the human eyes.

The lead character is a strong female character. She isn't developed with as much depth as she could. As a reader, I didn't feel that I understood her as a person as I could.

This is not a rare gem but it has some unique elements that make it entertaining. There needs to be a clear and distinct plot especially as a fantasy story. The adventure and events that Lexie goes through feels random and aimless instead of being apart of grander situation.

The story needs a consistent theme and plot. Many different events happen to Lexie and she is shown from being a newborn to a teenager. The consistent theme is the swamp but the characters are not really working towards anything. There are resolutions to certain circumstances but not an overall resolution to the story.