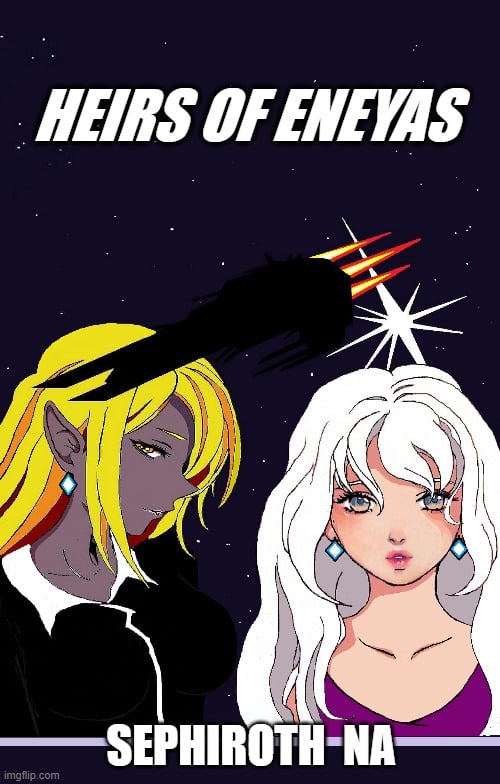 Earth's old gods are back and this time they mean war! But something much more sinister lies beyond as Zen and Sefira ally themselves with a team of hotshot pilots whose sole duty is to defend Earth at all costs!

As we are introduced to the progenitors of the ancient universe, a curse is carried forward to a war that breaks over Earth in what is referred to as the Darkening. Ash and fire consume our planet until Humanity is joined by unsuspecting allies from another world.


While the lead character finds love in someone who isn't human, a war that has recently cost the lives of friends and loved ones alike comes to a brutal and climactic end where the story's true villains emerge, having manipulated everyone from behind the scenes.

An event historically referred to as the Darkening eclipsed the Earth in fire and ash as the invading forces of Exodus scoured Humanity for their prize; an ancient relic which seats power to its heir. A young boy: Isaac, carries a wound from the darkening which slowly infects his body, transforming him into something other than himself. Subtle at first, it allows him to pilot and control the enemy's technology. A team of hotshot pilots join Isaac in a crusade to push the enemy back from Earth. Aliens from another world rally to Earth's defenses, but their intentions are far from benign, aiming only to take Earth for themselves and their own agendas. Caught up in a war between two ancient worlds, the future of humanity rests on the collective efforts of Isaac and his crewmates along with a pair of Protectorate Soldiers, Zen and Sefira, who become disillusioned to their Empire's cold agenda. Zen warms up to her human counterparts and even takes special interest in Isaac. But Sefira is reluctant as she finds humans ultimately unreliable. Allies are betrayed as enemies switch sides in a showdown that rends truth from bone, all in a climactic struggle that reveals the true villains are those playing both sides from behind the scenes. This story could be made into a movie or tv series as it relates several character types in a dramatic and constantly revolving plot where both emotional and spiritual identity is just as much in conflict as cultural and physical differences.

Sephiroth is a 39 year-old Army Veteran with tours of duty in Iraq, Afghanistan, and Korea. Having grown up in Alaska, his ambition towards adventure has led him climbing mountains, searching forests, and sailing frigid arctic waters. Working on his Masters degree in Human services, Sephiroth's next frontier is delving further into the rich cultures of the human dynamic abroad. Currently he resides in Texas with his two daughters and serves in the Texas National Guard.