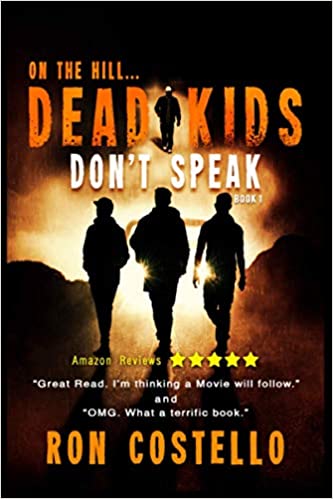 Four boys picking cherries from a neighbor's tree witness a double homicide. It was a mob hit. The boys run and spend their days hiding from the mob and police.

Four boys at night steal cherries in a yard and witness a double homicide, They run but the mob sees them. The cops investigate the murders and find clues. Then know the boys are from the Hill neighborhood.


The mob and the police close in on the boys and, with the boys in the middle, they shoot it out.

The story is a throwback to the Sixties when kids spent their days outdoors and not at the computer. They built forts, hunted, and fished in the Schuylkill, tormented the police — they stole lead from a police shooting range and melted it down to make sinkers for fishing (much of it is true because the author was one of the kids). There's so much in the book about how these kids grew up and learned to hide and defend themselves. These kids had balls and smarts fighting in their back yard, whether it was the city streets or the woods. They had friends on the Hill who organized and rose up to help them, with nicknames like Dirty Neck, Wash My Hands, Jerk Off, Stinky, the Howler, the Ground Crew, Jo-Jo Apeshits, Mumbles, and Fuggie. It's a time when the mob was dangerous and aggressive and "didn't take shit from nobody." Johnny Sausage, Cockeyed Lou, Crazy Phil 'Bomb Bomb,' Dominic 'the Hunchback," and this great character Tommy Sneakers. Also, the Badger, a crazy hitman from Italy who came to help the Philly mob but flipped and helped the kids. The police, detectives Tommy Lochran and Butch Frost, who grew up on the Hill and tracked the kids like a hound dog because they had experienced the same way of life. The book is fiction, sure, but many of the experiences and way of life are true. You will fall in love with this book as would television viewers. There are so many parts to it it'd be perfect as a television series.

After retiring from Drexel University, Ron Costello began a series of books entitled, 'On the Hill." He lives with his wife Denise and three cats in South Philadelphia and writes every day. He has published two books in the series and two more are on the way.