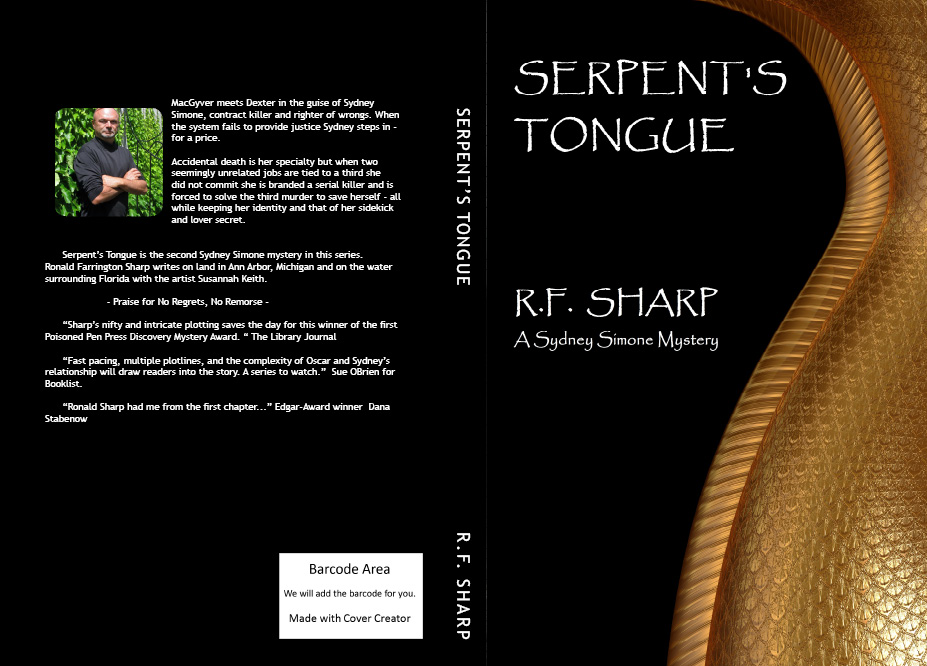 MacGyver meets Dexter in the guise of Sydney Simone. When the system fails, Sydney provides justice--for a price. The first two killings were commissioned by a snake-handling pedophile preacher; but the third was his and Sydney is on the hook for it. It's fight or flight and Sydney never flees.

The call for a hit on Earl the Cannibal was a public service. A week later Sydney kills a notorious con-man. She returns to her gallery job and discovers she is being framed for a third killing she did not commit. Someone is trying to make her out as a serial killer to cover their own killing.


Sydney infiltrates the church of Pastor Luke, a snake handling pedophile who was trying to frame her for a boy he had killed. She confronts him with proof he is the killer--he panics, holding a rattler as he denies everything. But Sydney had already switched the anti-venom he had expected. He dies.

The call for a contract hit on Earl the Cannibal came through Sydney’s website, HumanPestControl.com. Taking out Earl, a child killer who has been wrongfully acquitted of horrific crimes is almost a public service. But that wasn’t the end. A week later she is called upon to eliminate a notorious con-man. Both hits fit her standards of bringing justice to those whom the system has failed. Her killing method of choice is accidental death, and the authorities buy that explanation—at first. Sydney thinks her work is done and settles back into her routine, running the Rose Madder Gallery with her partner Oscar and taking on a new hobby. But her life is soon turned upside down. The press ties both killings to a third murder, not hers, and a police task force is created to track down what they call the Bible-Rose serial killer. Sydney is being framed. Her investigation reveals that the contracts were taken out by Pastor Luke Anger, a snake-handling revivalist preacher whose vice is child molestation. Convinced that Pastor Luke is using her as a serial-killer surrogate to cover up his own crimes, Sydney and Oscar are forced to solve the third killing and eliminate any ties to themselves in order to keep the task force off their backs. They infiltrate the church, put themselves in even deeper trouble and are forced to solve yet another murder to save themselves.

Serpent's Tongue is the second Sydney Simone mystery. The first, No Regrets, No Remorse, won the Poisoned Pen Press Discover Mystery Award. A retired attorney, the author has published a series of legal self help books and is an award winning sculptor.