A Time to Dance A Time to Run 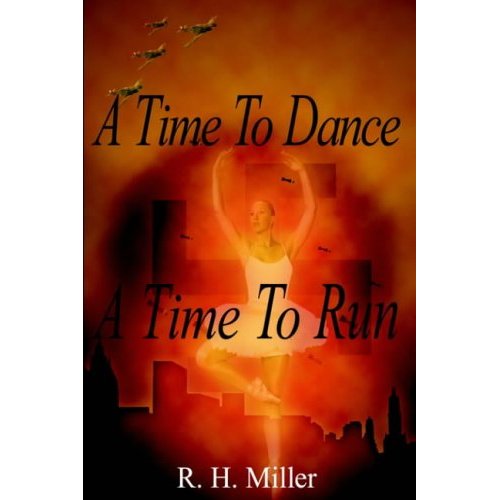 Maria attempts to build a career as a ballet-meister in Nazi Germany. As she moves to different cities, the war, as if it were almost consciously trying to stop her, thwarts her ambition and desire to develop a successful career.

Maria remembers the first bombing raid she experienced in Wuppertal , Germany amid incredible confusion and terror. When it is over, Franz the first violinist with the orchestra wants her and some other ballerinas to help him rescue his violin in the theater. On the way through the burning stree


After a tearful good-bye, Maria boards a plane on Christmas eve with her son to come to her new home and her G.I. officer in Ohio. On the drive to the airport she recalls her ambitions and trials to become a renowned ballet-meister, and tearfully takes one last look at at a destroyed country.

Name: Anna Maria's mother who is with her through most of the book.

Maria was a famous Prima Ballerina in Hitler’s Nazi Germany. Never a Nazi, she was a woman ahead of her time in pursuing a difficult career. The war thwarted her ambition from the start. Dedicated to rigorous practice and development of her choreographic skills; admired and beloved by her peers for her skill and her sense of humor, she was breathtaking and graceful on stage. Her career began in Frankfurt. As a professional choice, she then appeared in smaller cities to develop more readily available promotions to ballet meister-choreographer and prima ballerina. The war, however, hunted her from theater to theater, city to city as utter destruction by the allied bombings spread. The war kept pressing her nearer to Berlin. During these rough times, another of the many problems she had to deal with was suiters which caused problems. She was drafted by Goebbels to be in the Elite Corps of Entertainers After being interviewed and because she had never joined the Nazis so she planned her escape. After a tumultuous departure from Berlin during an air raid, she made her way to the Black Forest where she hid and worked with a Jewish movie star, Edith, in a watch factory converted to a munition’s facility until the end of the war. Later, being confined for weeks in the French occupation zone where she was shot at, and harassed, she made her way back to Frankfurt where she was uniquely qualified to put together a troupe of entertainers made up of a few unemployed dancers

Maria is tapped for the theater to dance ballet in Germany. The Nazis and the war are growing ,changing the lives of it's citizen. Maria's successful career in ballet is interrupted by bombing as Germany loses. Maria's home is destroyed but she finds love with an American solider, leaving her homeland behind to start anew with him.

The story focuses on Germany people at the height of Hitler and beginning of World War II. They are not Nazi supporters and are trying to live normal lives regardless of the war. This gives an interesting perspective of the lives and culture of Germany at the time.

The story is well written and appealing story. There were no elements that made me want to put it down.

The hook is that Maria is living successfully as a ballet dancer in Germany when WWII breaks out and forces her out of the theater. I would watch this movie for the perspective of normal German people who did not support the Nazi agenda, trying to survive and live there lives.

This could have a decent fanbase. The main focus does become WWII which is not the most popular theme. The story is very interesting, showing a different perspective of German people at the time. Other films such as Jojo Rabbit were very successful with similar objectives.

This could have awards potential as many films about surviving wars tend to draw awards notice. The main character is a woman following her life as a ballet dancer until her world changes, does tap into the desire for strong , independent female led films.

The story is original because it follows an independent German woman with a successful career in Nazi Germany. She doesn't have a male rescuer or have an epic love story until the very end. It's about her journey.

The lead character stands out because she is an independent, single woman. She has a successful career as a ballet dancer until the war stops it. Maria is not an alpha female but is strong in a realistic and relatable sense. She preservers with bombs dropping, the loss of her home and career and near rape.

This is not a rare gem but a well written story with a strong female lead. It shows the German people in a different light explaining there struggles in Nazi Germany as German citizens.

This is a recommend because it is a well written story that has many elements that audiences are looking for. Recently, there have been successful movies that show a unique perspective on German people at the height of Hitler. This would do the same. It is entertaining while showing an independent woman during the 1930's and 1940's. There are many great moments with Maria, surviving and creating a new life for herself.