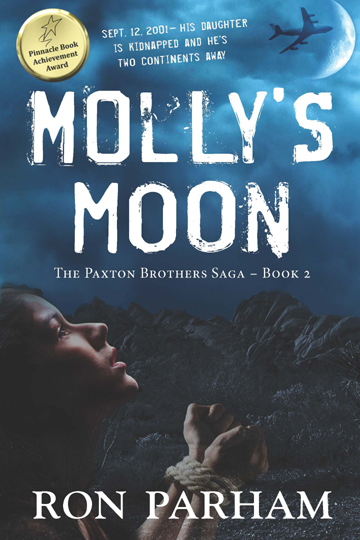 Ethan Paxton is stuck in the Netherlands when the World Trade Center catastrophe happens on 9-11-2001. He learns that his 16-year old daughter, Molly, is kidnapped in Mexico while at a school home building trip. He has to find a way to save her while he is six thousand miles away, with no way home.

On a routine business trip to Europe, recent widower Ethan Paxton learns of the terrorist attacks on the World Trade Center and Pentagon while landing in Amsterdam on September 11, 2001, and finds out that his teenage daughter has been kidnapped in Mexico while on a school home-building trip.


Ethan Paxton arrives in Tijuana, Mexico, just as his daughter and her two friends were paraded in front of the crowd of people at the San Ysidro border crossing, bombs strapped to their young bodies. Jake Delgado and his team find a way to kill Angel Rojas before they are blown up.

Molly's Moon is a story about a father desperate to get from Europe to Mexico during the 9/11 crisis in order to save his teenage daughter, who has been kidnapped by a crazed Mexican drug dealer. He enlists the help of an old friend from his military days, a private investigator In San Diego. The story is written from multiple points of view, as the action is taking place in Europe, Tijuana, San Diego and points in-between. It culminates in a thrilling, slam-bam finale at the Tijuana border crossing when all the characters converge. The action is constant, the emotions run high, the twists and turns are numerous, and the readers all said "I couldn't put the book down!" and "this should be a movie!". It is written almost like a screenplay, with lots of dialogue and action, with colorful characters throughout the novel. Much of what happens in the book actually happened to the author, with the exception of the kidnapping. This will have a movie audience screaming, crying, clapping and moaning - guaranteed.

Ron Parham writes thrillers about ordinary people caught up in extraordinary circumstances. He has four (4) thrillers available on Amazon.com and other sites. He began writing the day after he retired from the high tech industry in 2011, and is now working on his fifth thriller, a sequel to his very popular Copperhead Cove. The common reaction to Ron’s thrillers are “I couldn’t put it down”, and “it had so many twists and surprises”, and “he has well-developed characters and writes with a dry wit and sense of humor”. Ron lives and writes in the Puget Sound area of northwest Washington, where he lives with his son and daughter-in-law and grandchild, Maverik. You can find out more information and sign up for his monthly newsletter at www.ronparham.com.