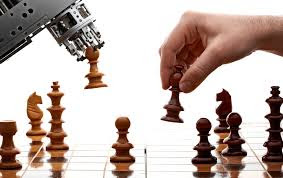 In 2055 the title of World Chess Champion has been held by Artificial Intelligences for 30 years. Out of nowhere a young challenger appears, defeating powerful AIs in China, India, and the U.S. 2 machines stand between him and the title--but will he live long enough to wrest the title from them?

Victor Leventon, 25, has burst on the chess scene, defeating several AIs with ease. To claim the world title he must defeat the top 2 AIs in the world, Russia's ARAKHNA and the Swiss mystery machine FORT. Strange forces align against him--for more is at stake than the mastery of an ancient game.


Victor defeats ARAKHNA from a remote beach house in Kitty Hawk. With his new allies--a Nobel Prize winning scientist, an Indonesian chess master, and his deadly bodyguard/lover, he must next prepare to battle the strange, omniscient Swiss AI FORT.

I see this story as a mini-series. It's wide ranging, from the Eastern U.S. to Germany, Switzerland, France, and Russia. It depicts the world of the near future (2055), where everyone knows and uses the universal knowledge, entertainment, and resource network called "Your/World." Your/World combines what we now now as the Internet, all TV, films, libraries, news, etc. Access is universal and usually instantaneous. Into this vibrantly connected world comes Victor Leventon, raised in a backward commune but possessing the greatest analytical mind of his generation. In his case, he can see the progress of chess moves farther than anyone, even the very powerful artificial intelligences of his day. Not everyone admires his gift, and as he approaches ultimate success by defeating the most capable AIs in the world, plots to stop him grow increasingly deadly, affecting not only Victor but everyone close to him. The world at large does not see the danger--for if Victor loses, either his life or at chess, the world will never be the same. What may be lost may never be found again.

Paul B. Thompson has been a freelance writer since 1989. He's published 29 books, plus TV scripts, short stories, and many articles both in print and online. With Tonya Cook, he wrote a dozen titles in the best selling "Dragonlance" series, along with science fiction, fantasy, and historical novels.