Far On The Ringing Plains 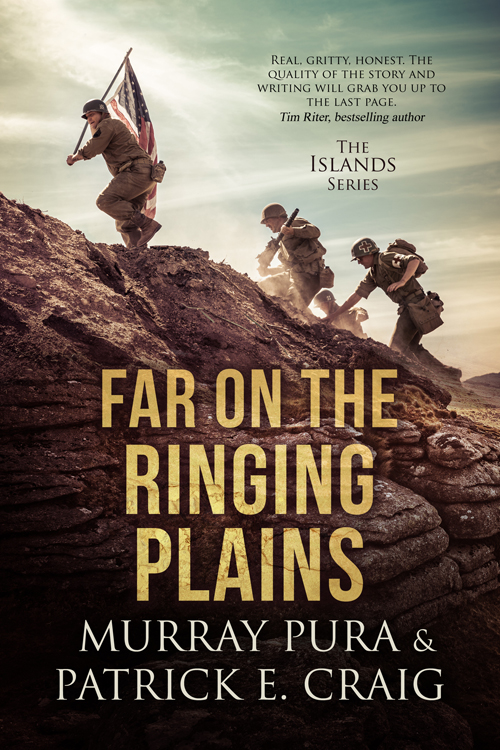 Bud Parmalee, Johnny Strange, Billy Martens—three men that had each other’s backs and the backs of every Marine in their company and platoon. All three were raised never to fight. All three saw no other choice but to enlist and try to make a difference. All three would never be the same again. Never

Three young pacifist men who for different reasons, enlist in the Marines after Pearl Harbor. They meet in basic training and because of their similar faith backgrounds, become best friends. This book follows them through the horrors of battle on Gudalcanal.


The young men, now hardened warriors, survive the battle and live to go on to more bloody battles in the second and thrid books of the series.

Far On The Ringing Plains INSPIRED BY TRUE events. In the spirit of The Thin Red Line, Hacksaw Ridge, Flags of our Fathers and Pearl Harbor.Realistic. Gritty. Gutsy. Without taking it too far, Craig and Pura take it far enough to bring war home to your heart, mind, and soul. The rough edge of combat is here. And the rough edge of language, human passion, and our flawed humanity. If you can handle the ruggedness and honesty of Saving Private Ryan, 1917 or Dunkirk, you can handle the power and authenticity of ISLANDS: Far on the Ringing Plains.For the beauty and the honor is here too. Just like the Bible, in all its roughness and realism and truthfulness about life, reaching out for God is ever-present in ISLANDS. So are hope and faith and self-sacrifice. Prayer. Christ. Courage. An indomitable spirit. And the best of human nature, triumphing over the worst.

Murray Andrew Pura was born in Winnipeg, Manitoba, Canada, and has traveled extensively throughout Canada, the United States, Europe, Asia, and the Middle East. Ordained as a Baptist minister in 1986, Pura has served five churches in Canada and headlined numerous speaking engagements in Canada and the United States. He has twenty-five books published, was a contributor to the Life With God Bible, has been a finalist for The Paraclete Fiction Award, The Dartmouth BookAward, and The John Spencer Hill Literary Award, and has beenshortlisted for the prestigious 2010 Kobzar Literary Award of Canada. Patrick E.Craig, is a lifelong writer and musician who left a successful performance career in 1986 to become a pastor. After pastoring, teaching and speaking at seminars in churches on the west coast for many years,he retired in 2007 to concentrate on writing and publishing fiction books. In November 2011, Patrick signed a three-book deal with Harvest House Publishers to publish his Apple Creek Dreams series. His latest books, The Amish Heiress, The Amish Princess, and The Mennonite Queen, and the reprinted Apple Creek Dreams series are published by his own imprint, P&J Publishing, and all have spent time on the "Hot New releases" and "Amazon Best Seller" lists on Amazon. Harlequin Publishing purchased The Amish Heiress for their new Walmart Amish promotion series and that book is now available in Walmart stores across the country. He also recently signed with Elk Lake Publishing to publish his Middle School/YA mystery series, The Adventures of Punkin and Boo. His latest book, Far On The Ringing Plains, co-written with Murray Pura, was released April 15, 2020.

Bud , Johnny and Billy were raised Mennonites in the midwest. They meet during WWII after Pearl Harbor. Like many men who go off to war, they change from the naive, idealistic boys to hardened men who see death and destruction. The men constantly look out for one another until they finally make their way back home.

The story begins with the heartbreaking discovery that Johnny was molested by a elder in his church. He is running from the hypocrisy that he was raised in and goes to create a new life far from his father.

This story focuses on the three men, putting them in a very appealing light. They are heroes, fighting for the country, taking risk and getting out alive. It is a very idealistic, all American story which is one sided and unrealistic. To me more realistic, they could have a meaningful connection with Japanese soldiers. They kill all of the "Japs" for wanting to take over the world. There are more gray areas to this that could be explored. The profile says the men come back changed but there ideals about America are fantasy.

The hook is that three young men meet in WWII, bonding over shared upbringings. They spend there time during the war protecting one another. I would watch this movie for the comradery between the men. Beyond that, it is a typical war film.

This could have a large fanbase as many war movies do. It does, however, feel dated with its' perspective. The men are all American men who believe what they are told, to kill "Japs.” They are apart of the system and thrive in it. There is no nuance to their thought process or their outlook on the world.

This could have awards potential as many other war movies have garnered. The story need to be updated with modern ideas. The sacrifice of serving is always acceptable in film but this story is not unique.

The story is not unique. It is a war movie set during WWII. Three men find common ground and band together to get through the war. This story could be made more unique by having perspectives of the "enemy". The soldiers are in a foreign country and must have more of an effect on them then finding a beautiful woman.

The lead characters stand out because of their faith based connection. They all grew up in a Mennonite community, having many different experiences. Johnny was sexually abused while Billy grew up in an idyllic home making him very devout to the faith. Billy, Johnny and Bud's personality are not very unique, only some of the circumstances they have endured.

This is an average war story. It can be improved by having more grey areas. War seems black and white, but it is not. These men do not question much in relation to the war and there actions. They are dealing with personal issues mainly.

This story needs a fresh perspective. It has an all American outlook on the war and America's position in it. There is little diversity in the story and the men don't gain real perspective about the world. They have seen horrors but what's beyond that. American's were on one side, but it wasn't the right side to the Japanese. That could be explored more. War is not a cut and dry topic which can be delved into here.