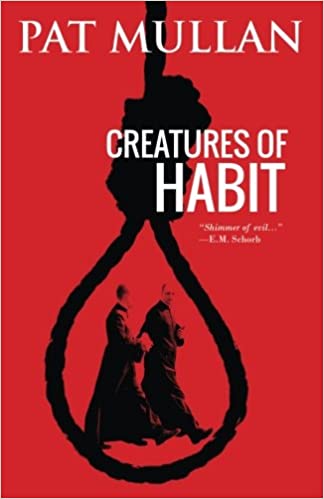 Two boys flee in terror across the grounds of their boarding school, on a night when the rain slices the air like sheets of broken glass and trees bend and groan under gale-force winds. Before midnight one will die, exposing a dark world, centuries old

The two boys, breathless, reached the west corner of the big study hall and flattened themselves against the granite wall. Night had fallen and the wind had reached gale force. Sleety rain sliced the air like sheets of broken glass. The trees bent and groaned.


In total shock, he fell back against the car, unable to defend himself. His attacker moved swiftly, shoving the blade under Father Roland’s rib-cage and forcing it directly upwards into the heart. Father Roland Cormack died on the ground beside his car.

Before midnight Emmet Joyce's son will die, exposing a dark world, centuries old. Emmet rejects the school’s assertion that his son died accidentally. With a Church surrounded by scandal, cover-ups within the Church, and failures to protect children in their care, the priests who run the school no longer command the unquestioning trust of their flock. Emmet trusts only one man to uncover the truth: his cousin, Ed Burke. But Ed is now in Florida, recovering from stress and burn-out in his New York law practice, and a failed attempt to start again in Ireland. Despite his reluctance to return to Ireland, Ed knows that he can’t refuse his family at this time of need. So Ed Burke returns again to find that the Ireland of the twenty-first century is still the Ireland of James Joyce where ‘Christ and Caesar go hand in glove’. His quest for the truth leads him from Galway and Dublin to Boston and Rome, following a trail enmeshed in one family’s desire to occupy the chair of Peter, a desire under threat from that dark world, centuries old. But an avenger stalks the land, one who exacts justice at the end of a rope, one who seeks revenge, not truth. Ed knows that all roads lead to Rome and he also knows that, if he is to uncover what really happened to his cousin’s son, he must protect the guilty.

Pat Mullan's recent work has appeared in the anthology, DUBLIN NOIR, published in the USA by Akashic Books and in Ireland and the UK by Brandon Books and again in ‘City-Pick DUBLIN’, published by Oxygen Books in 2010 to mark Dublin being chosen as UNESCO’S City of Culture for 2010. His first novel, The Circle of Sodom, received two nominations, one for Best First Novel and one for Best Suspense Thriller, at the 2005 Love Is Murder conference in Chicago. His second novel, Blood Red Square, was published in the US in 2005. His latest novels are Last Days of The Tiger, Creatures of Habit and A Deadly Gamble. Most are now available on TaleFlick. He is Ireland Chair of International Thriller Writers, Inc. Visit him at www.patmullan.com

A string of murders at a Catholic school rocks a small community. A young boy’s apparent accident is being investigated and the priest are the prime suspect. A centuries old secret organization of homosexuals is uncovered and detectives try to expose it and its abuse.

No, the book profile does not fully reflect the book. The profile discusses two young boys running for their lives and one dying. That is the event that drives the plot. The two boys are dead within the first chapter. The story focuses around the detectives trying to uncover the real reason the boys died and expose the dark secret of the Catholic priest, and that could be added to the setup description.

The first chapter shows the young boy, Terry, being chased for his phone and terrified of the priest. He is so terrified that he falls to his death trying to escape. That drew me in, and the curiosity to understand how the characters were brought to that moment in time.

At times, the story reads like an older children's book, and the dialogue isn't very cultivated.

The hook is that young boy is found dead from an accidental fall and his roommate is found hanging from a tree. The Catholic church claims it was a accident but some can see the unsavory circumstances surrounding the events.

This could have a large fan base because it is suspenseful and dramatic, and deals with a real issue. Films similar to it have done very well. There is also a rise in exposing injustices and this film does just that.

This could have awards potential if developed more. Films similar to this have had great success, critically. The deaths of the boys gives it more gravitas as well.

As it is now, this story has been done a number of times.

There is nothing about the lead characters that make them stand out at the moment.

The is an average story, considering this subject matter has been done many times before.

If this story maybe dealt with another organization that is not the Catholic Church. It has been done many times before. The structure is still interesting, though.