The Conman ... a Baseball Odyssey 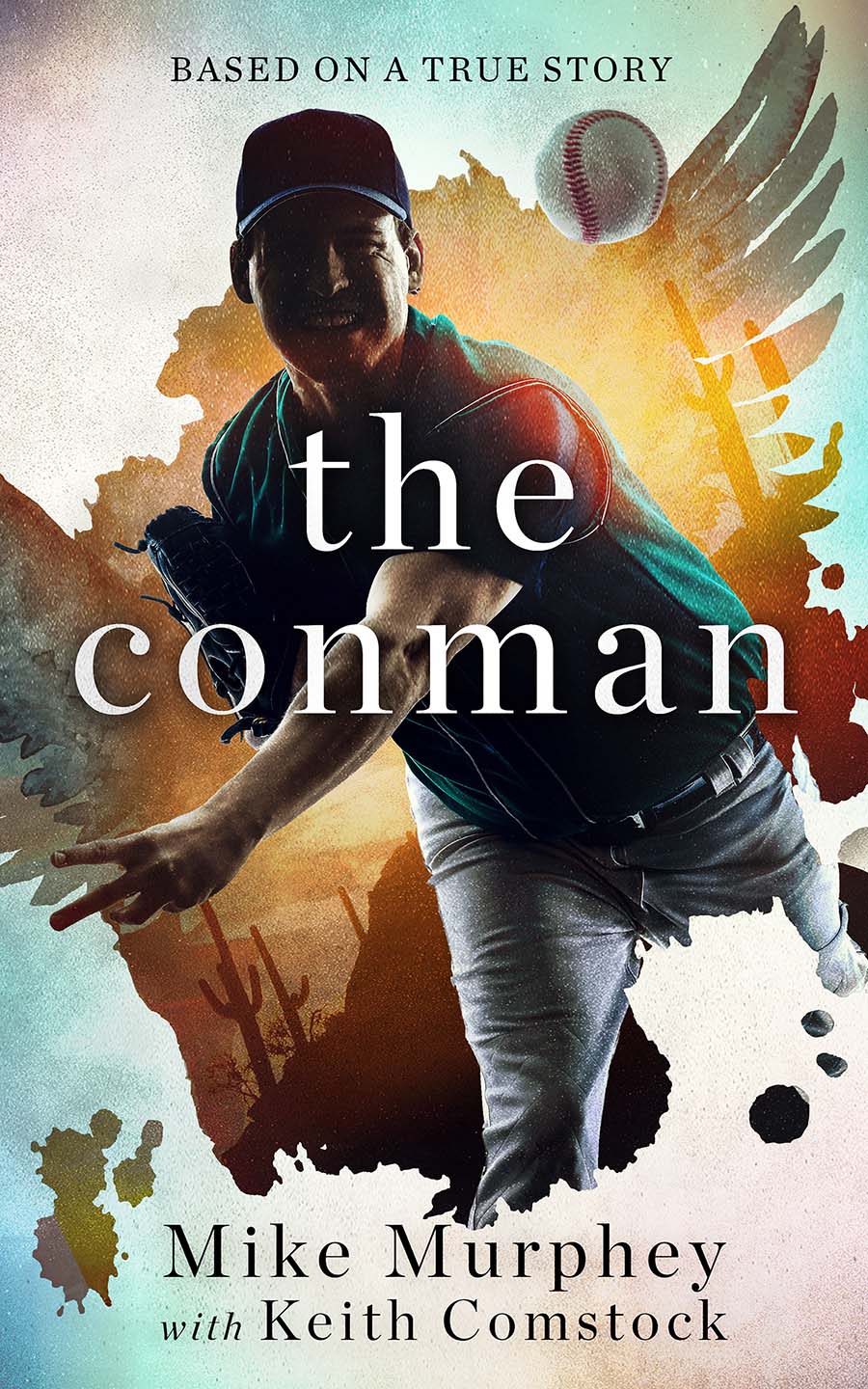 During a 16-year baseball career, Conor Nash avoided the trap of alcohol and drugs. His drug was baseball. And what can an addict do when he realizes he will never be that high again? He climbs Camelback Mountain with a bottle of champagne and seeks an answer: Who is Conor Nash, if he can’t pitch?

Conor Nash, carrying a bottle of champagne, climbs Camelback Mountain in Phoenix to confront his "baseball angel" seeking accountability for a career-ending injury after finally reaching the Major Leagues following 16 years of releases along the way.


Drunk and alone in desert darkness, Conor is confronted by the vision of a best friend who committed suicide. The vision helps Conor realize his anger is driving a wedge by Conor and his wife, Kate, who has been with him every step of his baseball journey.

Age: Follows Conor from seven years old to his 40's

Age: Teenager through her 40's

Age: Teenager through his 40's

The Conman is a funny and poignant story about the price of single-minded purpose. Over a sixteen-year professional baseball career, Conor Nash persevered through failure, disappointment, petty vendettas, betrayal and a crippling psychological malady called the yips. At last, after earning a precious nine months in the Majors when he is a decade too old, he finally confronts an obstacle he cannot overcome. During the months following a career-ending injury, he becomes bitter and withdrawn, threating relationships with his wife and a group of life-long friends who have supported his career through all the peaks and valleys. The story is rich in baseball history and accurately depicts the brutal struggle and petty politics of the minor leagues.

Mike Murphey is a native of eastern New Mexico and spent almost thirty years as an award-winning newspaper journalist in the Southwest and Pacific Northwest. Following his retirement from the newspaper business, he and his wife Nancy entered in a seventeen-year partnership with the late Dave Henderson, all-star centerfielder for the Oakland Athletics, Boston Red Sox and Seattle Mariners. Mike loves fiction, cats, baseball and sailing. He splits his time between Spokane, Washington, and Phoenix, Arizona, where he enjoys life as a writer and old-man baseball player. The Conman is based on the Life of Keith Comstock. Keith pitched professionally for sixteen years, including Major League time with The Seattle Mariners, the San Diego Padres, the San Francisco Giants and the Minnesota Twins. Following his retirement in 1992, Keith has held minor league coaching and managing positions with several organizations. For the past decade he has served as the rehabilitation instructor for the Texas Rangers.

Connor is contemplating his life on a mountain top with an old bottle of champagne. He spent his childhood dreaming of pitching in the major leagues without any thought for a back up plan. Connor goes over his 16 year career, trying to figure out his next move.

The book focuses on baseball to the extinct that would attract a real baseball fan. As someone with a minimal knowledge or interest in the sport, there were many uninteresting parts. The story could have been more condensed. Connor seems to relive every moment of his baseball career as well as personal experiences. The personal experiences serve the story better than all of his sports experiences.

The hook is that Connor is having a "mountain top" moment as his baseball playing career comes to an end. He relives his 16 year career while reconciling the fact that change has come. I would watch this movie for the human aspect. He is a flawed human being who struggles to see himself in a different way.

This could have a large fanbase considering the popularity of American baseball. It does limit itself because the story is so focused on the sport that it might alienate certain audiences.

This could have awards potential. Connor's character faces his inner self which could be played well by a great actor. The plot is not very exciting or unique.

The story is original because it displays Connor Nash's specific experiences. Outside of that, it is much like an sports movie. Sports films have been done many times over, there is not much room left for a unique spin.

The lead character is very relatable. He was not a baseball prodigy. He was good enough and he worked hard at his dreams. Connor is everyone who does the best they can, not giving up on his dreams despite what everyone else told him.

This is an average story. It could be improved by focusing on the personal side of Connor's life. The baseball jargon will be lost on mainstream audiences.

This book is a consider because it is an inspiring story of a normal person reconciling with the choices they've made. Connor went for his dreams to be a pitcher in the major leagues. He has many ups and downs but he stuck with it. Now he must decide who he is now that his identity is changing. He is not a baseball player anymore. What now? It is a very human story but not very different from others already portrayed.