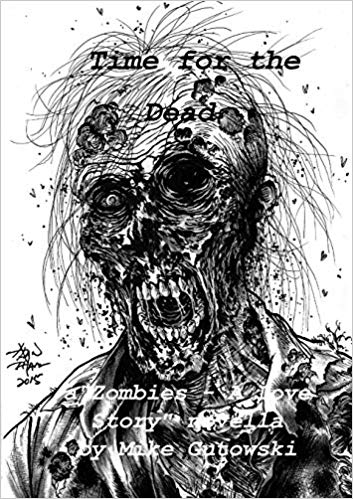 The struggle is real for Witches, Zombies, and Humans in the hundo p crazy West Kansas plains. It had become okay to play with dead things. Just had to be careful. Dead things may bite.

Adam Lincoln, a farmer, died a year ago of circumstances uncertain to him, as he tried to recollect in the darkness of unknown origin. After much reflection, he realizes he is buried. He breaks free into the above-ground world where he is immediately attacked by flying squirrels.


Adam and his friend George Pullman, aided by son Cain, daughter Lilly, and Adam's undead wife Eve and a recruited Zombie army, launch a final assault against Miss Zelda, the matriarch of a conniving Witch coven that has plagued the farmers and towns for decades.

The West Kansas plains had been almost completely overrun and controlled by a powerful Witch coven, headed by Miss Zelda, as revenge for human persecution administered by Meadow City for almost a century. Two stubborn families had yet to yield: the Lincolns and the Pullmans. After the unexpected deaths of Adam Lincoln and his adulterous, drug-addicted wife Eve, murdered by the Witch coven, one year later each rises from the dead. And so begins the effort of the Lincolns and Pullmans to fend off and stop total domination by the Witches. Adam and his best friend, George Pullman, plot the Witch coven demise. Along this path, Adam is arrested for eating some college protestors and their professor protest leader one a food trip to Meadow City with daughter Lilly, a recent law school graduate, and licensed lawyer. Adam's daughter Lilly defends him at the murder trial against Miss Zelda, the City prosecutor, but the only escape from a guilty verdict is to eat the Judge. Aided by Adam's son Cain, a Zombie horde, previously infected by Adam, is unleashed upon the Courthouse to allow Adam and Lilly's escape. Miss Zelda then takes matters into her own hands in a final battle of Witches vs. Zombies on the West Kansas plains.

Adam is shot to death but figures out a way to come back to life a year later thanks to GMO seeds. He and his friend George are the only two families who haven't lost control to the local witches. They recruit more zombies to fight off the witches power. Adam tries to bring back his wife as a zombie but his children remind him how she got him killed in the first place.

The logline is more like a tagline rather than a one or two sentence summary of the story. The tagline is very catchy, but too vague to work as a logline. By explaining Adam's plot in fighting the witches as a zombie the dynamics of the story and the antagonist will be clearer.

At first there is a lot of terror in Adam's confusion before he realizes he is buried and possibly dead but then right after he reemerges he starts eating squirrels as his daughter watches. This breaks the tension in a comedic way as it is wholly unexpected and quirky. It is a striking visual to have zombie squirrels and quite memorable.

How the zombies are created with the GMO seeds makes sense but within the world building what makes zombies remember things, have control or loose control and what makes some more sentient than others remains a bit hazy.

The hook is that GMO zombies must fight witches in Kansas in order to protect their remaining human relations. There are also zombie squirrels and the trial for zombie murder ends in the judge getting eaten.

Depending on if the film follows the comedic horror genre or takes the zombie genre seriously this could have a medium sized audience. The horror comedy would have a larger audience than a supernatural thriller because of the unique visuals and zombie rules of the universe.

Given its supernatural and horror nature this in unlikely to gain awards. It might win popular awards for its comedy but not esteemed awards due to the zombie factor.

SCOUT'S GUIDE TO THE ZOMBIE APOCALYPSE, JOHNNY DIES AT THE END, ZOMBEAVERS, THE ODD FAMILY: ZOMBIE ON SALE, ZOMBIELAND

The comedic use of the zombie and their sentience as well as the GMO angle along with the charm of elderly Kansas farmers create memorable characters and plot moments. Incorporating the witches as dynamic characters and firmer settings about the zombie rules of existence would help make the conflict easier to follow.

Adam is the protagonist but as a zombie he is unpredictable. He does bad things like eating the judge and squirrels which does beyond being an antihero and yet he is still likable and loyal.

This is definitely one of the most creative zombie stories proposed but stronger monster guidelines and less existential dread at the beginning would help eve out the tone and remove plot holes. One such plot hole being that the zombies are explained as wanting only meat and yet Adam wishes to save his wife despite being a Zombie.

By being consistent with zombie behavior, their actions can still be surprising but also logical. Also providing the antagonist witches with deeper internal conflict will help make their villainy more dynamic.