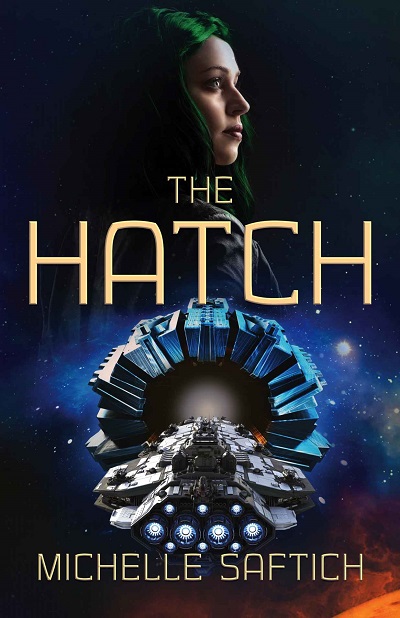 Psychic intern, Britta Tate, leaves Earth in search of her missing brother. She will wield all her senses to navigate conspiracies, corruption and war before stumbling upon the startling truth. If she doesn't find her brother soon, everything and everyone will be lost.

Amelia Tate is with her crew on a spaceship about to make a Hatch jump when she has a psychic insight that their craft will be shot down as soon as they go through the gateway. With seconds to decide, she enters co-ordinates to jump them to the edge of the known universe, where they become stranded.


On board their ship is a weapon needed to stop an asteroid set to strike Earth. Amelia's son goes looking for her but also comes under attack. It is now up to her daughter, Britta Tate to find them and the weapon before it's too late.

Imagine a world in which we have invented the Hatch, a technology which allows for deep space travel and colonisation of other planets. In this world, we need psychics capable of astral travelling to aid in space exploration. Britta Tate is one such psychic. When her brother and mother were sent on missions in space, they never returned. Believing her mother dead, Britta tries to use her gifts to find her brother and teams up with her brother's friend, Cal Granton, to learn what she can. However, she becomes distracted when world leader, Mandon Allic, suddenly announces an offer of free space travel to the masses on Earth. Sceptical about the offer, Britta travels with Cal into space where they soon discover that this sudden mobilisation of people is actually an evacuation. An asteroid is on path to strike Earth and the government had worked to save as many as possible, minus the panic. Britta and Cal arrive on Nattalia, the utopian planet on which her brother was last seen. There, she connects with interdimensional beings, Miras. From them, she telepathically learns that they had given her mother a weapon capable of knocking an asteroid off course. The weapon is still on her mother's ship and what’s more – she and her crew are still alive. Her brother is out there too, or are they? A unique blend of science and psychology, this fast-moving, suspenseful story will entertain!

Author Michelle Saftich was born and raised in Brisbane, Australia. She has three books published and a manuscript currently under submission. Published by Odyssey Books, her debut, historical fiction novel Port of No Return was released on July 31, 2015. Its sequel Wanderers No More was released on August 22, 2017. While a sequel, it can be read as a standalone novel. Odyssey Books published her third futuristic novel The Hatch in December 2019. A sequel, The Fifth Hatch, is currently under submission. Michelle holds a Bachelor of Business/Communications Degree, majoring in journalism, from the Queensland University of Technology. She has worked in communications, including print journalism, sub-editing, communications management and marketing for a not-for-profit. She spent 10 years living and working in Sydney; and two years in Osaka, Japan, where she taught English. She is married with two sons and has a black cat, a black American Cocker Spaniel and two guinea pigs.

Britta Tate trains as a space psychic in order to save her mother and brother from being lost forever. She enlists of the help of higher sentient beings as well as her childhood crush, Cal. Together they accomplish deep space travel in successful missions that not only retrieve her lost family but a threatening, time-sensitive space weapon.

The short summary explains the premise as if Amelia is the protagonist when Britta is the focus. In the character description Amelia is also treated as a main character when her disappearance makes her more of a side character. Focusing the pitch on Britta and changing the description to a more central character will create a balance between the profile and the story about how important Amelia is to the story.

The concept of a using psychic powers to travel space is intriguing. Britta's freedom but also entrapment in EASA is also a compelling dilemma as she owes them her skills' improved power but they keep her from her family for ten years.

Once Cal is reintroduced, the genre becomes far more focused on their relationship rather than Britta as the protagonist. Whereas the space drama was more action beforehand the romance subplot almost becomes a space romance instead when he returns.

The hook is that Britta has to rescue her brother and mother using the same power that got her missing family members in the situation in the first place.

This is likely to have a larger YA fanbase even though Britta is a recent college graduate in her early 20s. This is due the structure of the YA type romance.

This is unlikely to have awards potential as this seems more geared towards a younger audience, but it is not animation so would unlikely be nominated for an adult category.

GRAVITY, TOMORROWLAND, THE SPACE BETWEEN US, SCANNERS, THE FURY, INTERSTELLAR, MEDIUM (TV SERIES)

The originality comes from Britta's psychic abilities making her capable of space travel and connecting her to the past and future. Focusing less of Britta's romance and more on her skills to solve her missing family's location could strengthen her personality as the protagonist rather than make her somewhat generic.

Britta is a rebellious, sentimental and talented psychic. The fact that she can to astral project herself is very uncommon and her control over powers is admirable.

This has really creative world building with some memorable imagery, but it becomes too much about the romance than the original main conflict. Adjusting the focus could help create a narrative that is less conventional.

Minimizing the romance to enhance the tension and create a unified genre could prove helpful to focusing the tone. Quickening the pacing of the training to breakup the exposition could also even out the cadence.