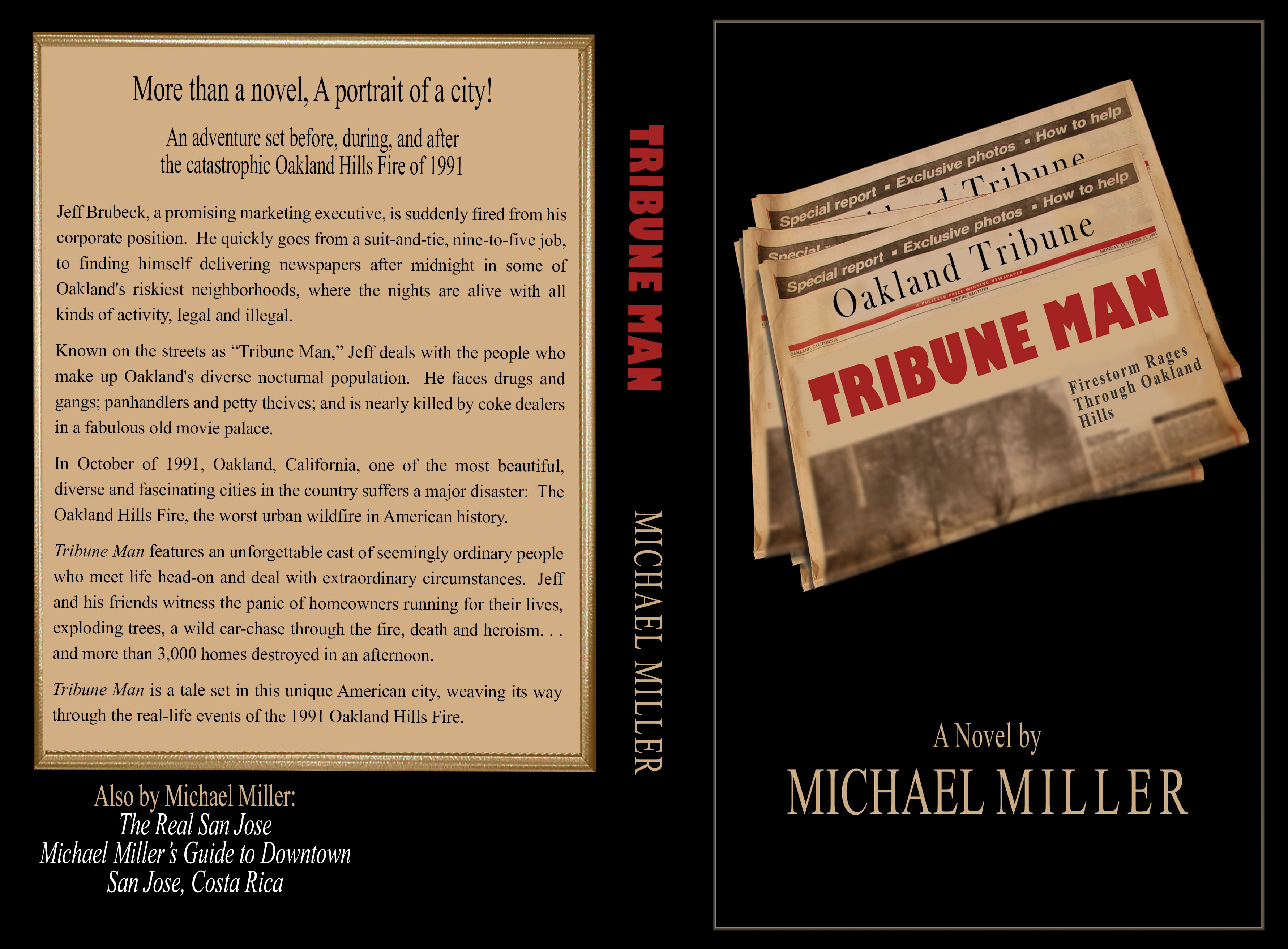 More than a novel, A portrait of a city! An adventure set before, during, and after the catastrophic Oakland Hills Fire of 1991.

Promising marketing executive, Jeff Brubeck is fired from his job. He quickly finds himself delivering newspapers after midnight in some of Oakland's riskiest neighborhoods, where the nights are alive with all kinds of activity, legal and illegal. He faces drugs and gangs and is nearly killed by cok

Oakland, California is one of the beautiful and fascinating cities in the country. It is often under-rated, partly because it is next to San Francisco. The story follows Jeff Brubeck, a promising marketing executive, who is suddenly fired from his corporate position. He quickly goes from a suit-and-tie, nine-to-five job, to finding himself delivering newspapers after midnight in some of Oakland's riskiest neighborhoods, where the nights are alive with all kinds of activity, legal and illegal. Known on the streets as “Tribune Man,” Jeff deals with the people who make up Oakland's diverse nocturnal population. He faces drugs and gangs; panhandlers and petty thieves; and is nearly killed by coke dealers in a fabulous old movie palace. It features an unforgettable cast of seemingly ordinary people who work hard to survive in Oakland and then rise to deal with extraordinary circumstances. In October, 1991, it all comes apart! Oakland suffers a major disaster: The Oakland Hills fire, at the time the worst urban wildfire in American history. Jeff and his friends witness the panic of homeowners running for their lives, exploding trees, a wild car-chase through the fire, death and heroism, and more than 3,000 homes destroyed in a single afternoon. Tribune Man is a “noir-like” tale set in this unique American city, weaving its way through the real-life events of the 1991 Oakland Hills Fire. More than a novel, it is a portrait of a city. And a look at life 30 years ago.

Michael Miller, has over forty years of business experience, primarily in sales and marketing. He worked in the early 1990's for the parent company of the Oakland Tribune as its Marketing Director for Circulation. Now, semi-retired, he has decided to do something important: Write. He grew up in the beautiful Endless Mountains of northern Pennsylvania, and has lived in Honolulu, the San Francisco Bay Area, Southwest Florida and Costa Rica. He lived in The Oakland Hills during the tragic Oakland Hills Fire of 1991. He has travelled extensively in the Far East and Central America. Mr. Miller is the author of the highly acclaimed guide book for Downtown San José, Costa Rica called The Real San José . He also hosts the popular website about downtown San José: TheRealSanJose.com Mr. Miller has served in the United States Navy and is a Vietnam Veteran. He holds a degree in economics. Mr. Miller currently spends his time in San José, Costa Rica and Naples, Florida. Tribune Man is Michael Miller's first novel. Contact: Mr. Miller invites your comments. Use the email address: TheRealSanJose@gmail.com

Jeff is demoted at his job at the newspaper. He ends up embracing his new position and expanding it. His newspaper and vending businesses get entangled with a local drug lord. Jeff finds success until he moves onto other opportunities in his beloved city of Oakland.

Yes, the book profile does accurately reflect the book. The profile, however, is a vague overview of the themes of the book. It alludes to an adventure which doesn't come through.

The story begins with Jeff being told he is being demoted. His fiery response paints a picture of Jeff and his passion for his work.

The story is full of mundane aspects of life. There is little excitement besides the Oakland fires which is a small portion of the story. The fire and his dealing with cocaine dealers should be developed further with less time spent on Jeff's day to day life. While this reads like a biography , not an action movie, it could grab the audience more.

The hook is that Jeff finds his passion for journalism and his business tested by the local drug cartel and development of technology. I would watch the movie to see Jeff's passion for the newspaper business and the perils of entrepreneurship in Oakland.

This could have a large fanbase with the right director. If the story was given more of an edge and the cocaine ring and fire were the main focus of the plot. Jeff's character could be developed stronger.

This does not have awards potential as is. There are not many of elements in the story to draw an audience in. There is too much time spent on Jeff's everyday like. Overall, the story isn't very unique.

The story is not very original outside of the setting. This is a love letter to Oakland, California with the story branching from that. The plot is biographical with moments of intensity. Overall, it's a quiet, simple story.

The lead character stands out because of his passion for his business. He fights for his place in the face of serious obstacles. Jeff stands up against a drug lord who is using his vending machines for drug pickups.

This is not a rare gem. There is not much excitement to enthrall an audience. The story focuses on Jeff's day to day life for too long, not giving enough depth to the dramatic events. Most of the story is about a normal guy experience normal life events.

The story needs to focus on the main plot points and develop them further. The Oakland fire doesn't feel like a personal event for Jeff but something that happened around him. He references it but it didn't affect him greatly. The drug ring using his vending machines has the potential for great drama and should be made the primary plot.