Boy at the Crossroads: From Teenage Runaway to Class President 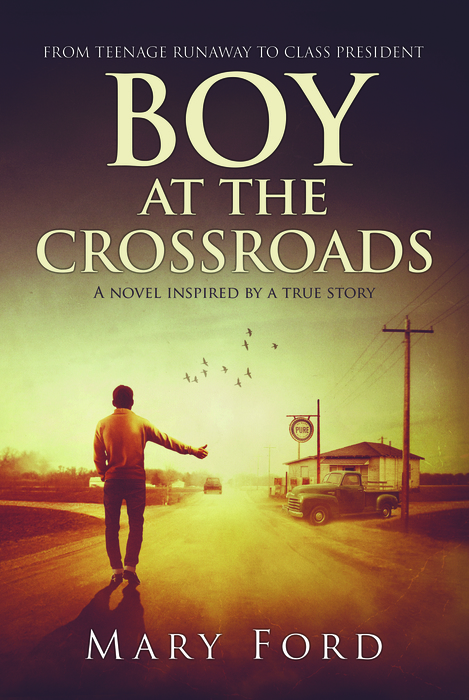 Conley Ford hitched a ride to a different life. Only time would tell if it would be better or worse… If you like heroes overcoming adversity, vividly painted recollections, and stories of resilience, then you’ll love Mary Ford’s engaging tale.

Seeking the wrong kind of excitement, Conley, a restless 13-year-old falls in with a group of older boys joyriding in stolen Mercury cars… until he is arrested and put on probation. With a harsh father waiting and too embarrassed to face his classmates as a jailbird, the impetuous youth leaves town,


An adolescent who grew up impoverished, with minimal affection, still found the strength to follow his gut toward something more. As his journey takes him to New Orleans, Cincinnati, and Chicago, the lost young traveler ends up finding acceptance and hope in the one place he never expected.

He hitched a ride to a different life. Only time would tell if it would be better or worse… Tennessee, 1955. Conley Ford learned quickly the world’s full of hard knocks. Seeking the wrong kind of excitement, the restless thirteen-year-old falls in with a group of older boys joyriding in stolen Mercury cars… until he is arrested and put on probation. With a harsh father waiting and too embarrassed to face his classmates as a jailbird, the impetuous youth leaves town, making it all the way to New Orleans. No stranger to demanding work from the age he was old enough to walk, Conley uses his wits and street smarts to commandeer a hot dog cart and make some cash. But when a turf war and a near-fatal accident sends him back home, the resourceful teen faces a choice between staying in misery or once more striking out into a dangerous world. Can this troubled young man ever find somewhere he can thrive? Inspired by real events and told through cleverly crafted storytelling, Mary Ford depicts an adolescent who grew up impoverished and with minimal affection, but still found the strength to follow his gut toward something more. And as his journey takes him to Cincinnati, Chicago, and other far-flung parts of the United States, a lost little traveler ends up finding acceptance and hope in the one place he never expected.

Mary Ford is a retired, award-winning journalist who spent twenty-eight years as the editor of two local newspapers, the Cohasset Mariner and the Hingham Journal. She met her future husband, Conley, in 1971 and was always fascinated by his story. They live in Scituate with their dog, George. “Boy at the Crossroads” is Mary’s first novel. You can visit her website: maryfordedit.com

Connie grew up in a large family in Tennessee which was abundant in people but not in affection. After being arrested for stealing cars at 13 years old, he embarks on a journey to New Orleans where he gets a job and his own place. He returns to his Tennessee, living out his teenage years doing typical high school experiences. When he finished school, Connie ends up in the Air Force when he finally confronts his feelings about his father and childhood.

The story begins showcasing Connie's interesting childhood. His parents had 16 children in the early half of the 20th century. They were poor and were very tough with their children. Connie was tough because of it and goes out boldly into the world. He begins stealing cars with a friend and gets arrested and tried in court at the age of 13 years old. It's almost inspiring to see a young character living so unapologetically.

The story has some interesting moments, but there are many mundane moments. Connie's high school years are similar to many without any major life events. It could be more condensed. More time could be given to his time outside of high school and his time in the Air Force.

The hook is that 13 year old Connie strikes out on his own after been arrested for a stealing cars. Instead of facing his classmates, he hitchhikes his way to New Orleans and temporary independence. I would watch the movie to see the bold journey of a 13 year old boy. He sets off on an adventure , far from home and makes a life for himself until he is sent home.

This is a quieter story so it would have a smaller audience. There is a lull in the middle of the story that might lose the attention of the audience. Connie's adventure at 13 years old holds the most interesting story and should be the main focus of the story. There is room for non linear storytelling to explore Connie as an adult.

This could have awards potential if more creative and introspective storytelling is used. As is, the story feels average but can be elevated .

Connie's adventure is unique. He is very young , but had the courage to leave his family and see the world. The remainder of the story is the average story of white men of the time period and place.

The lead character, Connie, has a matureness to his youthful outlook. His father was a hard man and no one coddled him which made him independent. Even though Connie got in with the wrong crowd at first, he had a strong work ethic at a young age.

The beginning of this book is unique and interesting but it gets lost in the 2nd half with the average events of Connie's life. He moves back home, finishes high-school, and ends up in the Air Force in his adult life. These are all normal events in a person's life which do not translate as exciting on screen.

There are some interesting and exciting parts of the story that should become the main focus. Connie's adventures hitchhiking to New Orleans gives the most unique story considering how young he was and how bold he was in his choices. His adventure at that age and with his Southern background would offer a charm to the all American story of a 13 year old boy making his way in the world in the 1950's.