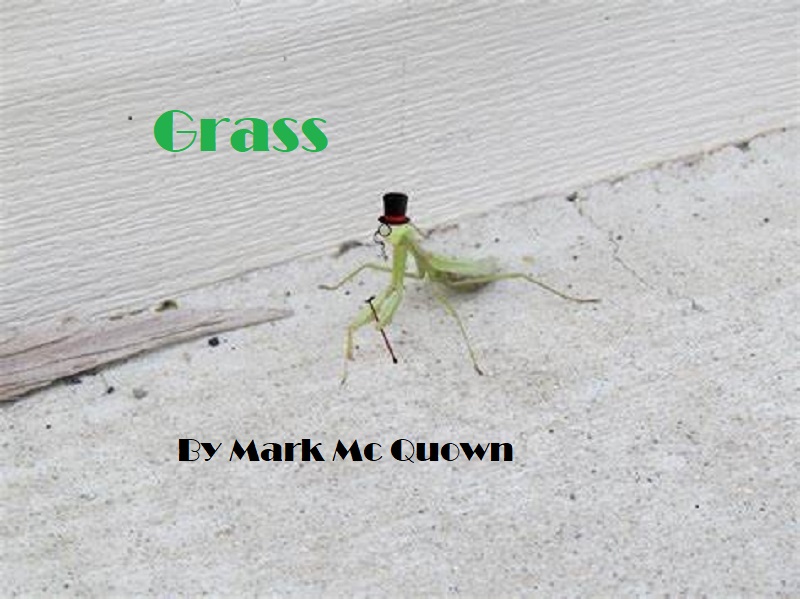 An eleven-year-old autistic boy discovers a whole other world under the canopy of grass in his own front yard. Once there he becomes frightened that he may not be able to come back, but he is assisted, by a number of small creatures and a Goddess, in coming home as a whole boy with no autism.

Cache is an eleven-year-old boy with autism who is taken out every morning to sit in his rocking chair on the porch of his southern California home near Hollywood. In his chair he surveys the block, watches the children play and prays that one day he to will be able to play like other children.


Cache returns from the world under his grass and joins his parents as a miracle, a normal functioning boy, only Cache has a real secret about the other world which helped him so much understand how he was different from others and how he could help himself be like them.

I am a produced screenwriter and have already written one screenplay from my other, unpublished, fiction novel, "Marlowe", about a mouse and two teenagers who save the world from a killer virus, much like the one we face today. Marlowe was written four years before the virus ever came to us. The book Grass is shorter than Marlowe and would take two screenplays or one long one to cover the whole story. Grass is an very exciting tale about the will and mind of an eleven-year-old boy with autism who discovers another world under his own lawn, where he has no autism and looks normal to the rest of the bugs and insects which live under the canopy of grass in front of his porch.

Grass by Mark Mc Quown Synopsis Cachi is a twelve-year-old, Hispanic boy with autism. He lives with his parents Salma and Antonio who make excellent money as writers in Hollywood – Hispanic writers so their success is exceptional. They live just outside of Hollywood in a small, modest home with a house keeper named Marta who also lives in a small back-house on the property. Cachi spends his days sitting on the front porch in a rocking chair, rocking and looking at the grass lawn in front of him, and the boys and girls on the street playing together. The porch has barriers so Cachi can not fall off or run away if he could run except Cachi does not need to run. He has created in his mind a hero’s journey underneath the grass from his porch to the sidewalk by the street. Cachi has set in his mind that if he makes that journey to the sidewalk and back, that his autistic condition will disappear. He knows it will work. He knows he will not fail so the only problem that existed was when to go. On a certain day in the Winter, moving on towards Spring, Cachi decided to go. He sat in his rocker, rocked back and forth slowly, slowly speeding up as he concentrated on one square inch of grass in front of him, and at a certain point and speed of his rocker, he jumped in his mind, across the porch barriers and down deep under the grass and onto the bare earth. From that point of time on into the story, Cachi found a way to exist in two worlds at the same time. His normal daytime world where he sat in the rocking chair, and the world under the canopy of crass where he could send his mind while his body still rocked on the porch. Under the canopy Cachi met creatures in the bug and insect world and became friends with a Praying Mantic named Memo (me – moe) who wore a black top hat and carried a walking-stick and spoke to Cachi. He was introduced to Myrrh, a Goddess of the world under the canopy of grass and she and Memo helped Cachi to come out of his autistic state and become the boy of his dreams. From there Cachi’s story goes into freefall as the world finds out about his adventure through Cachi writing a screenplay titled, “Grass”, which goes all the way to becoming a movie and almost the downfall of Cachi and his entire family. Through many stories and many characters, driving the family into hiding and then back home again until, finally in the end Cachi and his family escape the ugly desires of a world public who live on Media exploitation. They carry a secret about Cachi which no one in the family will ever tell again so the family will be safe, and that secret is that the story was true. It ends with Cachi and Memo discussing the future of other worlds. Short writing biography for Mark Mc Quown 2021 Mark Mc Quown is the co-screenwriter of the feature, “PJ” (now titled, Heaven’s Messenger”), starring John Heard, Vincent Pastore, Robert Picardo, Hallie Kate Eisenberg and company. This film is partially based on Mark’s award-winning play PJ. Mr. Mc Quown has won many writing awards including the following; “The Rocking Horse Christmas”, first place in the animation genre at The Santa Clarita International Film Festival in 1997, Quarter Finalist in The Chesterfield Screenplay Fellowship in 1997 with “Pier 21”, Semi Finalist in The Chesterfield in 1998 with “The China Tiger”, Quarter Finalist in 2000 in Scriptapalooza with, “Jane The Legend of Mountain Charley”, Finalist in The International Family Film Festival 2005 with the animated feature, “The Cat and The Rat” (co screenwriter), Quarter Finalist in The Fade In Magazine Screenplay Contest in 2005 with, “The Missing Link” and Quarter Finalist in The Zoetrope contest in 2007 with “The Sudan”. Most recently his full-length play, Resurrection Of The Snowbird was The Finalist in The Moondance International Film Festival in Boulder, Colorado and his screenplay, “The Contractor” (co-writer) reached the Semi Finals of The Fade In Awards Screenplay Contest, 2015. Mr. Mc Quown has an MFA in Directing for the Stage from The School of Theatre, Film and Television at UCLA. He is a member of AEA, SAG/AFTRA, The New York Dramatist Guild, Association of Los Angeles Playwrights (ALAP), InkTip.com online screenwriter service, The Playwrights Sandbox, Eagle Rock.

Specific to Hollywood and those in the Entertainment business.