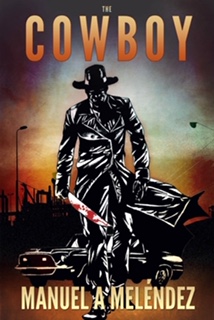 The Cowboy is a crime tale about a serial killer who terrorizes the streets of New York, also one of the greatest manhunt between two detectives who, at whatever cost, will do everything in their power to end the killer's rampage.

The Cowboy story begins when a twelve year old boy is taken to an asylum by his father, with the false accusation that the boy killed his mother. Inside that institution, he becomes an experimental tool, transforming him in a vengeful serial killer, preying on those he feels created him.


After a massive roller-coaster of a manhunt, Detectives Delgado and Crocitto, with the help of a feisty young woman, Rebecca, the Cowboy's killing days are over. But with shattering consequences.

The perfect combination of the gritty, crime story, which brings the essence of the pulp fiction from the detective genre of old. The villain, a masterful foe with a vendetta against those he holds responsible for the tortures he suffered inside the asylum that was his home since he became an inmate at the age of twelve. At their mercy, through experimental drugs, he was shaped into a killing machine. Enters, two seasoned detectives, who, at whatever cost, to both their professional and private lives, will do everything in their power to end The Cowboy's rampage. The action-packed story is an excellent tale, that will grasp the viewers from the very start, until the heart-stopping, exploding, blood-curdling end.

Manuel A. Meléndez is an award-winning Puerto Rican author, born in Puerto Rico and raised in East Harlem, N.Y. He is the author of two mystery/supernatural novels "When Angels Fall" and “Battle For a Soul”, five poetry books, “Observations Through Poetry”, “Voices From My Soul”, “The Beauty After The Storm”, “Meditating With Po- etry”, and “Searching For Myself”. Two collection of Christmas short stories, “New York-Christmas Tales Vol. 1 and 2.” Two collection of supernatural horror stories, “Wicked Remnants” and “Outbursts of Horror” a collaboration with El Davíd. Two novelettes, “In the Shad- ows of New York”. “Battle for a Soul” was awarded in the 2015 Inter- national Latino Awards for Mystery Novels and “When Angels Fall” was voted by the LatinoAuthors.com as the Best Novel of 2013. His story “A Killer Among Us” was published by Akashi Books in “San Juan Noir” anthology. The author lives in Sunnyside, N.Y. harvesting tales from the streets of the city.