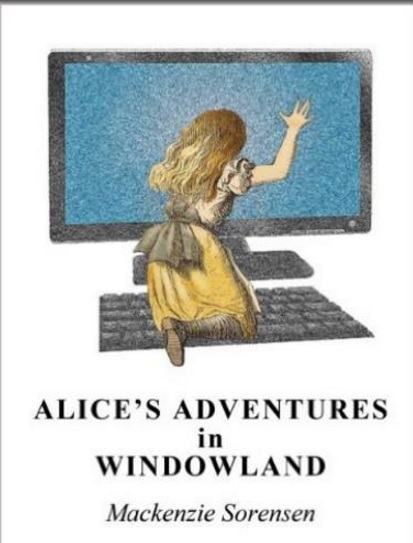 Alice is sitting at her desk looking at her PC. She then goes through the screen and enters a world of talking pixels, strange characters at a tea party, and finds herself photoshopped. The story mirrors the original chapters of Alice in Wonderland and has hidden anagrams and references.

Alice goes through her computer screen and meets 'Googy' the man on Google maps. He directs her to a train where she meets her first characters. During her time in Windowland she has similar experiences to Alice in Wonderland except that she is in a modern technological world .


The end of the story is a court case, where Alice finds herself facing a judge, or is it Judge's Wig mushroom, and it all whirls into a maelstrom of chaos.

This book would be perfect for animation. It has many diverse characters who are quirky and amusing. It has songs, it has poems and even a voyage into Facebook. It has a lot of dry humour and wordplay. It could resonate with all ages. Many of us have read Alice in Wonderland and Through the Looking Glass and this is a modern day take on how her world might seem if she wandered into a dreamy state today. It does have hidden anagrams and references throughout. All of the characters could be developed and with the right voiceovers could be a great movie.

Mackenzie Sorensen is English and currently living in California. She previously worked on two newspapers in UK, writing a weekly column about her experiences. She is also an artist working with watercolors, acrylic and silver. A great lover of Alice in Wonderland, one day she started to imagine if Alice visited today's technological world and what she might see.