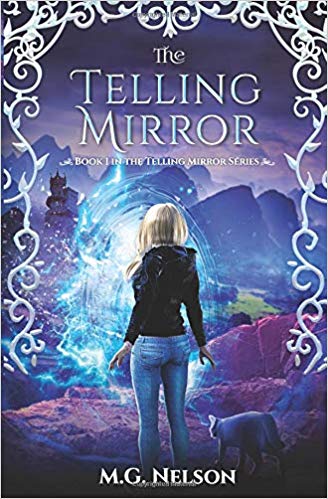 The Telling Mirror is the story of Sig and her cat-turned-human who enter an alternative world through a portal and find themselves on a perilous journey to find Sig’s long lost father and to reclaim Reggie’s throne.

Sig runs away from her uncle's farm to find her father and is propelled through a portal to future N. Europe after climate change and war has driven the population (both human and fantasy) north of 45 parallel north. She is joined by her barn cat, Reggie, who regains his human form in this world.


Sig and Reggie join his army, other allies and Sig's father to fight Prince Reficul and his mother, Lady Nastella, for control of Podocia. After a hand-to-hand battle with Nastella Sig is blasted back to her farm and we're left wondering what happened to her dad, Reggie and the rest.

Name: Sig which is short for Signe

A great adventure-fantasy book, The Telling Mirror would be a great adaption for the screen. The main character, Sig, is a resourceful, yet bratty, kid in a not great situation seeking her long-absent father. She, along with her barn cat turned boy, Reggie literally fall into a fantasy world where their quest to find Sig's dad leads them into one perilous situation after another. They overcome terrible situations such as Sig's almost marriage to an ogre, being indentured servants to a corrupt magician, a near trampling from rampaging centaurs, and being captured by pirates. After going through all these crazy events they are imprisoned by the evil prince, Lord Reficul, and his power-hungry mother, Lady Nastella in their mountain stronghold, Mt. Tsor. The prisoners, mainly soldiers and sailors, stage a breakout and Reggie and Sig are saved by an elderly Scandian, Snorre. One insane tobaggan ride down the mountainside later they are with Snorre's clan, The Snow People, where after a life-threatening prison damp illness Sig and Reggie join the Scandians as they link up with the rest of the rebel forces, including Reggie's noble family, and Sig's dad, Dave, in a battle against Prince Reficul and Lady Nastella.

M. G. Nelson wiles the time away crafting novels and puttering around on her lovely farm taking care of her pups, cats, pygmy goats, chickens, and cows. At times she pulls on her big girl pants and travels to veterinarian clinics to practice the art of being a veterinarian.