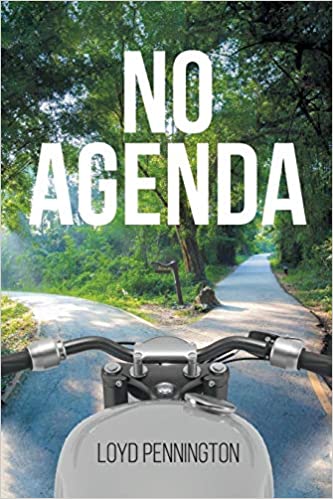 How many of our daily decisions create ripple effects across the lives of people we know and don't know? This is a fast-paced and provocative tale about decisions that altered and even ended lives just like you and me. Get lost in the story but consider the lesson.

This is a story about a good guy by the name of Pierce Ellis. He embarks on a journey on his motorcycle to explore and enjoy the open road but the road isn't all that contains twists and turns.


This story will leave you thinking about all that happened and how so many decisions affect so many lives.

This story will keep you guessing and engaged. It is a very fast-paced tale with characters that you can identify with. The tale takes place over just a few days but there was a lifetime of events that were all gathering and waiting to unfold. The choices made along the way would eventually tie all of these lives together in a way none would have imagined. It is a tale about us all in many ways and one that will leave you thinking for a long time to come.

A Southern boy that has always enjoyed telling and hearing good stories. A lifelong writer and student of the human experience. Loyd found this story rambling around in his brain as he rode his motorcycle on a trip to Savannah. It is a tale that intrigued him and he hopes it will entertain you as well.

Pierce is an ordinary man who has a hobby of riding motorcycles. Jeremy is a teenager marked by the absence of his violent father. When Pierce decides to leave the house for a ride on his motorcycle, he couldn't imagine that he would meet Jeremy on the way and that their lives would be changed forever.

The profile could be improved. Pierce is more of a protagonist than a character with a logical role. Jeremy is not exactly the antagonist. He's just a teenager frightened by unfortunate events that brought him to a tragic end. The antagonistic force for both would be the force of destiny that put them in the wrong place, at the wrong time.

The narrative begins with an atmosphere of tension. It is raining, and Pierce is about to get his motorcycle. His wife is worried about him. This beginning gives us indications that something will happen to Pierce and holds our attention.

The structure is a little truncated. When we start to engage the story, new characters are introduced as sub-chapters -instead of just included in the story- and that takes some of the excitement out of the narrative.

The hook is the crossing of these two lives in a unique and fatal destination. It is to follow these two stories in parallel, knowing that they would cross at some point.

The story could have a little more dramatic impact and character development to reach a wider audience.

No. It is a story that could raise reflections on our actions and choices, but it would need further development in structure and narrative.

IRREVERSIBLE: THE STORY OF THREE PEOPLE AND HOW THEIR CHOICES INFLUENCE THEIR DESTINY THAT NIGHT. YOUR NAME: WE FOLLOW THE PARALLEL STORIES OF TWO CHARACTERS, WHO MEET AT SOME POINT AND STAY TOGETHER IN THE END.

The two stories take place in parallel times, but in different narrative moments. We first learn about Pierce's story and watch him "dying" in an accident. Then we find out who Jeremy is and follow his story until he finds Pierce, steals his motorcycle, and dies in the accident. The second story completes the gaps of the first one. They are temporally parallel but complement each other in subsequent narratives.

The author describes the characters and their backstories well. Thus, we were able to empathize with them. Pierce is a family man who finds his time of relaxation on the motorcycle, his favorite hobby. His complicated past makes us connect with him even more. Jeremy is also a likable character, despite his crimes committed in the end. He is a complex character who has his own traumas and tries to live well with his own life. They are two good main characters who have a tense and dramatic encounter.

It is not a rare gem. The narrative would need further development to become more unified with the film's theme (which is clear in the profile).

The theme of the story is: "Choices are capable of changing other people's destiny." However, this theme is not very visible in the narrative, mainly because what happened to the characters seems more like a chance of destiny than, in fact, the result of choices. Jeremy kills his father by accident and runs away because he's afraid. He steals Pierce's motorcycle, trying desperately to escape the police, and ties Pierce's ankles and hands because he is too nervous to think properly and has no experience with the crime. These are choices driven by the natural reaction of a human being. Pierce left the house to have fun, stopped at that parking lot, and was robbed. It is also a sequence of events that seems natural to an ordinary person. The theme mentioned in the profile is exciting and matches very well with a story involving two characters in parallel lives. However, this theme is not visible in the narrative. It would be interesting to mark these decisions more deeply, to give more meaning to those moments that led them to cross paths. Since they are the main characters and we are talking about choices, they should be more active. They should consciously choose the ways that would take them to that encounter. It would make the theme more apparent. The characters and their backstories are interesting. Jeremy is a very complex character that could be further developed and could be more present. He has several layers of personality and makes us have a lot of empathy, despite the crimes committed. Jeremy's backstory, however, seems too long. When his story is introduced into the narrative, we spend a long time getting to know his father, his drinking habits, and the crime committed against his mother. I understand that it is important to present the source of Jeremy's traumas, but perhaps a shorter backstory could be more effective. The abrupt introduction of characters, separated by sub-chapters, does not seem like an organic way of introducing them. Everyone lives in the same universe, at the same chronological time, so everyone could appear on the same narrative line. These entries separated by names/topics makes the narrative truncated. In general, it is an exciting idea, with good characters and an intriguing theme, but the narrative needs further development to achieve more significant dramatic potential.