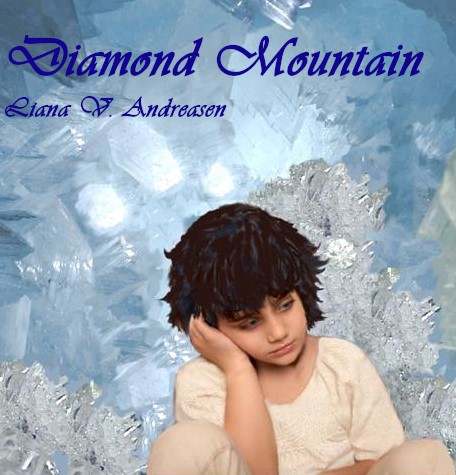 On top of Diamond Mountain, in Diamond Vale, 10 y.o. Benya loses a cooking contest. She is banished with her family down a forbidding mountain. Going through a portal, the family is duplicated; they wonder on the mountain and in a world of sentient hills. A god tasks Benya with saving the world.

At the top of Diamond Mountain, in glittering Diamond Vale, food is a precious resource. When orphan Benya loses her best friend, who is now King, she sees a way into a better life: by challenging the Royal Chef. Yet she loses the contest and is banished with her adoptive family.


The God of Morning tasks Benya with saving the world from human invaders greedy for diamonds. To accomplish that, she has to find her double in the other world, and also defeat a goddess to earn her help. After a magic battle, the goddess gives her a choice: become a goddess, or remain human.

This is a fantasy akin to Miyazaki films, Harry Potter, Golden Compass. In a world made of diamonds, two portals have opened: one full of danger, one full of hope. An orphaned girl has to decipher ten clues on a magic white horn, to save the world. At the top of Diamond Mountain, in glittering Diamond Vale, food is a precious resource. When ten-year-old Benya loses her best friend, who is now the King, she sees a way into a better life: by challenging the Royal Chef. If she fails, she will be banished, and so will her adoptive family. The town's guardian, sage Cloud Shepherd, has been waiting a thousand years for a hero to stop the Root of Evil, which is now ready to bring an army from Earth through the dark portal. He sabotages the cooking contest and sends Benya on a quest to save the world. Benya is banished down the mountain, along with her trickster brother, her melancholy sister, and their parents. When they cross through the portal of hope, exact copies of each of them are created. One family remains in the diamond world, while the other travels to Anithonia, a world of sentient hills, strange creatures, and magic beings. To defeat the terrible army, Benya Two must earn the help of the gods who live on the Seven Blue Mountains. Benya One and her family are dragged into a clan war, and their survival is uncertain. In Anithonia, Benya Two must persuade a goddess to help her bridge the two worlds and prevent the war. Yet the goddess’ help will not come easily.

Liana V. Andreasen originally from Romania. She moved to the US for graduate school (MA and PhD in English), and she teaches at South Texas College. Her book of literary criticism, The Fall of Literary Theory, appeared at the end of 2017. She received a Pushcart nomination from Turbulence Magazine and The Raven Chronicles and she published short stories in Fiction International, Calliope, Lumina, Scintilla, The Quail Bell, Eureka Literary Magazine, and many others. She is a member of SCBWI