Upside Down in a Laura Ingalls Town 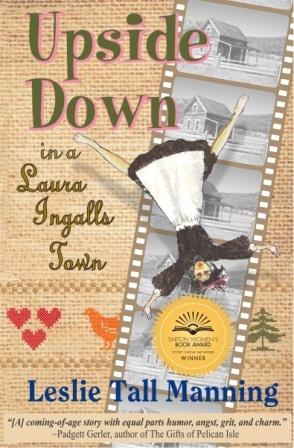 An out-of-control sixteen-year-old finds her life turned upside down when she and her family become the stars of a reality show set in 1861 in the North Carolina Backcountry. But can a young girl’s wishful heart surrender to a time and place she believes she can never call home?

Sixteen-year-old Brooke Decker stumbles onto the porch drunk after partying with boys she doesn't know. Her life has grown out of control since her mother's death eighteen months earlier. This is not the first time Brooke has acted out, but it just may be her last.


Brooke says goodbye to the 1860's life she has lived for four months, and finds that her mother has been a part of her all this time. With her father receiving a job offer in Europe, Brooke sees their new life ahead as a wonderful adventure, one she will grab with a renewed spirit.

Upside Down in a Laura Ingalls Town would make a lovely movie or a perfect limited series. It is a relevant story reminding young girls how easy life is today compared to their ancestors prior to the 20th century. What makes this tale different is that it is NOT REALLY set in the late 1800's but rather a reality show that our star, Brooke Decker, finds herself unwillingly a part of. Since her mother has died, Brooke is acting out in all kinds of self-harming ways, and Dad finds a way to rein her in when their family is chosen to spend four months in the NC backcountry. Past meets present in a way that allows a female audience to see what it would have been like to keep the fire stoked, wear a tight corset, milk a cow, grow one's own crops, fall head over heels for the son of a local merchant. And all without the complications of modern-day trappings, like blow dryers, cell phones, social media, and pink hair dye. But there are other complications: the Civil War looms; Dad hides a secret; a local slave proves smarter than her masters; and Brooke must find a way to survive in a world nothing like her own...all while the cameras are rolling.

Leslie Tall Manning is a full-time writer of Adult fiction (GAGA, MAGGIE'S DREAM, and KNOCK ON WOOD) and Young Adult fiction (UPSIDE DOWN IN A LAURA INGALLS TOWN and I AM ELEPHANT, I AM BUTTERFLY). She spent a third of her life in Western Maryland, another third in Southern California, and now resides in Eastern North Carolina, surrounded by historical Victorian houses, ancient graveyards dripping with Spanish moss, and two rivers ripe for sailing. She is proudly represented by the TriadaUS Literary Agency. Awards: GAGA: Self-e Library Journal Selection; Taleflick Pick UPSIDE DOWN IN A LAURA INGALLS TOWN: Sarton Women's Literary Award; North Carolina Project Award; TaleFlick Pick; TailFlick Road to Production Semi-Finalist KNOCK ON WOOD: IndieBRAG Medallion

A rebellious teenager struggling to cope with the death of her mother is forced by her father to participate in a reality show along with her little sister. In the production, they are forced to live as in the year of 1861, without any modern amenities. Despite the many difficulties, the strange journey they go through end up uniting the family again.

The premise of a nostalgic reality show serving as a manner of reuniting a broken family.

The writing feels somewhat too conservative towards the main character.

A family having to live as people used to 160 years ago.

It could, especially if the characters are really charismatic in the adaptation, since the premise itself is very interesting.

Not really, it feels a little too simplistic in terms of relationship development in order to be Awards material.

THE 1940S HOUSE - A REALITY SHOW IN WHICH A MODERN-DAY FAMILY HAS TO LIVE AS A MIDDLE-CLASS BRITISH FAMILY DURING WORLD WAR II; WESTWORLD - IN THE SERIES, PEOPLE VISIT A FUTURISTIC THEMATIC PARK IN WHICH THEY ARE TRANSPORTED TO THE WILD WEST, WITH THE AID OF TECHNOLOGY AND PROGRAMMED ROBOTS.

Even though the premise is original, the main conflict is very common and predictable. In order to become more unique, the relation between the central characters, as well as their personalities, should be more complex and intriguing.

They are all good, decent people, prone to errors and mistakes, trying to live their lives the best way they can after a painful familiar tragedy.

Not really. Despite the intriguing premise, the central characters and conflicts could be more unique and better developed.

The main premise, concerning a family having to deal with their own emotional problems amid the hardships of an unforgiving reality show, is very intriguing and interesting. This could be great material for a film or even a series adaptation, since the narrative could be elongated to become more of a problem-of-the-week kind of show. However, there are also some things that should be improved. One of them is the characters' personalities and their inner and outer conflicts. Those are too common and somewhat uninspired, and could be a little too boring for viewers to follow in an adaptation. Also, the characters are, with the exception of the protagonist, not all that remarkable. So, investing in further developing them and adding more layers of complexity would be great. The author's writing is also very good, it somehow grabs your interest from the very beginning. In spite of that, the story is sometimes uneventful and repetitive, which could be a problem in an adaptation, that should attract the audience's attention along the whole projection. Maybe a more direct approach, cutting down those emptier parts, would translate into a better adaptation. Despite all those issues, the book does show promise and should be evaluated with an attentive eye.